The music delivers cold, mechanized power with almost inhumanly fast, ridiculously precise drumming and riffing. The rhythms have an industrialized quality — jabbing, hammering, jolting, in a start-stop flurry of pneumatic, piston-driven blows, with the drums, guitars, and bass often tightly in sync. The sound conjures mental images of some giant robotic factory in overdrive, fabricating ominous ranks of weaponized cyborgs ready to begin crushing and blasting our frail humanity. 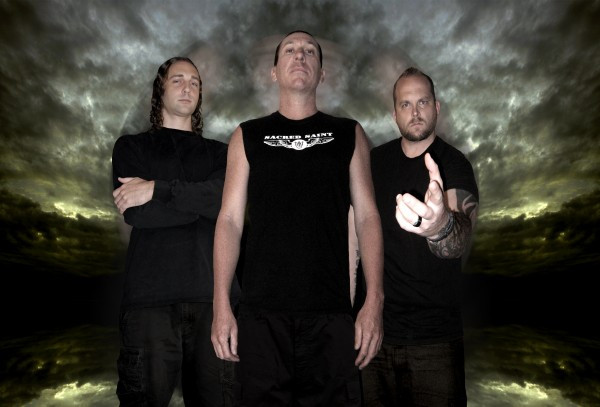 The futuristic feel of the music is enhanced by sparingly used but quite effective electronic samples and synthesizer ambience and by eerie/spacey lead guitar passages, which create an ethereal and sometimes languid sense of atmosphere that contrasts with the cybernetic intensity of the driving rhythms.

But the album is an hour long, and an hour of non-stop hammering and precision blasting, even when it’s delivered as immaculately as it is on Reprisal, and even when it’s leavened by ambient moments, would be almost overwhelming, running the risk of desensitizing and exhausting the listeners instead of invigorating them. But Devolved avoid that peril in two principal ways.

First, all that munitions-grade drumming and industrial-strength pneumatic riffing frequently turns into a heavyweight platform for some truly off-the-chart guitar leads and guest solos. The rhythm instruments lock into a repeating groove that you can’t not headbang to and then the guitars just take off, and they usually do it in a way that creates striking contrasts with the relentless mechanized brutality that provides the supporting foundation. For example:

There’s a real jaw-dropper of a prog-metal styled solo in “Embodiment” that was contributed by Nate Vennarucci (Ontogeny, Anomalous). There’s a flowing, darting, explosively acrobatic solo by Franscesco Artusato (All Shall Perish) on “Corrupted Mind Processor”. You get a swirling and eventually fret-burning burst of shred in “Apocalyptic Visionary” delivered by Malcolm Pugh (Disktreet, A Loathing Requiem). And there’s a beautiful solo by Vishal Singh (Amogh Symphony, Robots Pulling Levers) on “Reprisal of the Damned” that moves fluidly and soulfully in stark contrast to its accompaniment. And that’s not counting all the slithering, squirming, moaning, piercing solos and leads performed by Mark Hawkins.

Second, the music benefits tremendously from Mark Haggblad’s vocals. He delivers an amazing array of harsh vox, from guttural growls to bestial howls to prolonged hair-raising shrieks (plus some ghostly/ghoulish spoken words) — and he moves from one to the next to the next in an instant, reminding me a lot of The Black Dahlia Murder’s Trevor Strnad. With the instrumental performances on the album so amazing, a less capable vocalist would fade into the wallpaper, but Haggblad has got the chops to stay right with his two bandmates. He adds an element of wild, malignant bestiality to the mechanized pummeling.

And speaking of beasts, I have to say a few words about John Sankey: What he does behind the kit is just ridiculous. He plays at warp-speed, with amazing control, a human machine-gun on full auto.

The album ends with a bonus track, a cover of “(Cadence of) the Dirge” by Exhorder from that influential NOLA band’s 1992 album, The Law. Devolved’s performance is less sludgy and more angular than the original. They’ve seized on the song’s killer riffs and made them their own, while extending the original’s surprising instrumental finish in a way that makes this cover one of the album’s highlights.

In a nutshell, Reprisal delivers a riveting hour of blazing, technical brutality, eerie atmospherics, and mind-bending solos that shouldn’t be missed. It’s a grim vision of the future, but it makes the present a whole lot sweeter.

To date, only one song from the album has been released for streaming, and it takes the form of a lyric video for “Supremacy Enforced”. But as of yesterday we also have a video compilation of samples from most of the album’s songs — though it barely scratches the surface of what lies in store. Both of the vids are below:

The cover art for Reprisal is by Michal Karcz. The album will be released by Unique Leader on November 20. Tony Campos (Soulfly, Prong, Ministry, Asesino, ex-Static X) provides guest vocals on “Terminal Enslavement”. And Devolved has a Facebook page at this location.