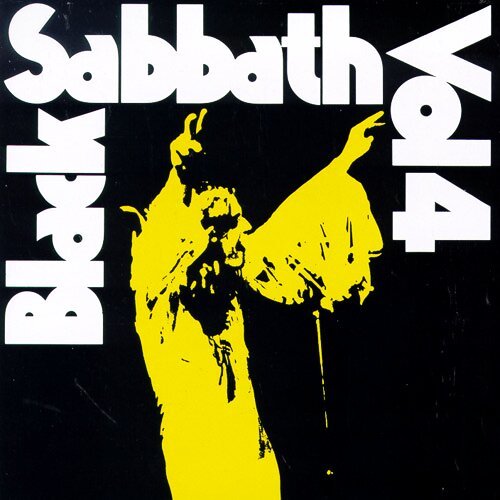 As I’ve done in the past, I’m stealing from my fellow metal blogger Full Metal Attorney, who is a lot more on the ball watching the calendar for events like this than yours truly. He discusses the significance of this album on his own site today, proclaiming it the pinnacle of Black Sabbath’s career, surpassing each of the band’s first three albums — Black Sabbath (1970), Paranoid (1970), and Master of Reality (1971).

FMA attributes the album’s excellence mainly to Tommy Iommi’s riffs, especially on “Supernaut”, “Wheels of Confusion”, “Cornucopia”, “Snowblind”, and the song he calls “the heaviest Sabbath song of all”, “Under the Sun”. But he also praises the performances of the rest of Sabbath — Geezer Butler, Bill Ward, and of course Ozzy.

As FMA himself acknowledges in the article, lots of people would disagree with him putting Vol. 4 above Paranoid and Master of Reality. He chalks that up to the presence of the weird experimental track “FX,” the relatively long acoustic instrumental “Laguna Sunrise,” and the piano/synth ballad “Changes” — but he asserts that these quirky, imperfect songs are precisely what has made the album so memorable after 40 years, in addition to all of the album’s phenomenal successes.

It’s been a long time since I listened to the first four Sabbath albums, and so I’m certainly not prepared to argue the critical merits and demerits of them, or to rank them on a scale of excellence. No doubt, Vol. 4 is an amazing album (and yeah, the riffs and soloing in “Supernaut” are fucken amazing), but for me, track-for-track, it’s not the most memorable. For me, that honor goes to Paranoid. In part, I suspect that’s because I associate it in my memory with other things happening in my life at the time I first heard it (that, and the fact that I played it non-stop for weeks after I got it). But in part it’s also because of the undying power of songs like “War Pigs”, “Paranoid”, and “Iron Man”.

Some people reading this post may be old enough to have experienced Sabbath’s first four albums when they were originally released, but probably not many. I’m sure lots of readers have never listened to all four straight through, instead being familiar only with certain landmark tracks from one or more of them. But I’m still curious about what folks think about FMA’s claim that Vol. 4 is the greatest Sabbath album ever. And in an effort to get some discussion started, let me throw out these additional questions, too:

Where were you in your own metal journey when you first heard Sabbath?  Did it come early or late or somewhere in the metal of your education as a metalhead? And did the music make an impact on you? Do you agree with FMA that “Under the Sun” is the heaviest Sabbath song of all? And finally, which album (or songs) have proven to be the most memorable ones to you?

Of course, be sure to read all of FMA’s article about Vol. 4 rather than taking my summary at face value. You can find it HERE. Now, some music from Vol. 4: