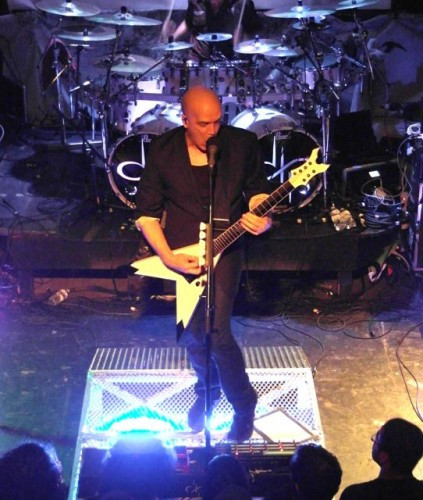 On the night of September 4, 2012, a group of friends and I were on hand at Studio Seven in Seattle to take in the first show of a North American tour featuring Katatonia, The Devin Townsend Project, Paradise Lost, and Stolen Babies, and I brought my fancy camera, which I still haven’t learned how to work very well. And yes, that means there will be a bunch of amateurish photos scattered around this write-up.

Two of us had bought VIP tickets, which gave us the chance to attend a “meet and greet” with DTP in advance of the show. As instructed, we arrived at the venue at 5:45 pm, and eventually a group of about a dozen of us were brought inside, given swag bags, and escorted to Studio Seven’s balcony bar, which was empty except for staff people getting ready for the night — plus Devin Townsend and two members of his live band, drummer Ryan van Poederooyen and guitarist Dave Young.

We spent the first 10 or 15 minutes talking with Ryan, who couldn’t have been more friendly and humble (and who clearly was in love with the songs DT had written for Epicloud). Eventually, we wandered over to where DT was holding court with the rest of our group of admirers, and he seemed very much the same person as he does on stage — full of energy and humor, making jokes and funny faces, and enjoying talking with all of us mostly tongue-tied well-wishers. If there’s a big rock star ego anywhere in his personality, it’s well-hidden. (We had talked earlier with one of the venue’s security guys who we know, and he confirmed the impression — that DT has always been outgoing and nice to all the staff people every time our friend has worked one of his Seattle shows).

We had our photos taken with DT and then were escorted back out of the venue to wait for the doors to open along with everyone else (though our swag bags contained VIP laminates that allowed us to get back in first). The goodies inside the bag also included a signed copy of the Epicloud CD, which hadn’t yet been released as of the time of this show.

Stolen Babies was the first act of the night. I knew nothing about them, but was intrigued by the stage set-up, which included a stand-up bass laying on its side, a big steel canister, an enormous drum, a bloody severed hand hanging from one of the mics, and a leopard-print rug under the drum kit. 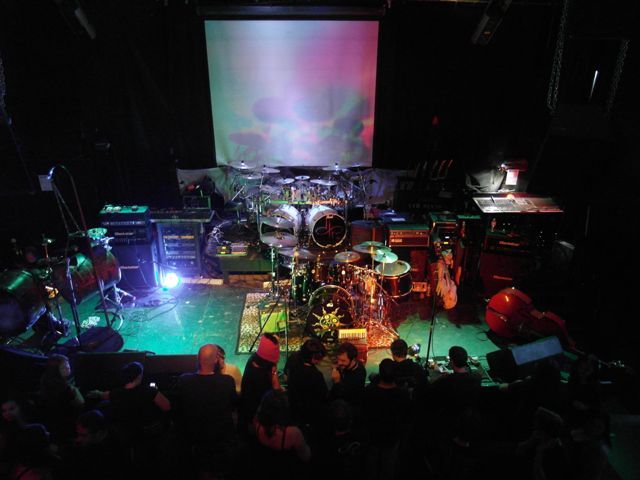 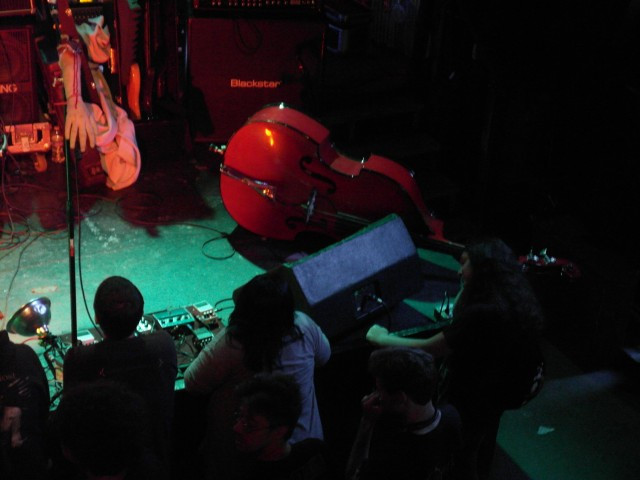 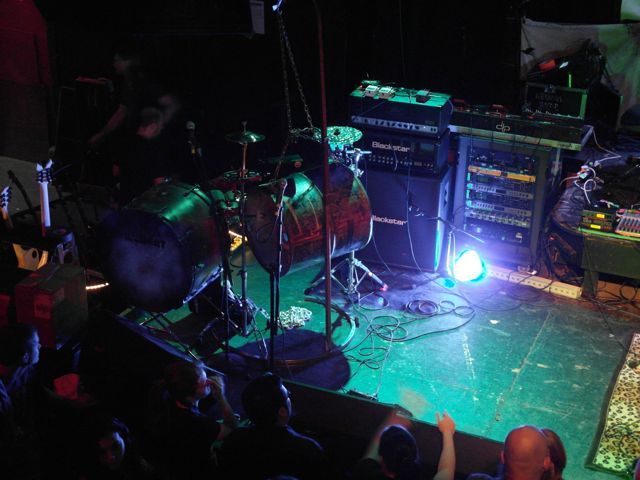 And when the vocalist, Dominique Persi, took the stage with an accordion, pigtails, and a mess of glitter on her face, I began to get an uneasy feeling. The drummer wearing a top hat and the bass player wearing knee pants and striped socks like a member of the Lollipop Guild didn’t put my mind at rest either. I was pretty sure this wasn’t going to be metal.

I’ll say this for Stolen Babies: they do play with a lot of energy and they’re in constant motion on stage. But the allure of the music eluded me. Avant garde punk cabaret is about the best way I can describe it. I guess I’ve become too much of a died-in-the-wool metalhead to get what Stolen Babies were doing. 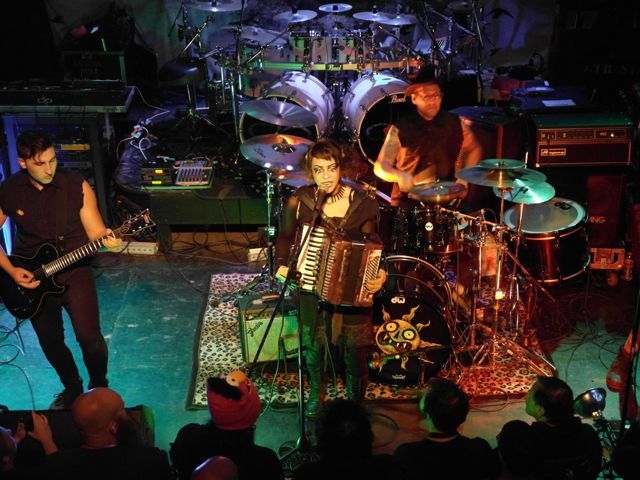 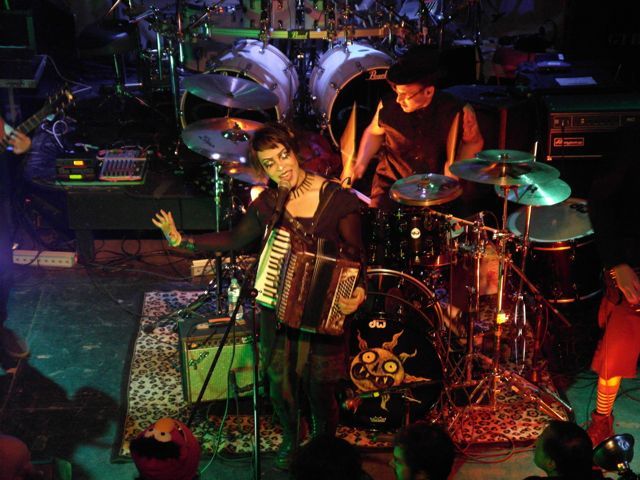 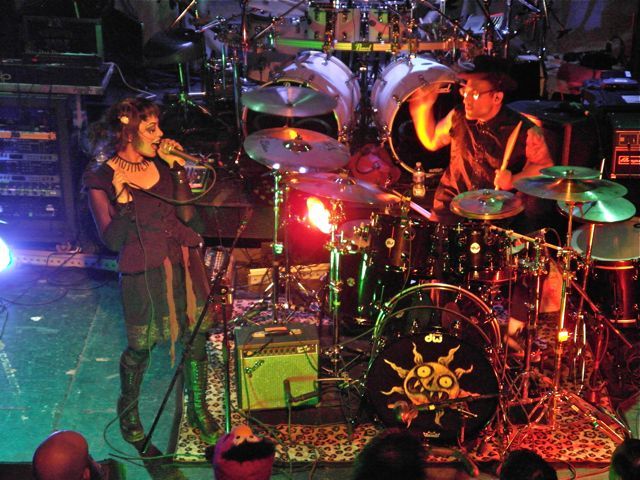 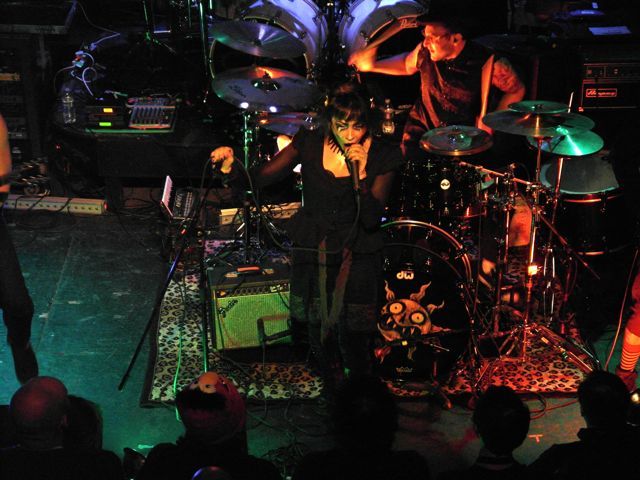 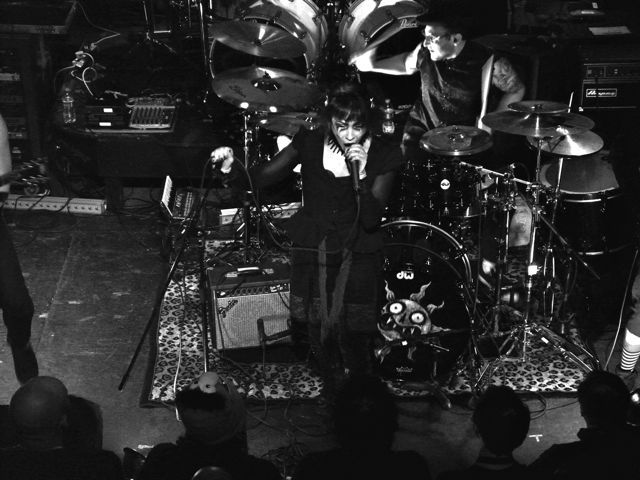 Paradise Lost was up next, making their first Seattle appearance in more than 20 years of making music. This band’s brand of gothic metal has never been one of my favorites, which is simply a matter of taste rather than critical judgment, though I did like their 2012 album, Tragic Idol, and of course their set included music from it.

Vocalist Nick Holmes seemed in something of a grumpy mood. He stage banter consisted largely of trying to exhort the crowd into a more enthusiastic response, yelling in frustration at one point, “now’s your chance, we might never be back in Seattle again!”

I spent most of the set looking at Greg Mackintosh, his face constantly shrouded in a mane of pitch-black hair, striking one badass metal pose after another and reeling off some great leads and solo’s.  I kept wishing the band would play a Vallenfyre song, just to ratchet up the heaviness factor. 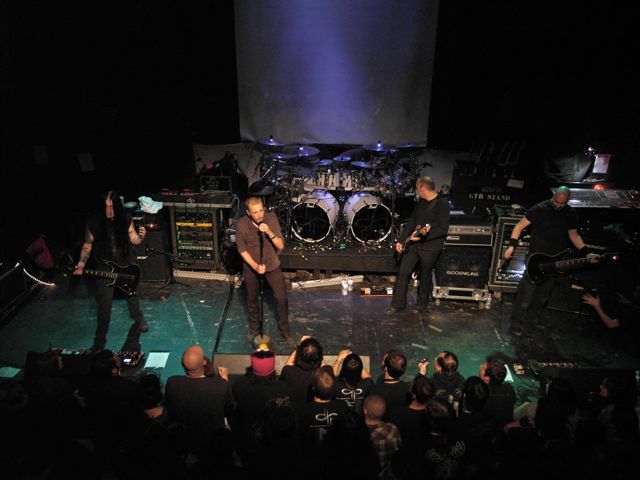 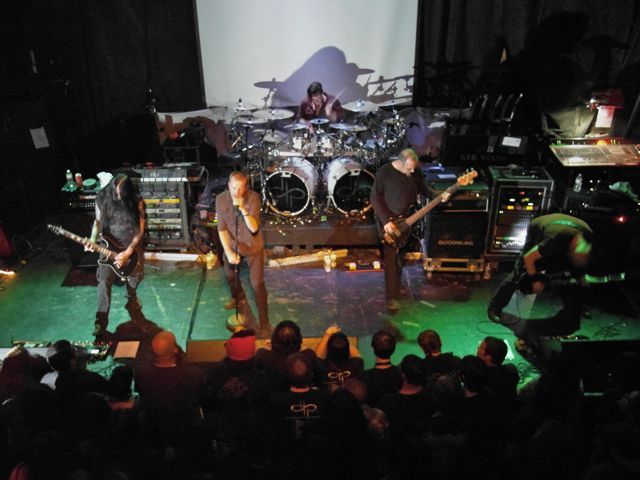 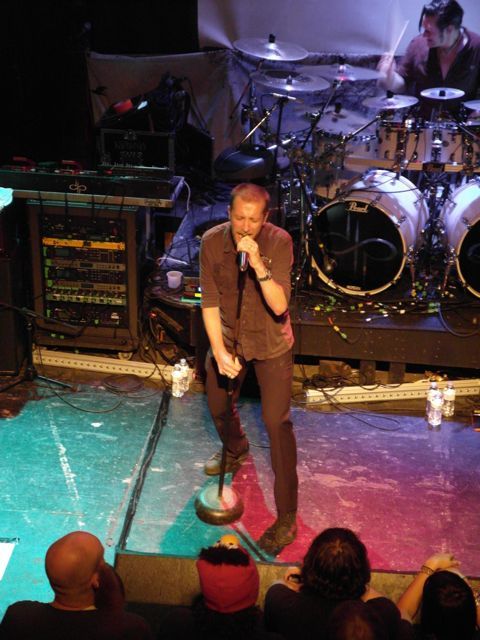 And then came the band whose presence was the main draw for me, following a 10-15 minute slideshow of all manner of pics that had been photoshopped to superimpose Devin Townsend’s face, wearing a variety of manic expressions. DT started the night by receiving a Burger King crown from someone in the front row and wearing it for the first song (and other goofy headgear followed that one before the set ended, including what looked like a Muppet and a top hat).

Townsend and his guitarist and bass player all performed while perched on what DT called “the Def Leppard platforms” — metal ramps outfitted with flashing lights that were constantly changing colors. And speaking of Def Leppard, at one point Hevy Devy joked (or maybe half-joked) that Epicloud was his chance to channel Def Leppard, Sade, and Seal.

I hadn’t heard anything from Epicloud before this show, other than “Lucky Animals”, but I heard a lot during this set — six songs from Epicloud. Though I had some trepidations about the album based on what I’d read about it, I really enjoyed the music, especially “Grace”, which had something like a lyric video playing on the screen behind the band as they performed it. As performed live, the song is flat-out powerful.

Accompanying the tracks from Epicloud were a variety of heavy numbers from other releases (and for some of them, Devy reached pretty far back in time) — “Regulator”, “War”, “Vampira”, and “Planet of the Apes” from Deconstruction.

I’ve said it before and I’ll say it again, on this, my third viewing of DTP in action: Devin Townsend and company put on one of the best live shows I’ve ever seen. He is a constantly entertaining presence, he’s got a truly incredible voice, he’s backed by some very talented musicians, and the music fuckin’ rocks. And I say that as someone who generally prefers metal that’s considerably filthier and more extreme than even the more maniacal music he’s been putting out in his solo career. 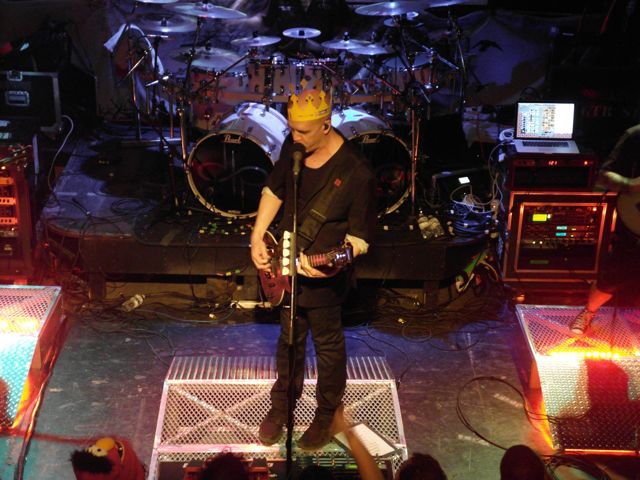 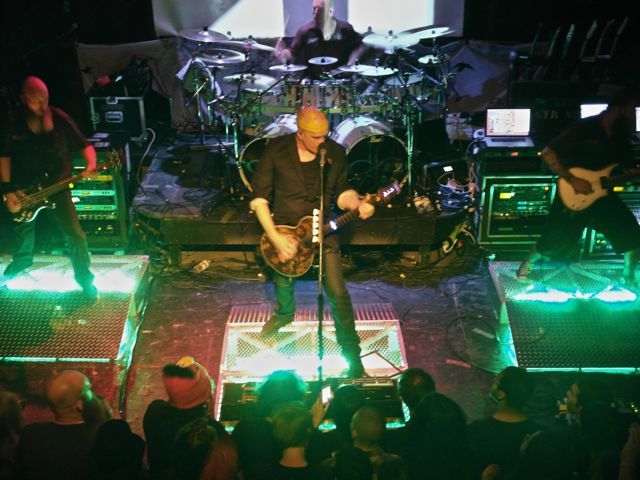 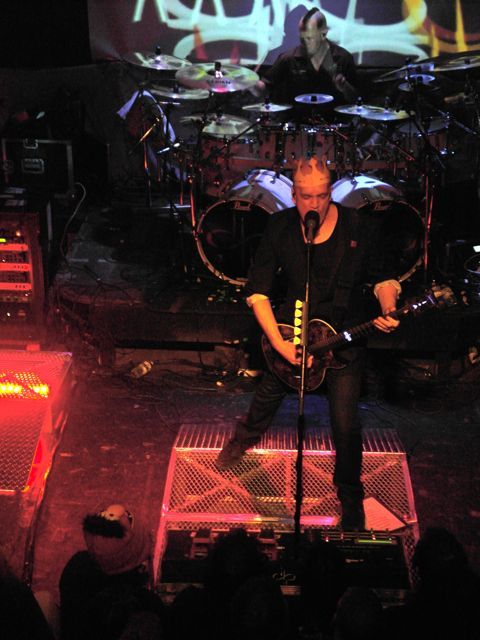 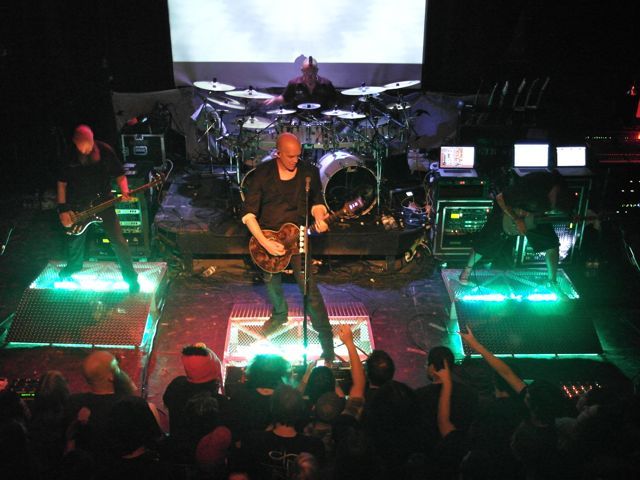 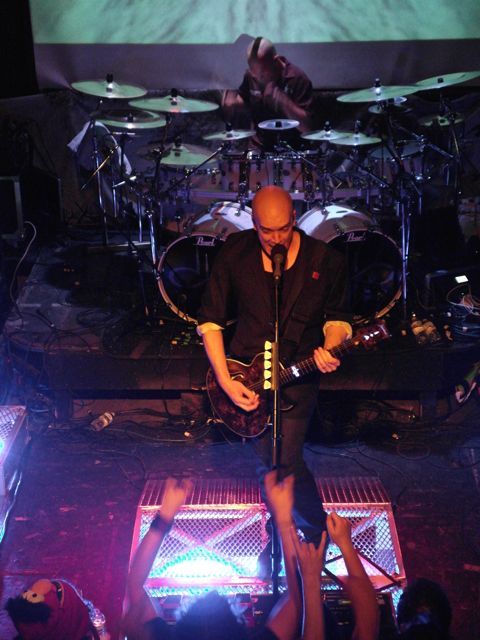 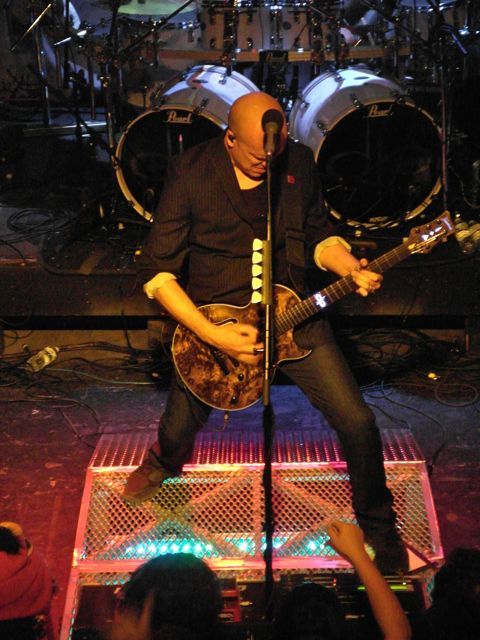 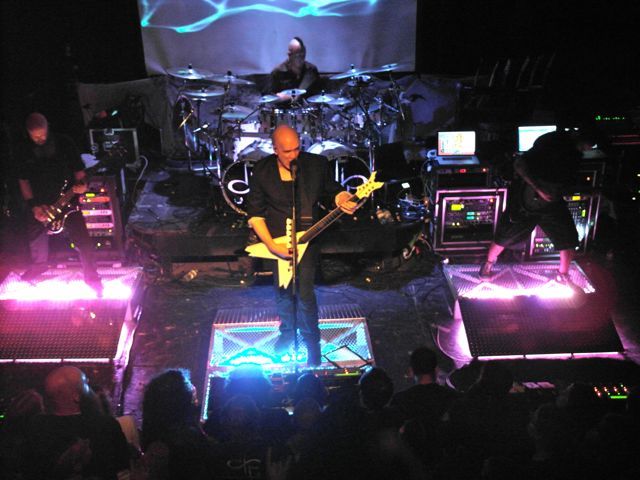 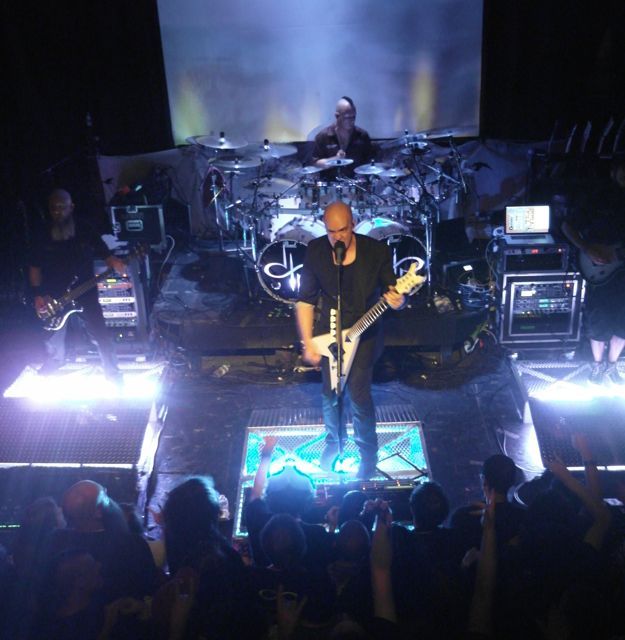 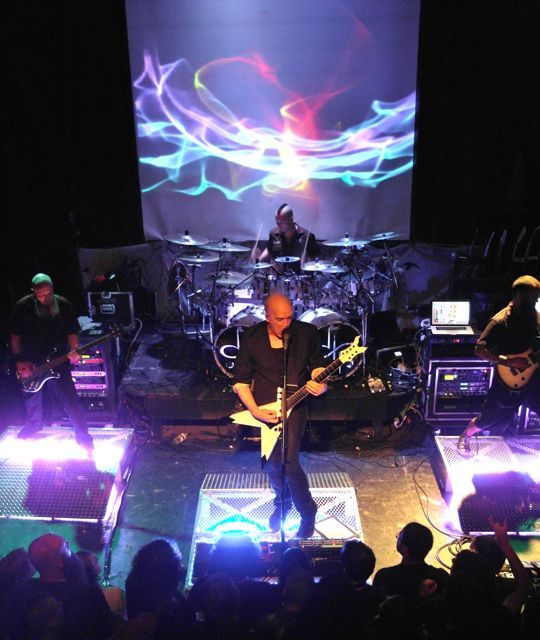 I was riding a pretty feverish high after the DTP set, and Katatonia brought the temperature down fast with a heavy dose of gloom and melancholy. I had seen them once before, and there’s been quite a line-up change since then, with a new guitarist and a new bass player. But as long as Jonas Renkse is behind the mic, I’m not sure it matters much who’s backing him up. The dude has a beautiful, distinctive voice. He also comes across very shy (though friendly) on stage, and its rare to get a glimpse of his face behind the cascade of hair that hangs in front of it almost all the time.

With a mix of songs from both the new album (Dead End Kings) and older ones, the set proved to be hypnotic, and heavy enough to be satisfying. Given my own peculiar tastes, I find that a little Katatonia goes a long way, but I didn’t lose interest during this performance. Still, for me, the highlight of the evening ended before Katatonia took the stage. 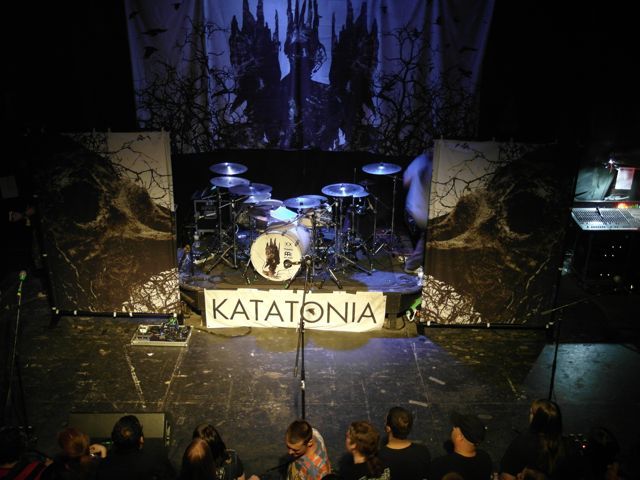 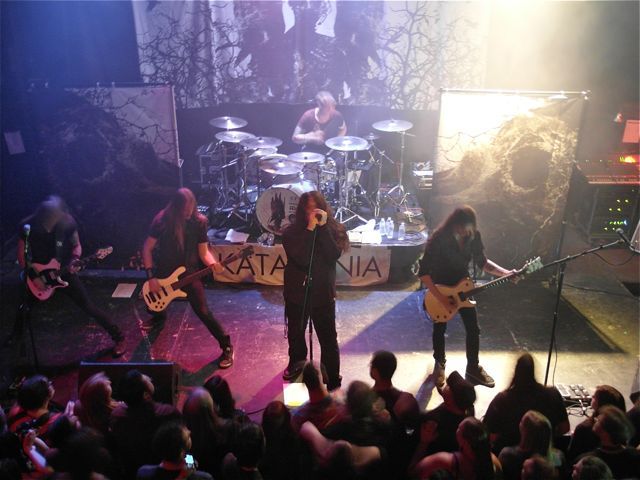 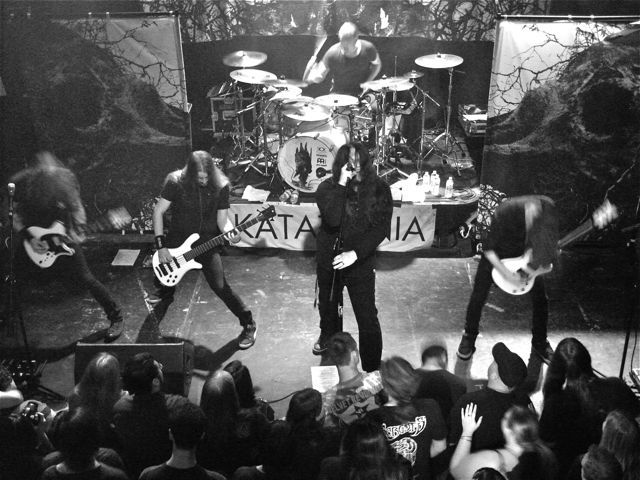 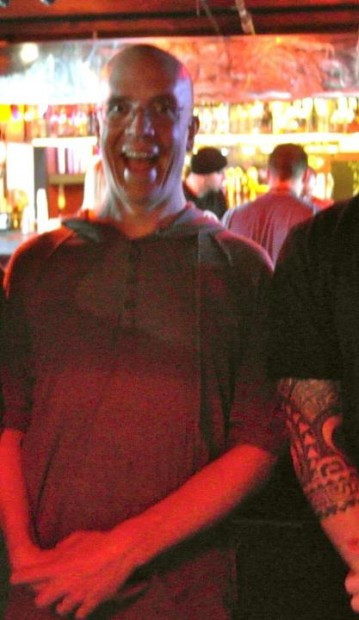