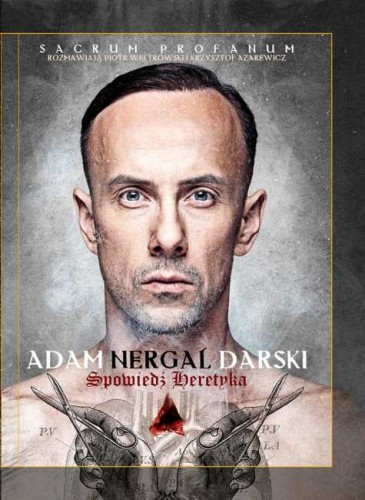 Behemoth’s Nergal has completed work on an autobiography, with the title of Sacrum Profanum — a title that presumably refers to the dichotomy between the sacred and the profane, which is a central characteristic of most religions. The book will be released next month in Poland, and unfortunately there are no current plans for it to be translated into English.

The book will be promoted through a series of video trailers that will appear on Behemoth’s YouTube channel. According to Behemoth’s label, Metal Blade, “the trailers will feature Nergal reading portions of the book, as well as acting out portions of stories, which Nergal describes as ‘some funny, some sad, some evil…some related to the band, some not.'” The trailers will be in Polish with English subtitles.

The first trailer went up for streaming today. The thoughts expressed are serious, though the philosophy is certainly not new — but the trailer is also provocative. Yes indeed, I do believe that’s a Bible that Nergal burns in the trailer. After being prosecuted repeatedly in Poland for doing the same thing on stage many years ago, he seems to be courting more legal harassment — and clearly gives no fucks about that. The last line of the trailer makes that even more abundantly clear.

Reports about the book indicate that much of it is an extended and wide-ranging interview of Nergal, rather than him or some ghost-writer laying out a narrative. No doubt, he has led an unusual life, and I suspect this would be a fascinating read. Here’s hoping that an English translation will someday become available.

UPDATE: I found a page on the Behemoth web store (here) where the book (in Polish) can be pre-ordered. It includes this statement: Behemoth’s “THIS IS A POLISH VERSION OF THE BOOK! ENGLISH ONE – ESTIMATED DATE 2013”. That page contains additional info about the book, and after the jump I’ve included a bit more about it after converting the text into English through Google Translate

The trailer is after the jump, too.

Here’s a bit more about the book, which is a Google Translate conversion from the Polish that I’ve edited to make it a bit more readable (hopefully without changing the meaning):

“An interview with one of the most prominent Polish musicians and one of the most controversial and inspiring at the same time. Behemoth’s leader reveals all the cards, honestly and without compromise talking about his childhood, adolescence, and his early musical loves and fascinations. He recalls the beginnings of both Behemoth and his stormy romances, and more serious relationships.

Readers can also spend a lot of time on Darski’s views on issues related to music, religion, church history, the place of man in society, and the family. There are also reflections on his successful fight against leukemia.

Emerging from the interview is a portrait of a man who is not only scandalous and a demon on stage, but above all a man of wide interests, extremely well-read, and both forceful and erudite in expressing his views. A man who is independent and above all freedom-loving.”