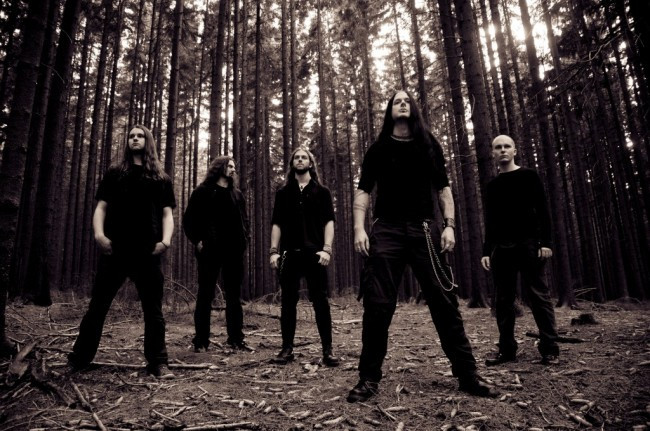 (In this latest edition of the Synn Report, Andy Synn reviews the discography of German black metal band Agrypnie.)

Germany is currently producing some of my favourite, black metal based music. From the cosmic-infused technicality of Dark Fortress, to the shadowy arcana of Secrets Of The Moon, not to mention the snarling, infernal fire of less well-known acts like Infestus and Odem Arcarum.

To that list we can add Agrypnie, a band I only discovered when they were announced for Summer Breeze, but who I instantly fell head over heels in love with. With 3 albums and one EP to their name, and a fourth album prepped for release soon, the group have helped fill the void left in my life by the (forthcoming) dissolution of Abigail Williams. I needed something with that introverted rage and extroverted passion, a band who wrote long songs because they wanted to explore the limits of their sound and vision, and that’s exactly what Agrypnie offer.

Currently a five-piece (at least live, as their Facebook page lists a litany of contributing members) after their initial inception as a one-man project, the band occupy a unique place, balanced on the pinnacle of ferocious, yet melancholic black metal, machine-like death metal force, and majestic post-metal dynamics. Grand touches of Alcest-ian melody and Agalloch-ian majesty vie with hints of Insomnium’s focussed power and Dark Tranquillity’s harnessed aggression, all melded together to produce a sound that blurs the boundaries between melodic black metal and melodic death metal, with a progressive verve that manages to recall both Enslaved and even Anathema at their most expressive.
F51.4 – 2006 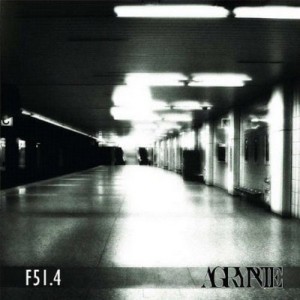 After the bleak crescendo of the instrumental “Intro”, the album kicks in with “Und führet Mich Nicht in Versuchung”, blasting out of the gate with a thrashy, aggressive assault on the senses. The transition into crunchy, stomping riffage is underpinned by an understated bass presence, while the staccato rhythmic shifts of the track are offset by flowing patterns of lead guitar and the forlorn growls of vocalist Torsten Hirsch.

“Auf Den Nackten Korridoren” crafts a depressive, Anathemic atmosphere, before erupting in a scalding torrent of abusive, abrasive black metal. The dichotomy between these two sides is what drives the song, from its crawling, hammering mid-section, to its blazingly melodic, yet often exceptionally aggressive, closing bars.

“Cogito Ergo Sum” maintains a careful balance between light and dark, Torsten’s wounded vocals bristling with pain and rage while the chiming guitars trill out a sombre coda of post-black metal melancholy. The devastating syncopation between the drums and guitars transforms the song into a rumbling, adamantine powerhouse, around which phantom keyboard lines and shadowy guitar leads dance a suicidal waltz.

The initial slow-burning melody of “Kerkerseelenwanderung” builds the anticipation until the pounding riffs interject themselves with hypnotic effect, transitioning into a wild and furious tremolo attack. It’s several minutes before the vocals are introduced, signifying the transition of the track toward a more open and emotive approach, layering in soothing melodic lead parts and softly tolling keys amongst the powerful, Insomnium-esque riff work.

Unleashing a barrage of wrathful vocals and spiteful, searing guitars, “Spiegel?” races out of the blocks in a savage blackened death metal assault, while undercurrents of melody spill out over the tightly composed confines of the track.

“Masken” is built on a foundation of brittle tremolo melodies and focussed aggression, with a particularly nuanced and effective drum performance (all the more so considering these drums were programmed) that builds to the song’s funeral-march mid-section, coupled with a series of echoing guitar leads and a wounded piece of bereaved, acoustic ambience.

Final track-proper “Glas” takes a different approach, beginning as a slow, almost sludgy series of groaning guitar parts and Spartan drums, transforming slowly into a stream of writhing, serpentine tremolo runs which build toward critical mass in an explosion of crippling emotional agony. 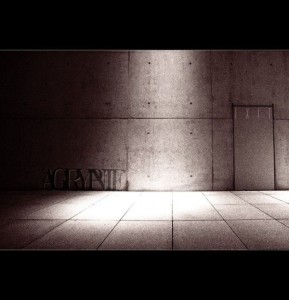 “Mauern” begins with a soothing, acoustic intro that recalls Agalloch’s brand of archaic melancholia, but soon erupts into a torrent of scathing tremolo runs, backed by some crunching, mechanised riffage that has a hint of Gojira to its biomechanical rhythms. This thunderous sound is bolstered by Rene Schott’s fantastic drumming, conducting the frantic riffs and progressive convulsions of the track in a fluid balance of the artistic and the animalistic.

The weeping melodies of “Die last Der Erinnerung” have a melancholic frailty that brings to mind Alcest, but are balanced by a pure, focussed rage. The stuttering, guitars and precision drumming provide a perfect medium for the song’s anguished howls, while the more reflective moments create an air of soporific calm. Injections of electrifying melodeath riffage give the song a vibrant, restless aura, even as soothing waves of keyboards and sweet guitar melodies grant it an air of heartbroken sadness.

The ghostly opening of “Zivilisation” channels Wolves In The Throne Room, yet is more destructive and less self-indulgent. The temporary peace is soon shattered by the cataclysmic eruption of a storm of crackling, contradictory riffs, melding ethereal touches of half-melody with chugging power and sudden flashes of searing speed.

Instrumental track “0545” channels touches of Tool and Katatonia, providing a perfect lead in for “Fenster Zum Hof”, an 11+ minute monster which serves as the album’s centrepiece. The furious pace of the track sets out a challenging, complex path, permeated by layers of restrained melody and ominous riffage. Lengthy ambient interludes contribute to the track’s light and shade, serving as the eye of the storm amidst a whirlwind of twilight grandeur.

The sheer aggression of “Wahrend Du Schlafst”, all crushing death metal riffage and visceral blasting ferocity, and “Schwarz”, a furious procession of monolithic chords and dark, harmonic melodies, both incorporate captivating interludes of desolate post-metal ambience to provide respite from the dense, blackened brutality, weaving a melancholy shroud about each track, before being torn to shreds by a barrage of hyper-mechanised, crushing riffage.

“Exit” ends the album with an isolated grandeur, a flowing procession of acoustic guitars which building into a series of breaking, tidal chords, accented by gleaming, sorrowful Alcest-ian guitar melodies, and ending with a rain of forceful interplay between the gleaming guitars and the crashing drums. 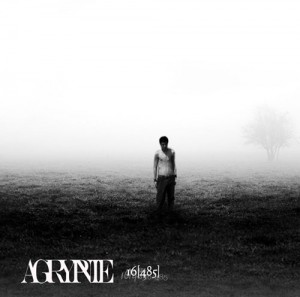 The almost orchestral electronic build-up of “Figur 109-3” primes the anticipation for the storming “Der Tote Trakt”, which delivers hammering snare beats, overpowering chords and a staccato rhythmic attack, wrapped up in a morphine cloud of narcotic melody. Effortlessly powerful, yet impressively atmospheric, it showcases the band at their most metallic and visceral.

“Verfall” is part brute-force aggression, part breaking emotional weight, crushing the listener with its despair-filled as it hammers away at them with its grievous guitars and explosive drumming. It’s also possessed of an undeniable streak of glorious harmony that manifests in a recurring, Insomnium-esque tremolo refrain, backed by an unflinching backbone of rolling kick drums, the unceasingly stunning drums providing the track with a furious barrage of stunning sticksmanship and fleet footwork.

“Schlaf” starts out slow and expressive, before developing into a bestial roar of rage and passion. Scorching tremolo runs are used to build atmosphere and anxiety, while the track also benefits from some sublime interplay between depressive lead guitars and soulful keyboard arrangements. It also possesses a killer central riff refrain which encapsulates all the best aspects of melodic death metal and offsets them with the cleverest and most nuanced black metal drumming you’ve ever heard.

With its bestial, wounded vocals and irrepressible, hammering drums “Zorn” is a more aggressive number, but which also possesses the the off-beat melodic leads of early Dark Tranquillity. Throughout this, oceanic swells of raging blasting and rumbling groove carry fragile undercurrents of flowing melody, providing contrast with the leviathan riffs and disconsolate, growling vocals.

“F15.2” possesses the sense-numbing heaviness of Amon Amarth at full-gallop, married to electrifying tremolo parts and flashes of sublime acoustic guitar. At over 9 minutes it’s one of the longest songs on the disc, but justifies its extensive run time with a fluid array of vibrant, virile riffs and a drawn-out, brilliantly moody mid-section of singing guitar leads and rippling acoustic guitars. 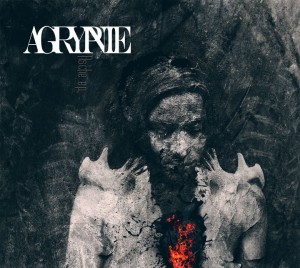 The Asche EP begins with the dark, perilous riffs of “Gnosis”, band stepping up their shadowy intensity even further, moving from rapacious blasting to a bestial, Cult Of Luna grind of grim beauty. Sonically the track is huge, its majestic, melodic guitars delivered with stupendous power, as Tortsten’s vehement vocals rage apoplectically around them. The second half sees the song transform into a procession of ghostly ambience and chiming guitars, reaching towards its climax of entwined, soaring leads.

Behind the fiery riffs and booming drums of “Erwachen” is a prowling melody that flits and flutters in and out of view, seducing and enticing the ear. The rising and falling composition washes over the listener in waves of power, balanced by the extensive atmospheric interlude which speaks in stillness and silence, matching Torsten’s anguished vocal lament with a fragile,  poetic ambience.

“1.10#06+0.35” is a depressive instrumental of radiant piano, sputtering electronica and pulsating drum samples that serves as a breather before the intricate layering of “Augenblick”. Patient and progressive, the track slowly bleeds together, its exquisite acoustic parts eventually transforming into a pummelling, chugging pattern of devastating rhythm guitar, providing the basis for a series of swirling, slashing tremolo parts, painting wild stabs of colour onto the song’s unbreakable steel canvas. The track teases an ending as it shifts into a quiet, solemn aspect, before it blossoms once more into a forceful stream of ringing chords and enveloping keyboard parts.

The final track on the EP is “Kosmos [Omega]”, an arrangement of gloomy sci-fi keyboards and haunting, post-metal ambience which ends the CD on a sombre, depressive tone.