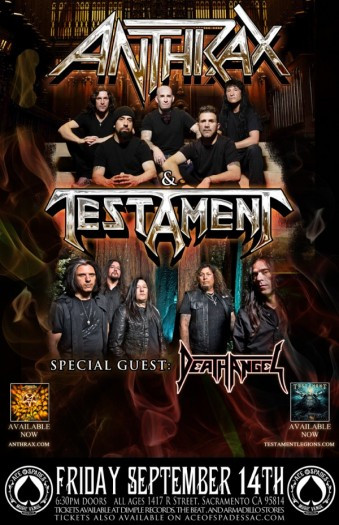 (In this post DGR reviews the Sept. 14, 2012, performance in Sacramento, CA, by Death Angel, Testament, and Anthrax.)

This is probably one of the easiest show reviews I’ll ever have to write because the three bands you see on the tour flyer are literally it. No local opener, no smaller band, just three standard-bearers of the thrash scene putting together one of the better tours that have hit recently. I always joke that if you really want to find me at a show then you need to look for the guy with the long hair and the goatee.  This time, however, I probably was easy as hell to find based on that description, and I should’ve told everyone to look out for the balding guy.

I was really excited for this show for a couple of reasons. I’d get to see Testament again for the second time this year. I feel they’re one of the best ‘legacy’ bands out there right now, and the quality of their recent discs is just as good as the older stuff that they’re known for. Another reason was that this would be the first show I’ve attended at Ace Of Spades that was sold out. I’ve been to some pretty big shows there and seen the room filled with people, but never packed to the gills as it was that Friday.

Finally, I knew the place was going to lose its collective mind for these three bands. When Testament rolled through here previously, the venue went completely nuts. If there’s one thing I could rely on, it was that Sacramento’s fans were going to go nuts and I would be there to bear witness to it.

I was lucky enough to find a really great view in the upper bar about fifteen feet from the stage, but perfectly level with the performers on stage, so I grabbed that spot as quickly as I could and just rested on that railing. If you’re not one of those people who is obsessed with being up front on the floor or in the pit, my location was seriously one of the best spots in that whole venue. Not long after I got inside, Death Angel took the stage and the night began. 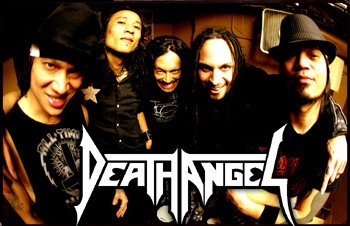 Death Angel actually took the stage about five minutes early, which was a little surprising. The show had a start time listed as seven, and they were on by 6:55. I only mention this because the line to get in was so huge and so slow-moving that even though the guys had a seven-song setlist, by song five there were still people filing in. They’re a good band who wear the thrash flag proudly and they have some very dedicated fans. I have no idea what the guy in the front row’s cardboard sign said, but guys, there was somebody holding up a cardboard sign like this was a wrestling event for the whole show.

Death Angel didn’t have much room to move around on stage but they made use of the pretty limited real estate they did have. They kept to the faster songs in their catalog, which helped open up the floor real early. It wasn’t too long before we had a pretty big floor-wide pit that was holding people back from even getting close enough to see the stage. Also, all three of the bands have those portable microphones that come with half a stand. Death Angel’s front man wielded that motherfucker like it was a weapon. Between him flipping that thing around a bit and his long-as-hell hair, he was something to watch in his own right. They did well here in Sacramento and the crowd loved them.

After Death Angel played, Rob from ThatDevilMusic found me and we were able to shoot the shit for a bit. It’s nice to see him at shows because despite the fact that California has 38 Million people within its state lines, apparently NO ONE HERE LIKES HEAVY METAL AND TALKING ABOUT IT ON THE INTERNET. Seriously, for all the talk about how metal has an amazing sense of community, why the fuck does it seem like all you assholes are either in Canada, Great Britain, or the goddamn East Coast. 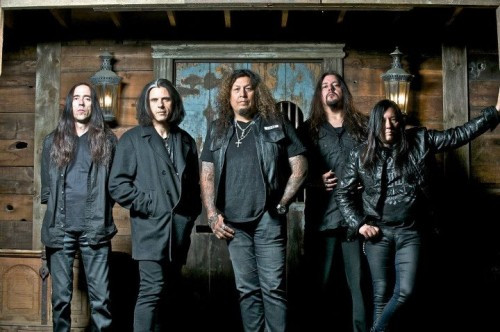 Sacramento is such a Testament town that it isn’t even funny. It seemed like everybody in the venue was there for them the moment that they took the stage. Hell, I even had three little girls that, I shit you not, knew the words to almost every song they played, standing in front of me and blocking my view for part of the set. Seriously, I was the only guy in the venue who, despite my perfect view, had his sight blocked by a bunch of nine-year olds who decided to stand on the backs of the chairs in the row in front of him.

Since Testament were the middle guys in the show, they changed up their set quite a bit from when I saw them before. They played about twelve songs (maybe thirteen, I wasn’t trying to count too hard between my rocking out) and four of them were from the new disc, because goddamnit they have a new disc to hustle. The newer songs they broke out were the title song, “Dark Roots Of The Earth”, “True American Hate”, “Rise Up”, and the music video song “Native Blood”. The other eight or so songs were varied as all hell.

“Three Days Of Darkness” is never not awkward, but I think part of it might be that we’re too stupid to understand that we’re supposed to be shouting “three” at the end of the song. Instead, we’re always just sticking the horns up and screaming. Every other song though, man, did the crowd lock in with this band. It was nuts to see, and even during the newer songs everyone was singing along. The only time they didn’t was during “Into The Pit”, which made Ace Of Spades explode.

I’ve witnessed this before, because being the idiot that I am, I ran into said pit the last time I saw them. I had a fucking watch broken during that escapade. This time, however, I watched it from my higher view. and man did that look absolutely insane. I’m a pretty shameless fan of Testament and their later material, so of course I thought this chunk of the show was going to be great. That said, these guys are the consummate showmen, so if you haven’t gotten the chance to see them you need to get your ass out there and do so. 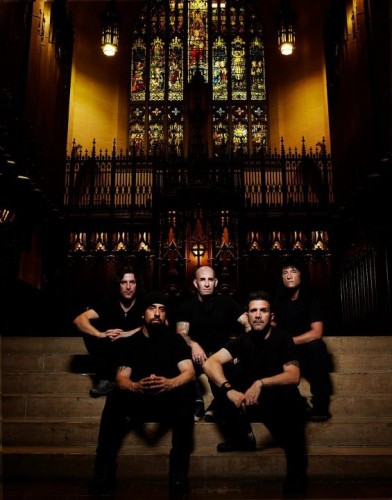 Let me start by saying that out of the bands who played that night, Anthrax is probably the one that I listen to the least. There’s always that one band you can never really get into, no matter how many people sing their praises, and Anthrax happen to be that band for me. They were basically a cherry on top of a really good Testament show, as far as I was concerned. I figured I’d recognize about half their setlist outside of the newer stuff, because they pop up so much in pop culture anyway that in addition to the songs that I actually do know, there would be stuff from various videogames and movies.

They definitely played a varied set, I can give them that for sure. They picked songs from a wide discography and were even willing to have some fun with their music, such as breaking out a “Run To The Hills” drum intro during the song “Indians”. When they played “Caught In A Mosh”, of course, the floor exploded in one of the widest pits I saw that night. That was pretty cool.

I haven’t heard Worship Music, but the newer stuff that they played sounds more mid-tempo than the earlier music, so I was almost able to pick out those songs for that reason alone. They broke out “DeathRider”, which is so goddamn heavy that it almost feels like it wasn’t written by Anthrax, especially considering that the rest of their songs bounce between an almost punk aesthetic and a desire to be more progressive than they are.

They play a really lively set, and outside of the one guy who always wears a beanie, everyone behaved pretty much like how I’d always seen them on TV. Joey is impossible to understand sometimes. I know in one song he tried to talk but was speaking so fast that every word that came through the PA sounded like he was talking another language, leading to pretty much everyone in the venue going, “What?” to the closest person.

Another thing that I thought was odd in an otherwise entertaining set was the closer, “I Am The Law”. It’s a good song but it just seemed like such an odd choice for the finish to the set, especially when they played one of their biggest hits the song before. Granted, it was one more song for the fans to hear, which is an excellent gesture, but it was a strange stop to the momentum that Anthrax had been building the whole set.

After the show, I shot the shit with Rob and some of the guys he had up from the Central Valley. Watching the venue empty out was really cool since I actually got outside pretty quickly. Despite the line-up being only three bands deep, we still got out pretty late in the evening, much to the bemusement of the frat boy bullshit happening in the bar next door. We actually had some dude shout out “SLAAAAAYEEEER”, like it was funny.

After BSing some more and updating our AARP membership cards, we all split off and I was able to crash out early enough in the wee hours of Saturday morning that I didn’t even feel the ungodly impending bangover that was headed my way.