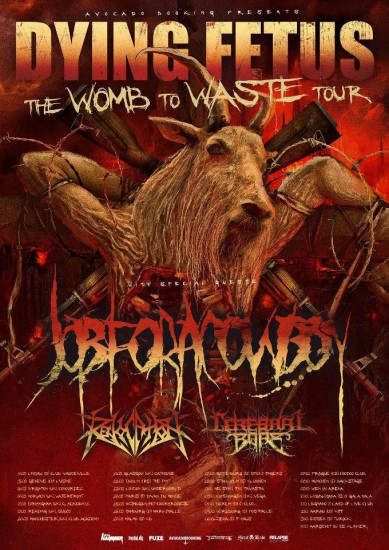 (Andy Synn journeyed to Birmingham, UK, to take in The Womb To Waste Tour and wrote this review of the experience. Andy has also provided us with video of each band’s performance.)

So here’s the thing. Myself and my good buddy Tim (also of Bloodguard fame) decided, kind of at the last minute, to head to this show over in Birmingham (those who pussied out know who they are, but I won’t shame them by naming them…). Now Birmingham isn’t all that far from where we live, except in rush-hour, which pretty much doubles your travelling time. I’m telling you this to explain why we missed Cerebral Bore, who I know have a fair few fans on this site. As it stands, we got there just as they were starting their last song, so I took the chance to hit the empty bar and check out the merch stand, before finding a good spot to watch Revocation.

Revocation being the only band I hadn’t had the pleasure of seeing live before, I wasn’t sure what to expect, particularly as the band’s insane fusion of day-glo techno thrash, proggy song-structures, and black/death hybrid heaviness is the sort of foolhardy mixing and matching that often leaves me cold in the live arena. Thank god then for the band’s boundless confidence and enthusiasm, which certainly helped each song come across as more than just a series of good ideas thrown together, every track delivering an array of heavy, head-banging riffs, wild, madcap drumming, and sizzling solo work, while jumping around all over the metal map.

Okay, at times it was a little disjointed, not every song, or every part, made for a flowing set, but this was more than offset by the sheer number of killer riffs and badass solos packed into each track. Barring some early miscommunication, where the band’s tongue-in-cheek ‘belligerent American’ schtick rubbed a few people the wrong way, the between-song banter and general stage presence of the group definitely won over a good proportion of the crowd, with the triple-headed finale of ‘Dismantle The Dictator’, ‘Conjuring The Cataclysm’ (with hilariously uber-metal introduction), and a ripping ‘No Funeral’ finalising a winning performance by these relative underdogs.

Job For A Cowboy are, slowly but surely, taking the necessary steps to be considered a legitimate death metal band, after what many consider their inauspicious, or inauthentic, early years. Though to my mind the band have been ‘legit’ for a long while now (at least since Ruination, if not before) it’s good to see this growth being reflected in their fan-base, now clearly divided between the dwindling number of deathcore fans (neck tattoos, distended earlobes, starched, ill-fitting caps) – who only really respond to the Doom’material – and the death metal fans (also neck tattoos, but generally of a huskier build and lacking the trendy body modifications) – who kick off most for the material from Ruination and beyond.

Even with the increasing difficulty and complexity of the material, the performances were rock solid, deathly tight, and scorchingly vicious, though the band (apart from frontman Jonny Davy) seemed to take a few songs to relax. While bassist Nick Schendzielos eventually loosened up to become the grinning ball of energy we’ve seen before, man-mountain lead-guitarist Tony Sannicandro remained a somewhat stoic and immovable presence throughout. They also suffered from the worst mix of the night; Al Glassman’s guitar, while audible, was placed way too low in the mix to have any real impact, while the snare drum came in and out of focus at seemingly random occasions.

I also seem to remember the group ran through a nice doomy rendition of ‘Tarnished Gluttony’ as well, although I can’t seem to find any online evidence of that fact anywhere else. Let me know if I dreamed that, ok?

I’ll admit my love for Dying Fetus has waxed and waned over the years, and sometimes I feel like I don’t give them their due. However, after this show they jumped up yet another notch in my estimation. With a gruesomely tight performance – free enough to be human, yet almost mechanically infallible throughout – the three-piece unleashed absolute holy hell, sounding like a band with ten times as many members, delivering barrage after barrage of crushing sonic artillery, inspiring utter chaos in the pit.

Both John Gallagher and John Beasley have fearsome voices, sharing the lyrical venom in pretty much equal measure, and both can also shred a mean fretboard. Beasley’s bass was twisted and abused in a way the instrument was never designed for, while Gallagher’s guitar was tortured into emitting some truly demonic technical delights. On top of these two horrors you have the almost inhuman drumming of Trey Williams, who performed most of the evening’s tech-death masterclass with a shit-eating grin plastered all over his face.

The Dying Fetus secret weapon though, apart from all the brain-busting slam rhythms and face-melting tech-spasms, has been their employment of murderous groove, breaking out huge, bone-breaking riffs that are hooky as hell and twice as brutal right at the point when the audience seemed ready to drop from exhaustion. The uninitiated may think it’s all just noise, but it takes real skill to maintain a sense of dynamic when your only speeds are ‘kill’ and ‘destroy’.

A wealth of material from Reign Supreme dominated the set-list, but the band touched on pretty much every album, cherry-picking from their enviable back-catalogue of mind-bending musical atrocities. Personal favourites from the night have to be the ripping version of “Schematics” blasted out early on, and the always deadly ‘Homicidal Retribution’, which preceded a nasty, brutish encore to send the packed crowd home happy and half-deaf.

All in all a suitably brutal night of raging, clinically efficient death metal and superfluous instrumental skill that left me – and I’m sure more than a few others –  utterly exhausted, mentally and physically. Go check out this line-up if you haven’t already! The remaining tour dates can be found here.