“The more things change, the more they stay the same“ is usually used in a negative context. Not here. The consummate ease with which Anaal Nathrakh vomit up quality album after quality album, all without straying too far from their core sound, makes that statement one of unshakeable intent, reaffirming the band’s commitment to sheer sonic superiority.

It takes a masterful band to truly embrace their sound and continue to push it for all it is worth, without falling into a comfortable rut or succumbing to the lure of the ‘new’, but Anaal Nathrakh have always been anything but comfortable. Masters of the lethal musical arts, with each album their unholy fusion of blackened fury, grinding filth, and industrial-strength death metal power is re-tooled and reworked to further plumb the depths of humanity.

With Vanitas Anaal Nathrakh have produced their most melodic, yet also most blackened, record in years, with a heavier focus on intense, virulent remolo melodies and bleak, haunting moodscapes. Closest in character to Eschaton, the main touchstone for the music is the work and sound of Emperor; the soaring, almost arrogant, clean vocals recalling Ihsahn at his finest, while their juxtaposition against flaming torrents of scalding riffage and twisted, contorted song structures echoes a similar ability to effortlessly strike multiple targets at once – the melodic, the blistering, and the crushingly heavy – without weakness or hesitation. 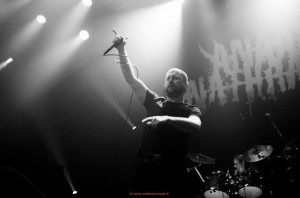 Though furious blackened melody may dominate, the album is certainly not without its surprises. There is a nascent doom element behind tracks such as “The Blood-Dimmed Tide“ and “Todos Somos Humanos”; groaning, monolithic chords hang menacingly over each song, adding a tar-thick gloom to the proceedings. The former bursts at the seams with lashings of electrified tremolo guitar, but also has a pronounced and terrifying undercurrent of doom-laden malevolence and skin-crawling, symphonic darkness. The latter coats its monstrous, leviathan chords with sweeping electronic embellishments and rumbling kick-drum artillery, while the vocals provide a terrible cacophony of grinding madness, screaming tormented refrains and thundering death metal pronouncements of doom.

The sheer blackened hate of “Forging Towards The Sunset” and “Of Fire and Fucking Pigs” showcase the record’s more intimate focus on slicing, scalpel-bladed tremolo guitars, whose concentrated lethality and viral melodies cut deep into the bone. For both tracks scarred and scabrous tremolo work is the name of the game, accented by piston-driven, mechanised rhythms, and ferocious, unstoppable blasting. However, the two tracks also showcase very different sides of the band’s personality.

The latter is an all-out malignant tumour of cancerous vocals, stuttering industrial-sized guitar riffs, and scalding hails of tremolo-driven melody which maintains an unforgivingly brutal pace throughout. The former, however, has a slightly more… dare I say… progressive slant, most apparent during its stunning, imperious chorus refrain, the group spreading their wings into more expansive, progressive territory. Yet for all its huge focus on melody, it never hesitates to brutalise the listener –the closing scream alone is harsh enough to abort children in the womb.

“To Spite The Face” has the sort of frenetic arrangement that the band perfected on “Hell Is Empty…”, its scorching black metal guitar work punctuated by pulsing, mechanised rhythms. While subtle clean vocals add colour and context to the song, they are not the primary focus, as it is the spiteful, throat-scraping chorus which truly draws the eye and ear, matching its devastating intensity with a piercing melodic lead line. Indeed, it’s the guitar melodies that really carry this song, from its jerky introductory bars, through its stratospheric chorus, up to its frantic finale.

While the record largely eschews the grind-based insanity that plagued Passion, its visceral ugliness has not been totally forgotten, rearing its head on several tracks, such as the aforementioned “Todos Somos Humanos” and the pulverising “In Coelo Quies, Tout Finis Ici Bas”. On the latter the scratching, tearing grind vocals work in perfect tandem with the grandiose cleans, providing a pitch-perfect contrast between ugliness and beauty. The guitars meanwhile transform smoothly from explosive, percussive blasts of chugging force into coiled loops of sinuous tremolo melody. Most surprisingly the track ends with a fluid, melodic solo that provides a bruised and bleeding coda to the track’s unforgiving assault on the senses.

One of the most unusual tracks on the disc, yet still carefully and precisely placed in the overall flow, the cybernetic death metal of “You Can’t Save Me, So Stop Fucking Trying“ welds booming, explosive death-grind to a fluttering, heart-stopping melodic pulse, topped off with a furious death-punk chorus quite unlike anything else on the album. Added to this, the aggressive, scattergun electronica gives the track a narcotic, synthetic vibe, making its mix of dynamite death riffage, stomping industrialisms, and murderous chord sequences a perverse pleasure. 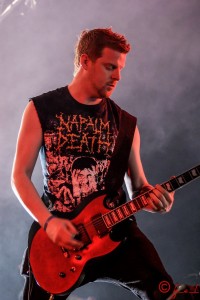 “Make Glorious The Embrace of Saturn” is a short, sharp shock to the system, a furious downpour of torrential black fire, twisted into staccato, obliterating form, then pushed into the red by its sheer face-melting intensity. The stop-start pounding and crippling, groaning chords add a fatally precise dynamic to the track, making the moments of unadulterated blasting terror all the heavier. Short, but ever so sweet.

By contrast “Feeding The Beast” draws in a host of doomy influences, maintaining an almost funereal pace for the majority of its run-time, only occasionally breaking out into stuttering spasms of blasting snare and rolling kick-drum thunder. Its central fractured melody is a skin-crawling expression of malice, which mutates from its tenuous, crippled delivery into a screeching, atonal banshee wail. It truly takes its time to breathe its evil aura, allowing the choking miasma of doomy chords and phantom melodies to build a thick and suffocating atmosphere of enigmatic horror.

Perhaps most interesting of all, final track “A Metaphor For The Dead“ initially creates a phantasmic atmosphere of melodic guitar notes and oiled bass lines, which is soon crushed into dust by a hammering death-metal breakdown, replete with sparks of twisted hardcore dissonance. This then is played off against the stunning, colossal clean chorus that follows, a promethean performance of a much more measured and contemplative style than you might expect.

The unusual arrangement and orientation of these elements would be abrupt and awkward in the hands of a lesser band, but it demonstrates quite effectively that Anaal Nathrakh are masters of all aspects of their craft, able to twist and combine them as they see fit. The symphonic, yet understated leanings of the album’s first track come full circle here, providing an undercurrent of stalking darkness, while the finale sees the band give full voice to their most epic inclinations, building into monumental refrains of grandiose, ambitious lead melody.

I’ve tried to keep the hyperbole to a minimum, but honestly this is a near perfect record, and a flawless distillation of the beauty and horror that defines the band. A more complete record than its predecessor, it’s more tightly stitched together than Passion‘s fragmentary, occasionally strained construction. It seems to me the band have only grown in stature over the intervening years, Vanitas learning from its predecessor’s successes and failures, pushing the sound ever further without weakening its foundations, striving ever closer to  perfection.

Fittingly, the band have used and abused elements of beauty, melody, and structure to construct something very nasty and, at times, distinctly ugly. Such is the point of the record, and it is a point well made. The revitalised clarity of purpose displayed on Vanitas – most clearly demonstrated in its renewed focus on pronounced, black metal malice – serves to tie even the album’s more unexpected and experimental moments together into one hideous package, and acts as the ideal vehicle for the group’s message of bleak, internal horror.

EDITOR’S NOTE: Vanitas will be released by Candlelight Records on October 15. It can be pre-ordered here. Anaal Nathrakh’s Facebook page is at this location.

“Of Fire and Fucking Pigs” has been released as a single on the UK version of iTunes — and UK residents can go here to get it. Below are that song and a teaser clip of other music from the album.