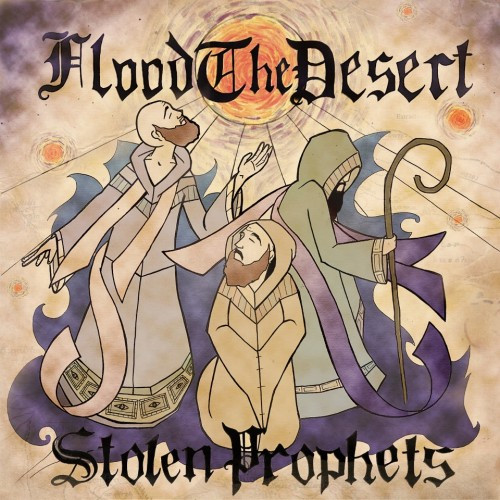 (Not long ago BadWolf reviewed a live show in Grand Rapids that included a band named Flood the Desert that made quite an impression. Now BadWolf reviews their debut release.)

When I last checked in with Flood the Desert, they were nearly done completing their first official release. Just a few months later I have the finished product sitting on my iPod. Stolen Prophets is the debut four-track EP by this Grand Rapids, Michigan power trio.

Stolen Prophets clocks in at just shy of a half hour, and runs a wide tonal gamut in that brief time. If you’re looking for music that can take you somewhere else when you close your eyes, Flood the Desert are that band. They keep things relatively low on extremity—no song here gets much heavier than any given track on Mastodon’s Crack the Skye—and opt instead for a cleaner sonic palate.

The trend I see in modern progressive metal is to splice genres together with reckless abandon, and Flood the Desert buck that trend. Owing in part to their history as an improvisational band, Flood transition from passage to passage while keeping to one distinct texture. Or think of it this way: Between the Buried and Me jerk around the track with manual transition, occasionally stalling their car; Flood the Desert use a slap stick and keep the ride smooth. Opener “Ace Is High,” begins delicate, accelerates into a syncopated mosh riff, and then dips back into introspection. This sort of lite-then-heavy and back juxtaposition has become pretty commonplace, but the twists are still exciting even if you can sort of predict them.

If Stolen Prophets has a weakness, it lies in the vocals. Bassist Zach Flora’s vocals were mixed high, and at times it sounds like he’s pushing himself too hard for a gruff sound. The vocals also sound quite dry—perhaps a little echo would fill them out in the mix. That’s very forgivable on a debut EP, especially a self-produced record that comes with instrumentals.

Flood the Desert rise above that limitation as well. The song “Pyramid in the Sky” revolves around a quite beautiful chorus wherein Flora and guitarist Duncan Lammas sing in tuneful harmony. I hope they use their voices together more in the future. That song more than any other hints at the possibilities in Flood the Desert’s future: its intro is reminiscent of Lateralus-era Tool’s drum and bass interplay but some of the riffs recall pre-Mindcrime Queensryche.

In a decade where Prog-metal has undergone a boom in relative popularity, Flood the Desert stand apart in the glut of would-be Mastodons by sounding professional, and never getting too wanky with their chops. I’m thankful for getting into this band on the ground floor and recommend that you do the same—I see a bright future for Flood the Desert if they stay in the game and focus on those things that make them unique.

7 Responses to “SHORT BUT SWEET: FLOOD THE DESERT — “STOLEN PROPHETS””