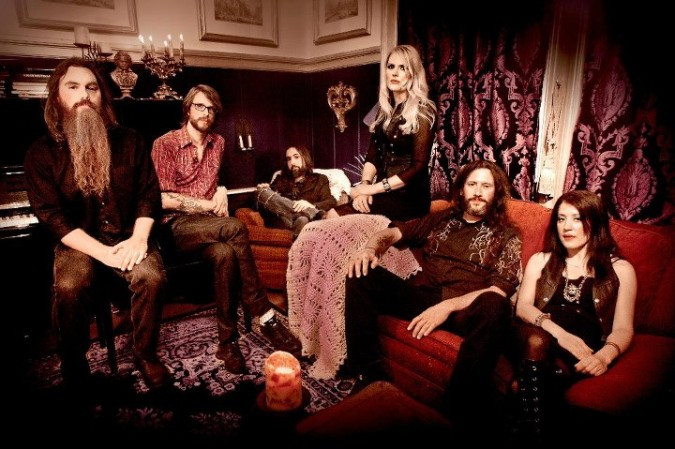 (BadWolf provides this review of the July 19, 2012, live performances by Hammers of Misfortune, The Gates of Slumber, and Flood the Desert in Grand Rapids, MI. All photos in this post, except the one above, were taken at the show by by Robert Shooks.)

In a summer stuffed to the gills with excellent tour packages, none coaxed more ropes of saliva from my lips than Hammers of Misfortune and The Gates of Slumber. The Gates may be Indiana’s finest sons in doom, but they’ve largely foregone midwestern tour dates. As for Hammers of Misfortune, what justification do you need? The band roared back to life last year after an extended hiatus (during which several Hammers members made some of the finest black metal I’ve ever heard in Ludicra) with a revamped lineup. To sweeten the pot, they toured behind last year’s 17th Street, their most focused album since 2003’s The August Engine. 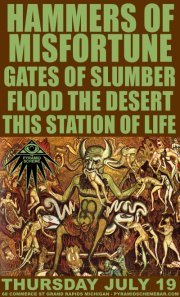 D00shc00gr and I made the trek across the state to the Pyramid Scheme in Grand Rapids—a fine venue tucked behind a cafe and pinball arcade, complete with a small but top-notch selection of Michigan microbrews on tap. I suffered through a complimentary glass of Bell’s Two-Hearted IPA ( I wished it was Oberon) but Short’s Soft Parade still tastes like sweet dreams! Venues such as the Pyramid Scheme are growing like weeds in Grand Rapids.

Having spent a sizable portion of my adult life in the erstwhile metal-free state of Michigan, I can say with some authority that Grand Rapids is the place to live at the moment. Lansing may have the finest local scene, But Grand Rapids draws many larger tours with its bounty of clean, up-and-coming venues, compared to the largely bitter remnants of Detroit Rock City.

No city on the rise is complete without its own rising stars, and Grand Rapids’ Flood the Desert are no exception. I’ve written about this prog-sludge trio favorably before. That night, armed with a new drummer, Flood the Desert exceeded my expectations again. If talent had mass, then these three boys could punch black holes in the fabric of space time just by warming up—they shred with the ferocity and technicality of musicians much older and more famous. Their sound spills from the classical hard-prog styling of bands like Rush into newer Mastodon and Baroness territory. In fact they play so well, and there is such an appetite for bands in their genre, that about halfway through their instrumental closer, “Excelsior,” I wondered why nobody has scooped Flood the Desert into a release contract… 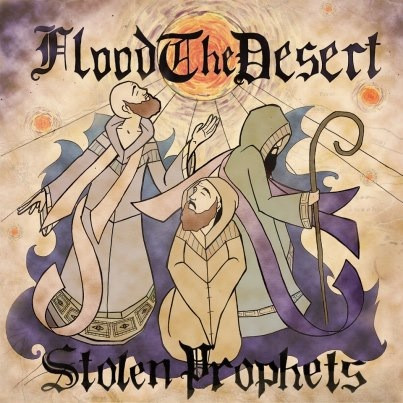 And then I realized that they have no professionally recorded music on the internet, so I have no way to show you firsthand just how excellent this band is. However, they have a debut record coming quickly down the pipe. It will be called Stolen Prophets, and we will have samples from it available here on NCS as soon as possible. I’d put money on the table that shortly after its release, Flood the Desert will be releasing music commercially. After that, if they can refine their ability to craft big, melodic hooks, such as the chorus of “Pyramid in the Sky,” then I would not be surprised to see Flood the Desert playing a large venue near you.

Then again, sometimes great bands play venues and crowds much smaller than their sound. Such is the case with The Gates of Slumber. After three consecutive albums of crushing—and critically acclaimed—doom, I expected a bigger draw. Oh well, more for me—I spent the entire set front row center. As a matter of fact, bassist Jason McCash walked in on me gargling with saltwater in the bathroom and coating one sink with hot, sticky mucus. 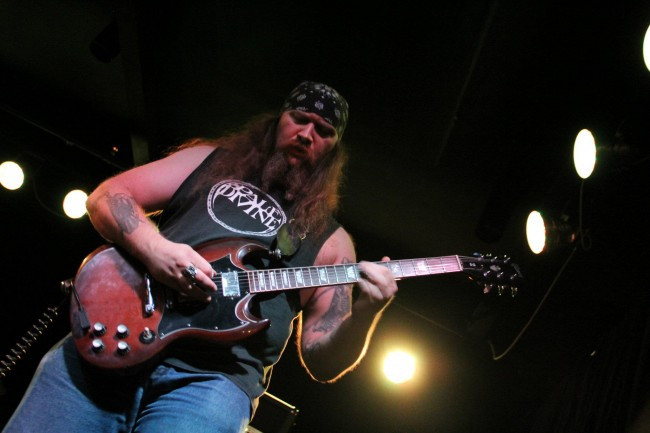 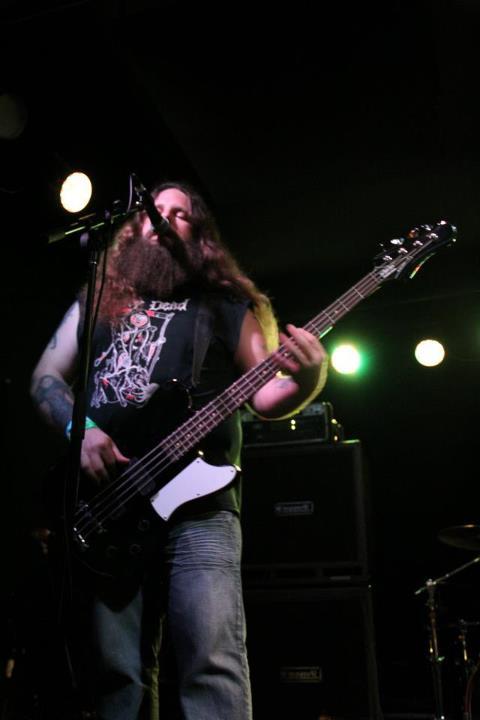 “Nice St Vitus tat.” I drooled. (Or was it Lord Vicar? The IPA hazes my memory.) Yes, The Gates of Slumber literally wear their love of Wino’s first and best project on their sleeve. However, having seen both bands live this year, I give Gates the edge. Their big-and-classic amp rig maintained their heavily distorted sound while keeping the individual tones and notes quite distinct. I have heard complaints about Karl Simon’s voice on record, and am happy to report that he’s tamed his chords after years of touring—I was taken aback to hear “Beneath the Eye of Mars” sung in-key and quite harmoniously after being accustomed to the album vocals.  They rolled through classics like “Ice Worm” and “Iron Hammer,” as well as choice cuts from The Wretch in a tight, well-ordered set.

Then came The Hammers. My anticipations were set unreasonably high—John Cobbett is one of my favorite contemporary guitarists, and The August Engine remains one of my favorite albums of the last decade. After their lineup revival, would they still sound the same? Would they play any old cuts at all? 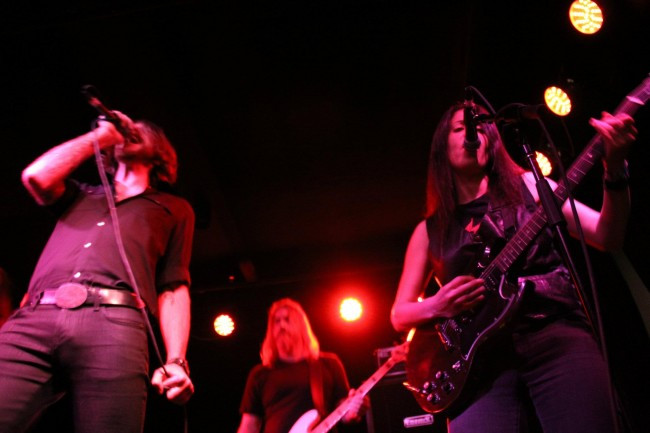 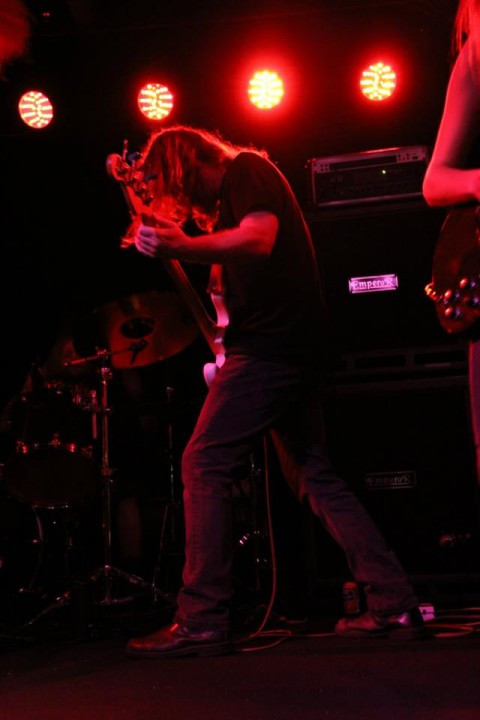 It is my pleasure to report that Hammers of Misfortune do indeed rip. Cobbett’s playing is tight, and so is the rest of his band. Their And Justice For All-plus-midrange sound is a joy to hear live—even at high volume without earplugs, the Hammers sounded clear. They rolled through a high-energy set that hit at least one track from every Hammers of Misfortune record and largely eschewed ballads, so I got my “A Room and a Riddle,” but no “Rain.”

Curiously, despite playing a great deal from 2011’s 17th Street, they did not play “The Day the City Died.” That track in particular received a great deal of blog attention, and for good reason: it’s an excellent anthem. It wasn’t missed, though. Every Hammers song comes complete with a huge chorus and at least one rock-solid riff.

As for Hammers of Misfortune’s new lead vocalist, Joe Hutton, I haven’t much to say, because he was completely buried in the mix. Shame to the sound guy. I do not know whether he can hit those wonderful notes he sings or not. I can say that he’s got all the makings of a great front-man but could show a bit more charisma. Pump a fist, dude, get in my face. You’re a fucking rock star, I want you to act like it! I’m not saying be Phil Anselmo, just make eye contact!

These are nitpicks, though. Like everyone else in the band, Hutton stayed on time and kept mobile. And hey, they closed with “You Should Have Slain Me.” All complaints fall before that simple fact. Here’s hoping the Hammers get on the road more often in the future. 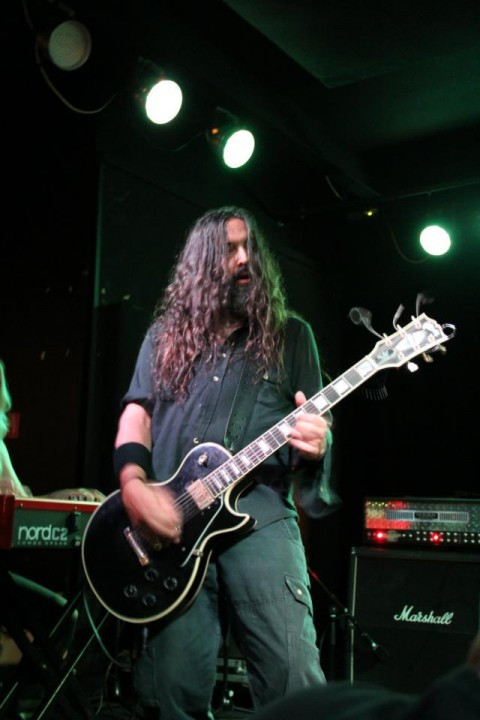 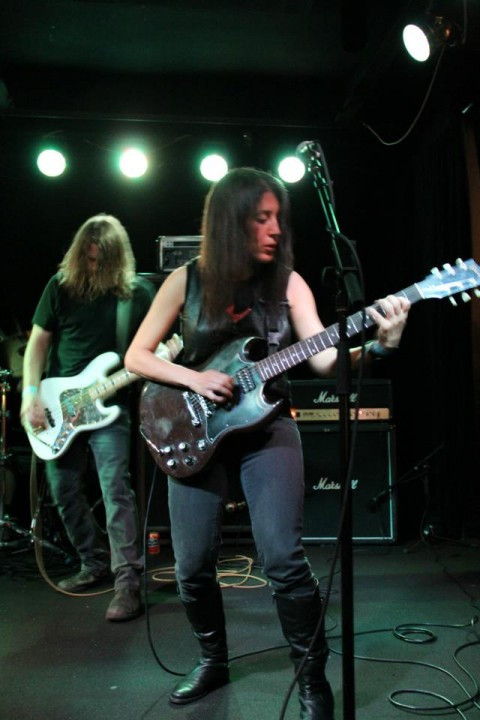 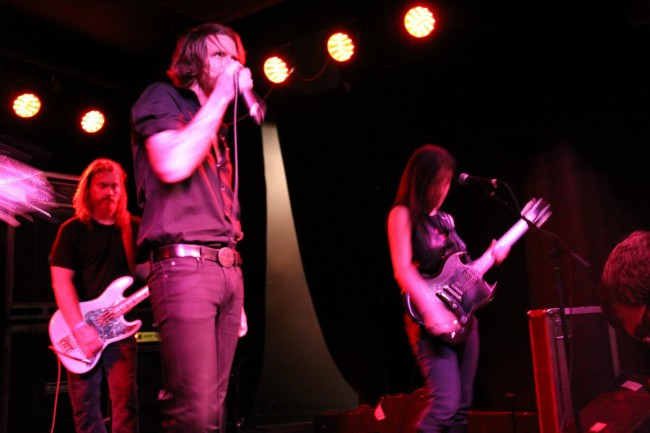 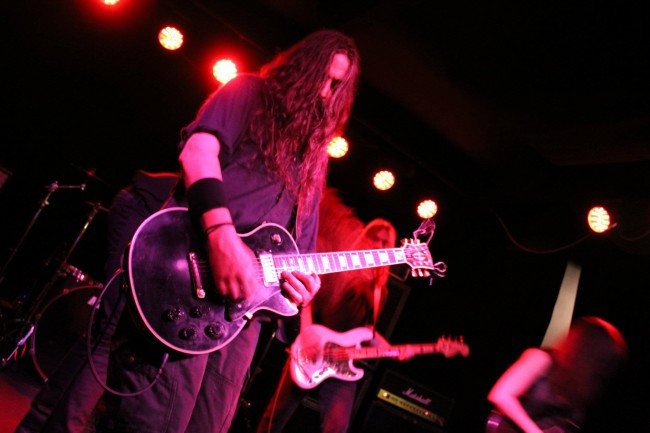 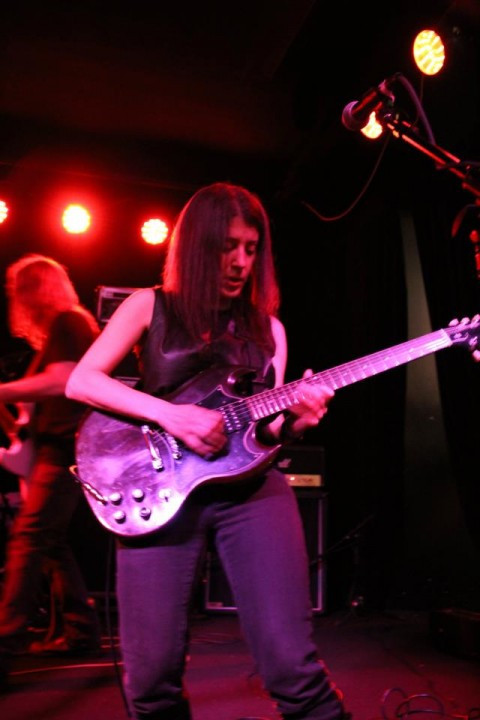 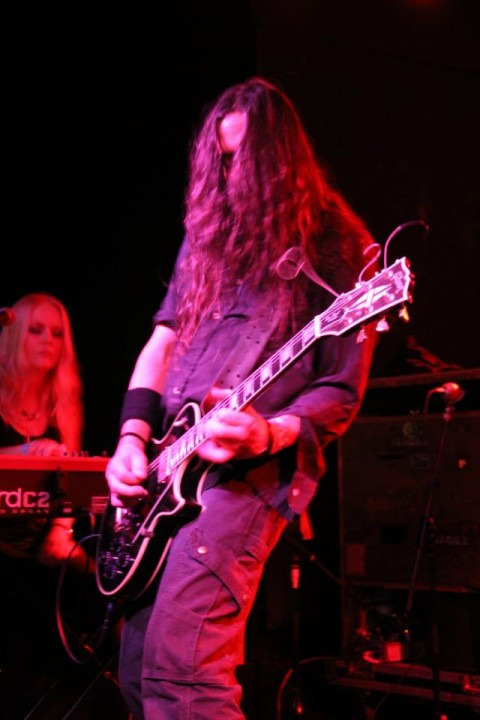 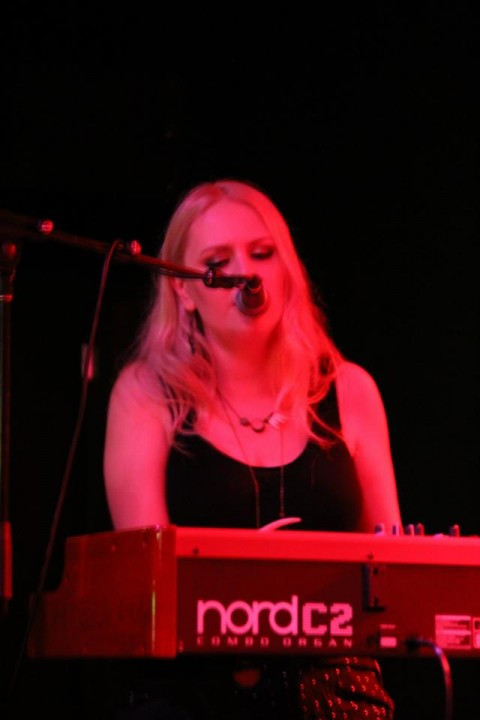 3 Responses to “HAMMERS OF MISFORTUNE, THE GATES OF SLUMBER, FLOOD THE DESERT @ The Pyramid Scheme, Grand Rapids 7/19/12”