Late yesterday I discovered that Converge had launched a full-album stream for All We Love We Leave Behind on YouTube. Originally, I intended only to include that piece of news in a post I was putting together with other new music streams that surfaced yesterday. But as I listened to the album and began attempting to describe briefly what I was hearing, the post began to take the shape of a review.

It’s not the kind of review I would normally write — I haven’t listened to the album multiple times, or made notes about what I was hearing, or sat back and attempted to collect my thoughts after putting some space between me and the music. Hell, I’m not even 100% sure that I’m matching up the songs with their correct titles, because there’s no index to the album stream that tells you for sure when one song stops and the next one starts — and given the dynamics within the songs and the nearly seamless flow from one to the next, it’s not always patently obvious (though the changing artwork is a signal).

But fuck it, I’m so caught up in what I’ve heard that I’m going with my near-stream-of-consciousness first impressions, and that’s that.

All We Love We Leave Behind will be released by Epitaph Records on October 9. In its “deluxe” limited-edition CD format, there are 17 songs (14 songs on the regular release), and that deluxe edition also includes a hardcover, clothbound book with 48 pages of full-color original art by vocalist Jacob Bannon. Honestly, I’ve been looking forward to this release almost as much for the artwork as for the music. In fact, I pre-ordered that expensive limited edition copy because of anticipation over the artwork, having heard nothing of the music. (You can see the variety of bundles and formats for the album at this location, where they can also be pre-ordered.)

But because of this full-album stream, the music is now available for all of us to hear in advance of the official release, and I unwittingly made a wise call in pre-ordering this baby. The stream not only includes the music, it also includes much of the individualized artwork that Jacob Bannon created for each song, and the art is amazing, as I suspected it would be. And the music? It’s equally amazing. 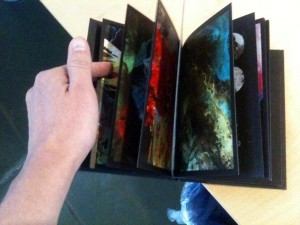 The songs turn out to be strikingly varied, from the chaotic, technically exuberant discordance of “Aimless Arrow” to the jet-fueled punk rampage of “Tresspasses” and “Sparrow’s Fall” to the mix of brutal sludge and swirling guitar leads in “Sadness Comes Home”, from the martial drum-and-bass hammering in “Empty On the Inside” to the jolting yet atmospheric “Glacial Pace” to the rifftastic stomp of “Veins and Veils”.

“Coral Blue” comes right out of left field as a mid-paced, hook-heavy, melodic crusher with a soulful guitar solo and a feedback fueled finish, and “Precipice” is as methodically brutal as anything I’ve heard from Converge.

As it starts, the title track almost comes as a relief. It’s low, slow, and massive, like a page out of a funeral doom playbook — until a powerful drum roll sends it off into a head-spinning swirl of guitar finger-tapping, bounding bass notes, and bone-breaking percussion. And only the dead could refrain from headbanging to the galvanic central riff in the closing track, “Predatory Glow”.

The music is unrelentingly heavy and almost as unrelentingly intense, with frequent moments of nearly uncontrolled violence and chaos as well as surprisingly memorable passages of emotionally charged melody. There are punchy riffs and hammering double-kicks, flights of freaked-out guitar pyrotechnics and rubbery bass crescendos, blast-furnace walls of noise and instrumentals that verge on post-metal. It’s an explosion of creativity that never seems calculated, pretentious, or anything less than completely honest and vital, as befits this band’s punk and hardcore roots.

At this point, it goes without saying, but I’ll say it anyway: All of the instrumental performances are exceptional, and Jacob Bannon’s vocals are as passionate and scraped-raw as ever.

Converge has accomplished so much already in their long career that I find myself doubly amazed at the brilliance of this album. When will they drift into repetition? When will they have a letdown? When will they mail it in, instead of creating something that’s yet another imaginative step ahead, creating an album that borrows from many parts of the band’s career without sounding like any one of the previous albums I’ve heard?

That kind of thing has happened before to other excellent bands, and one day something like that may happen to Converge, but not on All We Love We Leave Behind. On All We Love, Converge have nailed another absolute winner. More than eighteen years into their storied career, this may be their best work yet. Listen and look:

7 Responses to “CONVERGE: “ALL WE LOVE WE LEAVE BEHIND””