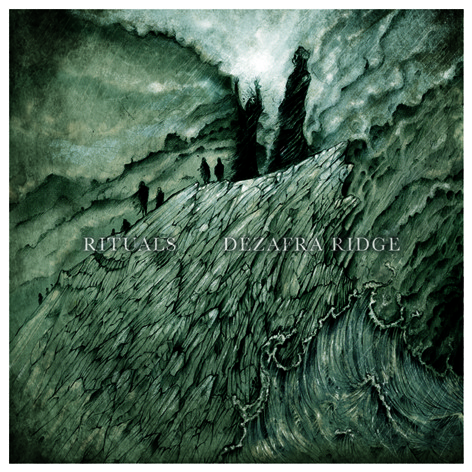 Past the halfway point, the intensity diminishes and a clean dual guitar harmony weaves seductive magic. The vocals build to a harrowing howl. The song seques into a slow, beautiful, hypnotic finish. The aura is one of bereavement and pain, but the melody is also glorious. There’s an almost post-black metal feel to this doom, and it strikes a strong emotional chord.

“Learned Helplessness” delivers a similar mix of ringing tremolo guitar atmospherics and caustic vocals, with a sludge-heavy bass line and booming, gun-shot percussion — and the plaintive sound of strings graces the final desolate minutes. Bleak, cold, and glacially paced, the music is both corrosive and ethereal, and that’s a winning combination from a talented band worth watching closely.

The two offerings from DeZafra Ridge are also lengthy, with “Simurgh” exceeding 9 minutes and “Psychomachia” weighing in at more than 13.

The music provides an immediate contrast with the music of Rituals. The mid-paced “Simurgh” is steeped in groaning sludge, massively fuzzed-out and amped up with body-moving, bone-breaking riffage and merciless drum artillery. Heavy as fuck and completely headbangable, the song is nevertheless thoroughly destructive and inflamed with hate-filled vocal extremity. It also includes a sweet, nearly clean melodic guitar solo. Awesome shit.

“Psychomachia” is another exercise in sonic smashing and dismantling. The riffs are truly titanic, vibrating with radioactive decay and weighted with granite-heavy power. The guitar leads howl and scream and moan. The drumming is flat-out remorseless. The vocals again sound like the last screams of a man being torn apart by wolves.

The song’s considerable length is justified by dramatic changes of pace and an extended guitar solo, though the atmosphere of the music is invariably ravenous. And talk about a knock-down-drag-out finish! I wasn’t sure I was going to survive the utterly merciless beating inflicted by the song’s last minute and a half.

With these two songs, DeZafra amply prove they’re a brutally crushing force to be reckoned with.

The split is scheduled for an October 15 release on green, gray, and black vinyl and can be ordered here, though it can be downloaded right now on Bandcamp via this link. The wonderful artwork for the LP was created by Alex CF (Light Bearer, ex-Fall of Efrafa).