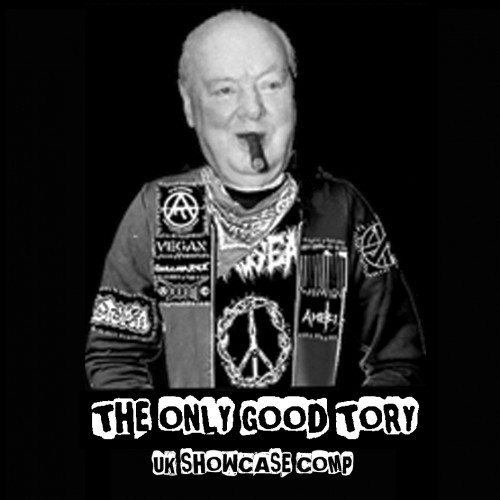 This is a milestone day for NO CLEAN SINGING. Today, in collaboration with GRIND TO DEATH, we’re launching the NCS Bandcamp page and releasing our first compilation of recorded music — The Only Good Tory — a FREE collection of 46 songs by 46 UK bands who are on the cutting edge of grind, powerviolence, harsh crust, and fastcore. It’s guaranteed to wreck heads.

The lion’s share of the credit for this blockbuster goes to our friend Alex Layzell of GRIND TO DEATH. It was he who conceived of this idea, contacted the bands, assembled the tracks, and arranged for the preparation of a killer artwork booklet prepared by the talented Kex Whelan — which includes separate artwork for each of the 46 tracks on this comp.

We’re making the comp available as a free download to support the bands — this comp is dedicated to them and their passion — and to thank the fans of honest music wherever they may live. But in the near future we’ll be offering the comp on limited-edition tape produced by DIY Noise as a prize for a competition among NCS readers. We haven’t yet thought up a contest for how to do this, but it will probably involve the submission of nude photos. Or not. We’re working on it.

As for the title of the comp — The Only Good Tory — people in the UK grind and powerviolence scene will get it pretty fast, and for those who don’t, there’s an explanation in the dedication that comes with the full-album download. As mentioned, the full-album download will also include a booklet of art, a tracklist, the album cover, and even artwork for the cassette.

And yes, this comp is a monster — 46 different bands contributed music, much of it not previously released. Some of the participants are bands we’ve featured at NCS, but many may be new to you. Trust us, they’re all worth hearing. You’ll get the chance to do that below, and of course you can visit the brand-spanking-new NCS Bandcamp page at this location, where the songs can be individually streamed and individually downloaded, as well as obtained as an album along with the bonus features described above.

Who knows? If people like this idea, we’ll do it again. Actually, we’ll probably do it again even if you don’t like the idea. The main mission of this site is to support underground music and its fans, and being able to provide a platform for distributing music for free is something we’ve dreamed of doing for a while. Today the dream comes true. Hope you guys dig this.

19 Responses to ““THE ONLY GOOD TORY”: NO CLEAN SINGING RELEASES A UK POWERVIOLENCE COMP”