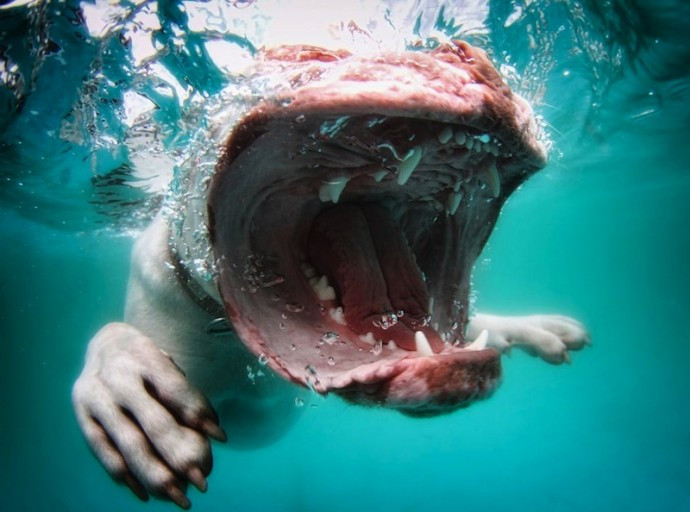 Since the last time I used some of Seth Catseel’s photos from his Underwater Dog series, he’s come up with some new ones, and he also now has a book of them for sale. In addition to the fact that the quality of the underwater photos is amazing, they continue to capture man’s best friend looking really scary and really alien, which of course makes them really metal. 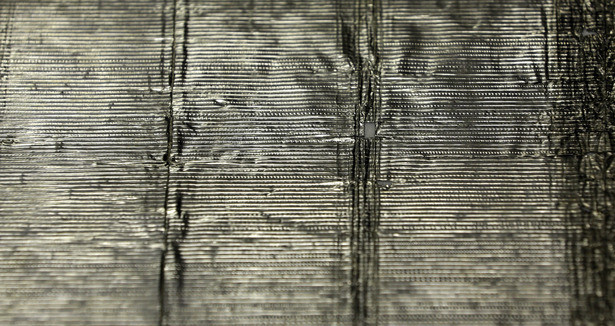 I have Phro to thank for this next item. It boggles my mind. Speaking of which, one of these days I need to look up where the word “boggle” comes from.

Anyway, here’s my best effort to summarize a much longer and completely fascinating story, which you can read in detail at The Atlantic: In 1877 Thomas Edison invented a phonograph that played sounds recorded on pieces of tinfoil. One of the first recordings was made for a demonstration on June 22, 1878, in St. Louis.

The sounds trapped on that piece of tinfoil (which you can see above) haven’t been heard since the night of that demonstration. For most of its existence, there has been no device that could play the foil, and even if there had been, doing so would have likely ruined it because the foil is now so old and fragile.

“This summer, at Lawrence Berkeley National Laboratory in Berkeley, California, physicist Carl Haber and his team were able to create a 3D picture of the foil whose topography could then be translated into sound using techniques of mathematical analysis and physical modeling to calculate how a needle would have played the recording.”

In other words, they were able to play the sounds captured on the tin foil without ever touching it.

“This is the oldest recording in the United States and anywhere in the world that was made as a reproducible recording that’s ever been played [in modern times],” Haber said. “This was very, very close to the moment of Edison’s invention — just a few months after Edison’s invention.”

And you’re about to hear it:

From The Atlantic story: “These early recordings are the earliest instances of a technology that has shaped just about every aspect of life. Recorded sound gave rise to the music industry, of course, but that’s just the half of it; ethnographic research, field recording, journalistic interviews, historical research — all of these capabilities trace back to Edison, his foils, and, later, his wax cylinders. With his invention in 1877, Haber said, ‘Edison really transformed the world.'”

Now we move from the sublime to the ridiculous, because after all, we’re getting close to Halloween.  Halloween is the most metal of holidays, and therefore everything associated with it is also metal, right?  Well, that’s my theory and I’m sticking with it.

From the Tompkins Square Halloween Dog Parade in New York City on October 20, 2012:

Okay, so maybe that wasn’t right down the middle of the metal highway, but even if a bulldog’s butt isn’t metal, wolves are unquestionably metal. In fact, in my opinion, they’re in the running for the title of Most Metal of all creatures. In Battle Ground, Indiana, there’s a 75-acre facility called Wolf Park, which is currently home to 14 wolves. The wolves are “domesticated” — or at least as domesticated as a wolf can get.

In the following video, a professional photographer named Monty Sloan tries to take some pics of the Main Pack at Wolf Park in 2009. They may be comfortable around humans, but they still sound pretty fuckin’ metal.

Redwoods are the tallest and one of the most massive species of trees in the world. Huge redwood forests used to spread along the California coast. But a logging boom began in about 1850. At that time, redwood forest covered more than 2,000,000 acres (8,100 km2) of the California coast. Decades of unobstructed clear-cut logging decimated the forests.

The following are a series of photos from the 1915-era, capturing lumberjacks at work among the redwoods in Humboldt County, California, when tree logging was at its peak. The photos are part of the Humboldt State University Library Special Collections, a series of pictures from northwest California from the 1880s through the 1920s taken by Swedish photographer A.W. Ericson. They left my mouth hanging open at the magnificence of the trees . . . and the decimation of them, too. More pics can be seen here. 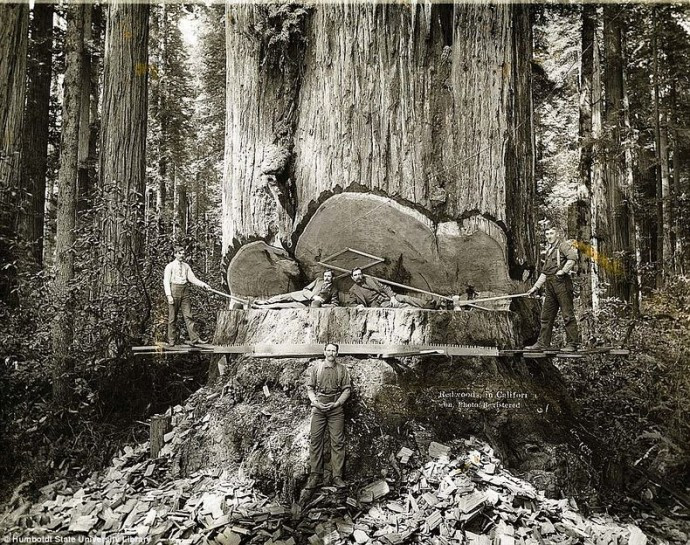 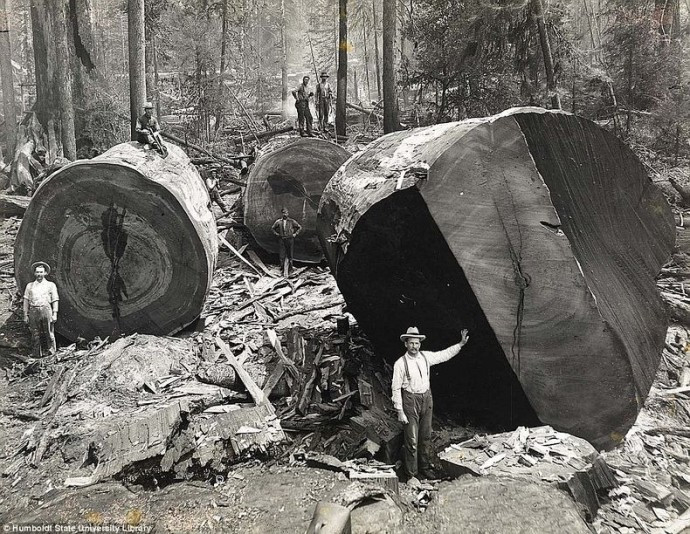 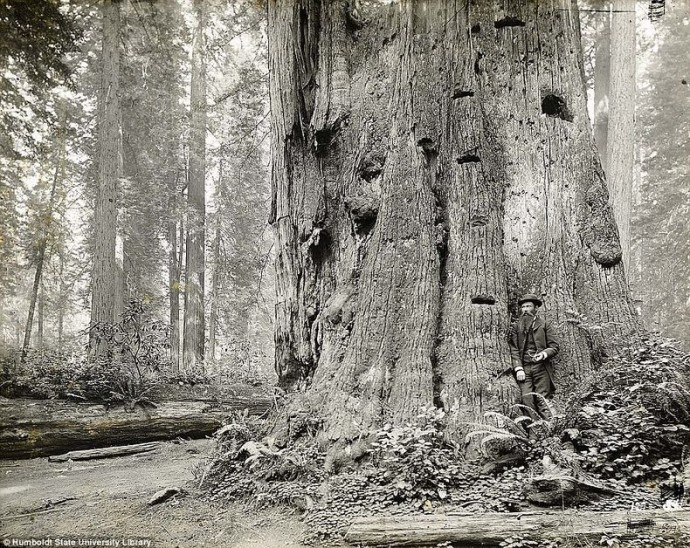 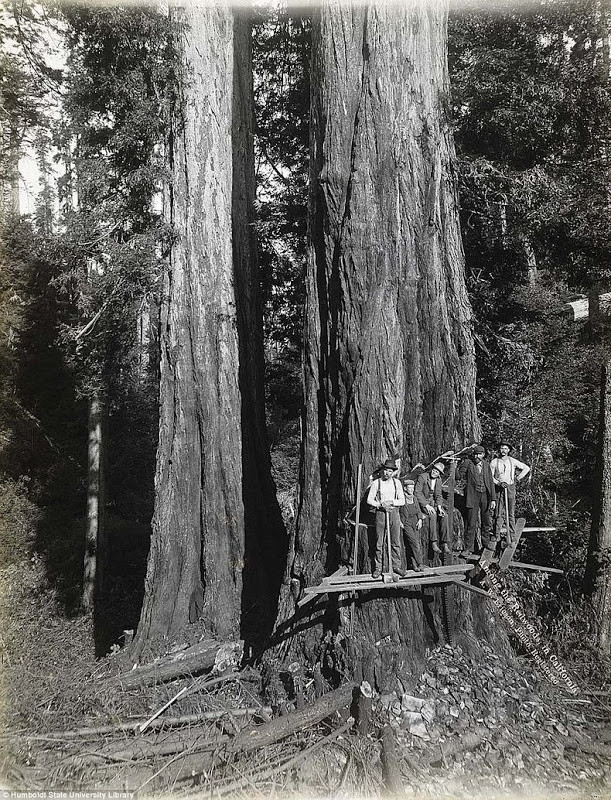 This is a photo of the next item, known as The Lotus Dome: 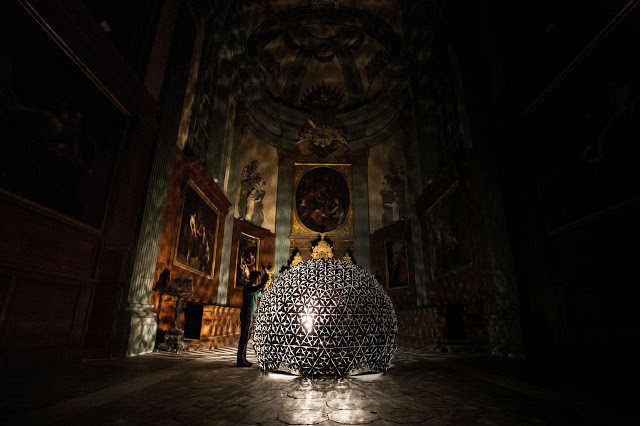 It’s an installation created by Dutch artist Daan Roosergaarde and consists of hundreds of ultra-light aluminium flowers. Interestingly, this very modern piece of art was constructed in the centuries-old atmosphere of Sainte Marie Madeleine Church in Lille, France. When people interact with the dome, it lights up and the flowers open with a metallic rustle. I thought this was very cool . . . and literally metal. Watch what happens:

More info about the Lotus Dome and more photos of it can be found here. 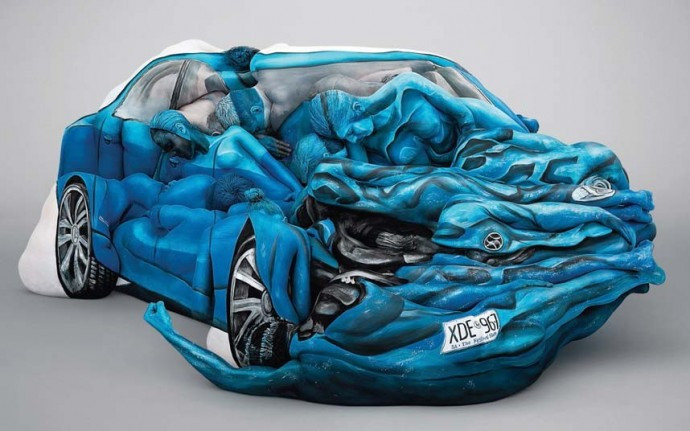 “Body-painting artist Emma Hack piled 17 naked models up on the floor before arranging their arms, heads and legs into the shape of a small hatchback. She covered them in shades of blue, white, black and silver paint to highlight every detail, including the alloy wheels and number plate…and she even made it look like the car had been involved in a small shunt [?] by exposing the ‘engine’ and leaving the front ‘bumper’ hanging off.”

And that’s what I have for you in this installment of THAT’S METAL!  Enjoy the rest of your fucking day.