That was The Retinal Circus. 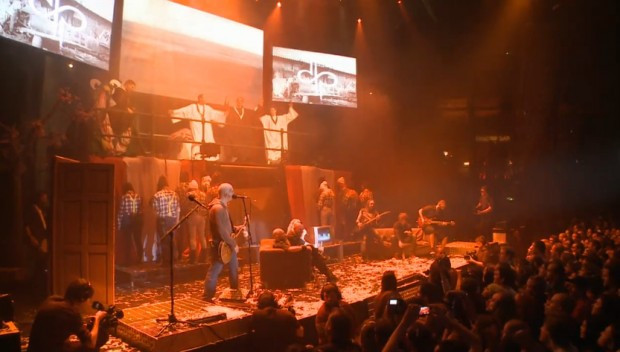 The set-list for the evening was designed around the 4th wall breaking meta-narrative Devin (looking dapper in a stunning white suit and top-hat combination) had designed, telling his story through the medium of “Harold” and his life, his dreams and fears, and the philosophical angst of his everyday existence. As such it varied wildly, covering all eras of his career. And, of course, the sheer length and breadth of that career meant there simply wasn’t room for every song you might have wanted to hear.

Not everything worked perfectly, but to dwell on these minor imperfections would be churlish in the extreme – the show was so utterly bizarre, so brilliantly ambitious and multi-faceted (both sonically and visually), that certain aspects were always going to fall short – but that’s what happens when you take the risk and aim at genius. Mad genius yes, but genius all the same.

At times Devin himself seemed to lose the plot a little, when getting worked up and involved with conversations with a pre-recorded Steve Vai (or his abusive Skully alter-ego), or even a giant floating head version of his own ‘dark side’. At times the whole concept of the show/story was seemingly abandoned for a diversion into something thematically different and off the wall, but ultimately the whole story, the whole journey, was wrapped up with great aplomb. 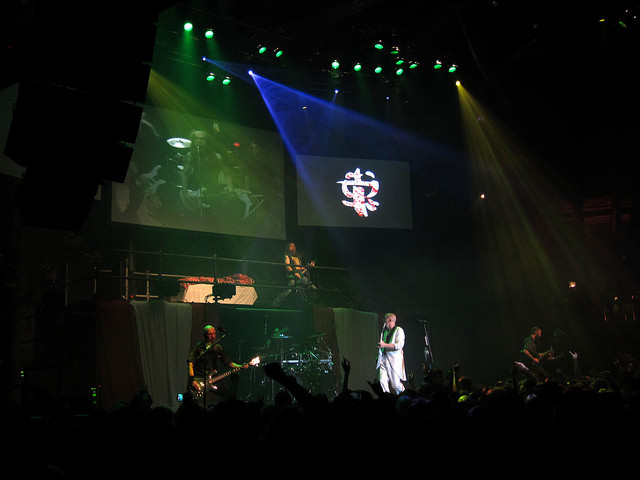 Musical highlights were the beautiful opening of “True North”, a devastating “Planet Smasher”, and an electrifying rendition of “Vampira”. An unexpected and heartfelt acoustic rendition of “Hyperdrive” led into a brilliant run of songs, from the always beautiful “Ih-Ah!” followed by the new classic “Where We Belong”.

The unexpected arrival of the legendary Jed Simon signalled something we never thought would happen… a temporary return to the era of Strapping Young Lad, a rendition of “Detox” turning the whole standing area into a mass of flying bodies. Jed stuck around for a three-guitar attack on “Bend It Like Bender!”, and returned later on for a crushing run-through of “Love?” (Ryan Van Poederooyen showing he’s more than capable of filling Gene Hoglan’s shoes).

“Life” was just as life-affirming and perfectly played as always, including the world’s shittest guitar solo, while “Kingdom” was stunning – massive and overpowering from start to finish.  “Wild Colonial Boy” was a big surprise, and led perfectly into the massive finale of “Grace”, bringing every single aspect of the show together for one climactic finale.

The stage was quickly re-set to resemble (roughly) someone’s lounge (complete with couches, xbox, and front-door), with almost the entire cast taking the stage to participate in an uber-rare rendition of “Little Pig”, as a perfect coda for the night’s technicolour chaos. Somehow, against all the odds, Devin and his comrades pulled off this mad, lunatic event, something that could have crashed and burned due to the sheer weight of ambition and expectations, juggling the sights and sounds and sheer wtf moments with dizzying energy and life.

For one night, this truly was the greatest show on earth.
The set ran thusly:

18 Responses to “DEVIN TOWNSEND’S “THE RETINAL CIRCUS”: A REVIEW”