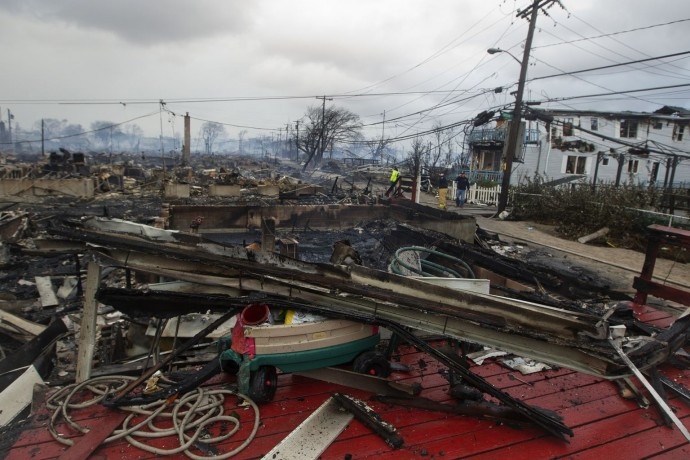 Every day brings shitty news, both large and small. We usually don’t write about shitty news. We usually try to write about things that make the shit in life more tolerable. So I guess you could call this post a different kind of Exception to the Rule.

Who came up with the name of “Sandy” for this storm? Sandy is a freckle-faced girl with a beaming smile and sparkling eyes, wholesome and playful, the girl next door. If the hurricane naming gurus wanted an “S” name for this thing, they should have gone with something like Shedim.

Businesses and schools are closed, roads are closed, subway and commuter trains have been shut down, more than 13,000 airline flights were canceled, even the Erie Canal was shut down. In Manhattan, waves topped the sea wall in the financial district, sending cars floating down streets and flooding the Ground Zero construction site. The Jersey Shore was devastated. A well-known replica of the H.M.S. Bounty was sunk off the North Carolina coast. And on and on and on.

The fuckin’ thing has even extended its reach into the Midwest. Chicago officials warned residents to stay away from the Lake Michigan shore as the city prepares for winds of up to 60 mph and waves exceeding 24 feet well into Wednesday. And though the storm has been downgraded from hurricane status to a tropical storm, it’s not finished wreaking havoc on the Northeastern US and Canada.

Worse weather-related disasters than Sandy have happened elsewhere in the world, to people far less prepared to deal with it. But rightly or wrongly, people have a way of focusing on what happens in their own country first, and for those of us here in the U.S., it’s pretty staggering to watch this happen. There will be hard times ahead for millions of people who are still riding out the storm and its devastating effects. We wish all of them the best. 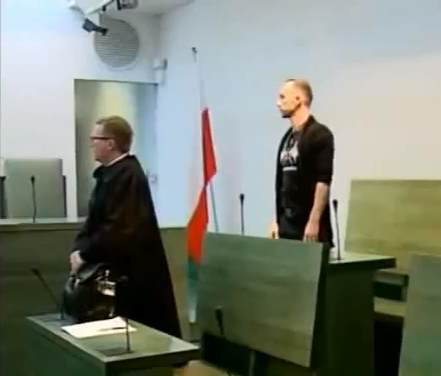 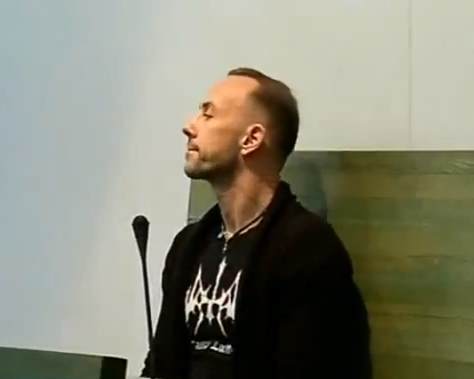 Behemoth’s Adam “Nergal” Darski (shown above, in court on October 29, 2012) has been the target of repeated legal prosecution for years in his native Poland, stemming from a 2007 Behemoth concert in which he tore up a Bible on stage. Poland, you see, is a bastion of the Catholic Church and has a law on the books that makes it a crime to give offense to religion. According to The Font of All Human Knowledge, the law reads as follows (though it may have lost something in the translation):

“Whoever offends religious feelings of other people by publicly insulting an object of religious cult or a place for public holding of religious ceremonies, is subject to a fine, restriction of liberty or loss of liberty for up to 2 years.”

So far, Nergal has prevailed in his efforts to defend himself, but yesterday things took a turn for the worse.

In the last trial, Nergal prevailed through an argument that the “offense to religion” law required proof of intent, i.e., that the defendant directly intended to cause offense to religious feelings. Nergal successfully argued that when he tore up the Bible on stage in front of Behemoth’s followers, he did not intend to give offense to anyone’s religious feelings — and seriously, would anyone have attended a Behemoth show who would be offended by something like tearing up a Bible as a symbolic statement?

Prosecutors appealed the trial court’s decision to the Polish Supreme Court, and yesterday the Supreme Court ruled that a crime is committed under the “offense to religion” law even if the accused does not directly intend to cause offense. What. The. Fuck.

Now Nergal’s case will go back to the trial court for a determination of whether he violated the law, as interpreted by the Supreme Court. If convicted, he could face up to two years in jail, although this article reports that “it is extremely rare for anyone convicted of this kind of crime in Poland to serve prison time.” I wouldn’t take too much comfort from that statement. Nergal is clearly a big target for right-wing church advocates in Poland, and a slap on the wrist is unlikely to appease them.

What’s happening to Nergal, in the grand scheme of things, may not amount to much when compared to what Sandy has been doing to millions of people on our shores. But as a symbolic representation of repression of speech in the name of religion (especially in the context of metal), it’s still worth reporting.

We wish Nergal all the best, too.

47 Responses to “TODAY IN THE WORLD OF SHIT: SANDY AND NERGAL”