There is no other word.  I mean, I’ve tried to figure out other words to use concerning this album. It hasn’t gotten its proper due praise here at NCS since it came out.  “Cryptopsy’s best album since And Then You’ll Beg…” only begins to understate it.  For me, this might even be their best since fucking None So Vile.

I mean, I’m pretty sure we all thought this band was just done when The Unspoken King came out.  That album was made of so much shit and piss that it literally could’ve formed its own land mass from the concentration.  It might’ve even been a livable landmass of piss and shit, but still… when you listen to music, do you want piss and shit, or the sonic equivalent of thundering punishment from the metal gods that channels and focuses the most powerful and ferocious aspects of humanity? Phro might (with enthusiasm) beg for the former, but I’m pretty sure 99.99% of us want the latter.

Cryptopsy’s new self-titled is the first bout of new material since founding guitarist Jon Levasseur rejoined the band, and boy is this album a kick in the teeth, balls, solar plexus, whatever fucking else sounds brutal.

Every single moment of this album pretty much dictates that you listen to it with a permanently affixed Jens Kidman face as you butcher your entire city’s population.  You get back that alien, angular riffing that’s pure trademark Cryptopsy, combined with those interspersed moments of random lounge jazz and blast furnace melodeath.  Tempo changes abound, the slams are boulder-splitting, the technicality is fret-blazing, and the vocals of Matt McGachy this time are FUCKING DISGUSTING. 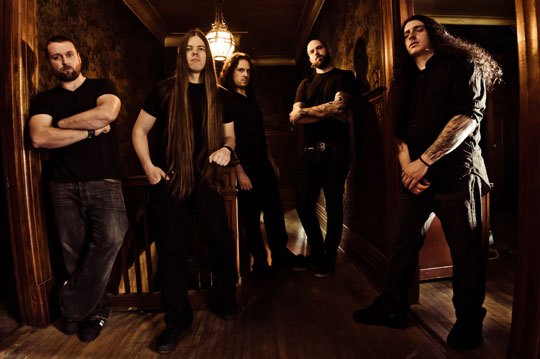 And let’s also not forget the pulverizing assault of drum legend Flo Mounier.  Say what you want about the way he reacted to the backlash directed at The Unspoken King, but there isn’t any denying this guy is still one of THE BEST extreme metal drummers on planet fucking earth.  I’m pretty sure if you picked a drummer who could be considered a human planet-cracker, it’s Mounier.

The album starts out innocently enough.  I mean, it’s just your typical swelling ambiance before the ass kicking begins.  I just don’t think anybody could actually be ready for what awaits on this record, because once the opener “Two-Pound Torch” strikes its first notes, utter fucking chaos ensues.  I’m pretty sure once this song got into full swing, I hammer-fisted a car in half, punched a hole through a cow, and willed the apocalypse itself into existence BUT I DON’T FUCKING REMEMBER BECAUSE I BLACKED OUT.

This is death metal that awakens inhuman powers inside of you just so you can intimately experience its brutality.  You are one with the br00tz. YOU ARE THE BR00TZ.

After the song’s cacophonous intro, Cryptopsy play a riff I’m just gonna call the brain-twizzling widdly-widdly which ushers in a groove that causes the Earth to become the magnetic epicenter of the universe and pulls all the planets crashing together in one beautiful symphony of shattered landmasses and nothingness.  I really dig the shift in the middle to the melodeath riff, played at a good speed with an ice-cold melody to match.

But then “Shag Harbour’s Visitors” is on next.  This song is made of so much win.  That eerie as fuck clean opening?  Yeah, that turns you from being lost in a mist-thickened bog to being assaulted by a swarm of camel spiders as they leap onto you from above.  The sound that McGatchy makes upon this song’s opening is just…fucking…URGH!  It’s one of those parts (of many) where if your face hasn’t already hit Jens Kidman mode, the deal will be well and truly sealed.

You really need your face prepared for the goat-gutting, ki-charged, solar-plexus-aimed palm-strike of “Red-Skinned Scapegoat”.  So much brutal man, so much fucking supremacy.  It’s here an old Cryptopsy trick returns:  Those randomly interspersed clean sections.  The song is frantically paced, fucked up in structure, and really throws you for a loop throughout (especially dat elevator music section).  It’s as Cryptopsy should be; brutal, full of twists and turns, and riveting.

Of course I know what you’re thinking: “TMI, this shit isn’t fast enough.  I know it’s already pushing the boundaries of light speed, but my br00tz rank requires that it at least break the light barrier in such a way that it reverses the flow of time itself, causing a paradoxical polarity that means this album will have never even existed!”.  Well, “Damned Draft Dodgers” has you covered on that front.

The production matches pretty well, and by “matches” I mean it’s like a wrecking ball that swings in to obliterate you after you’ve been bombarded by the aforementioned pleasantries.  The guitars are fat, tight, and gain-soaked, the bass has depth and sucker-punch power, and the drums sound like a symphony of demolition work.

Anyways, my opinion is this album is in Cryptopsy’s top three (which is surprising for a comeback album, I know).  I highly recommend you give this band all your money, sell your soul to them in return for forgiveness of your sin of having doubted their capacity to produce more killer metal, and then proceed to help us with that overpopulation problem by using this as the soundtrack to your mass slaughter of the many non-metal plebeians out there.