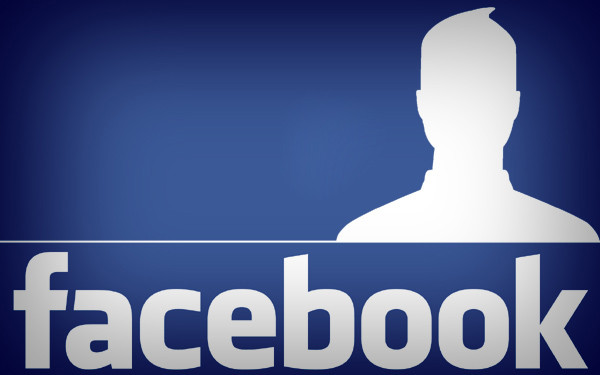 SUMMARY: In this post I’ll review the most recent evidence that over the last two or three months Facebook has intentionally reduced the reach of Facebook Page posts even further — by as much as 40% on average. But I’ll also explain two very recent changes that Facebook has rolled out which, at least for now, will allow users to see all the posts from Pages they want to follow: Page Feed and Notifications. I’ll also explain recent changes that Facebook has made to the Comment feature on Page posts.

Yes, having previously ventured into the gaping maw of Facebook’s machinations, I now find it difficult to get away from them. The rough tongue of the globe’s biggest social media platform has wrapped itself around my torso and won’t let go. I know I shouldn’t care, but I can’t help myself. Chalk it up to morbid fascination. I’m fascinated by books bound with human skin, too.

RECAP OF THE PROBLEM: THE SHRINKING REACH OF PAGE POSTS

It all started in May when Facebook rolled out their Promoted Post feature, which offered administrators of FB Pages the glorious opportunity to pay FB so that more than a small fraction of a Page’s fans would see their posts. This led ignorant grunts like me to discover that for at least a year before that, Facebook had been using computer algorithms called “EdgeRank” to pick which which fans would see which Page posts. Some would see them, most would not.

Then, in July, Facebook removed some of the statistics that Page admins could see on their Page Timelines — the stats that quickly showed the percentage of their “likes” who were seeing each post on the Page. This seemed like a fairly blatant attempt to hide from Page admins the most easily understandable evidence about how few fans their posts were reaching.

At about the same time, Facebook began reducing the number of status updates that would automatically load in user’s news feeds — with FB’s algorithms determining which ones would appear higher up in the feed (thereby increasing the chance they would be seen).

It also became evident at that time what Page admins would get by paying FB to promote posts: FB would not necessarily deliver the posts into the news feeds of more users; they would instead push them higher up the feed for users selected via FB’s algorithms (i.e., not 100% of a Page’s fans), thus increasing the likelihood that those selected users would actually see the posts.

And then, in late September, Facebook changed its EdgeRank algorithm in ways that even further reduced the number of users who would see posts from Pages they had liked — unless the Pages were paying FB to promote them.

Since I wrote my own story about these changes on October 22, a lot of additional statistical analysis has been done — which confirms that there has indeed been a significant drop in the reach of Page posts over the last three months — by 40% on average, according to this source.

Why have close observers of Facebook been spending time doing robust statistical analysis to figure out what FB has done? Because Facebook hasn’t come right out and explained what they’ve done in plain English (or any other language). I mean, fuck it, why should they start now?

And here’s some more depressing news:

On November 12, TechCrunch reported the news of a link that allowed Facebook users to see a nearly unfiltered news feed. Facebook later removed the link that same day, but EdgeRank Checker was able to use the unfiltered feed to conduct some astonishing analysis over a one-hour period before the link disappeared.

EdgeRank Checker summarized what it found as follows: “62% of Pages’ posts during this 1 hour time period didn’t even make it to the Most Recent Feed. Users who browse in Most Recent mode are still missing a majority of the content by pages they are fans of.”

EdgeRank Checker also found that 14% of the items that made it into the “Most Recent” feed were paid posts — which tends to support reports that Facebook is trying to achieve a ratio of 80% “organic” (i.e., unpaid) posts and 20% paid posts in its users’ News Feeds.

The last time I wrote about these changes, I set out one way around this filtering that I’d seen reported elsewhere — convincing fans to add Pages to their personal Interest Lists. Over the last month, I’ve seen lots of metal bands posting requests on their FB Pages for fans to do this.

According to this article, written by people who have access to insiders at Facebook, all posts from Pages that users have added to their Interests Lists will appear in the Interest List feed — at least for now.

This is far from ideal, because it depends on the willingness of fans to visit each Page they like and follow the steps needed to have the Page added to an Interest List — and then those fans need to remember to check the Interest List feed, because it won’t show up automatically when they log in to FB.

But beginning on Wednesday of this week (two days ago), Facebook has added another feature that may be the ideal solution, for as long as it lasts: Facebook has added a “Pages Feed”, which appears as a link on the left-hand side of your Home page under the category called “Pages”. According to this article that Phro sent me and this one, the Pages Feed will display all of the recent posts from Pages you have liked.

What I haven’t figured out is how FB chooses to order posts within the Pages Feed. They don’t appear in chronological order. You might see one post that appeared a week ago followed by one that appeared 20 minutes ago.

This makes it difficult to verify that all posts from Pages you’ve liked are appearing in the Pages Feed. For example, you can’t go look for a recent Page post in your News Feed and then easily go check to see if it has showed up in your Pages Feed. 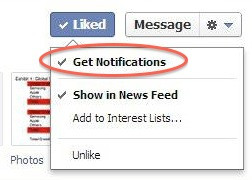 And here’s one more recent development that seems to be a reaction to widespread complaints about the diminishing reach of Page posts: Last week Facebook added a “Notifications” feature.

If you visit a Page you’ve liked and hover your mouse over the “Liked” button in the profile box near the top of the Page, you’ll get a drop-down menu. One of the options in that menu is “Get Notifications”. If you click on that option, you will supposedly be notified every time that Page posts a new status (at least according to this article).

How will you be notified?  The same way you get notifications when your FB Friends have taken some action — by seeing an alert next to the Earth symbol at the top of your Home page:

This seems just as cumbersome to implement as the Interest Lists feature — because the user has to visit each Page they have liked in order to activate Notifications. But it may be better in the long run if in fact every new Page post will generate a Notification alert to every user who has activated the Notification feature for the Page.

So, metal bands, labels, and blogs might try posting this status (though only a tiny fraction of your fans will see it):

“Facebook won’t deliver all our status updates to the news feeds of all our FB fans.  Even paying them won’t guarantee our posts will reach you. But here’s one way to stay connected with us:  Visit our FB Page, hover your mouse over the “Liked” or “Like” button, and then click “Get Notifications” from the drop-down menu. If you do that, then you’ll automatically get a Notification on your Home page every time we post a new status.”

If you’re a fan of the NCS Facebook page, I encourage you to go to our Page (here) and do that shit.

A word of warning to Page admins: If you convince all your fans to do this and then you post a flood of useless shit every day — every piece of which will generate a Notifications alert — you will see a lot of those fans pretty quickly turn off the Notifications feature for your page. So think long and hard before you spam this idea to everyone on FB. My advice, which you can take for what it’s worth, is to limit your FB posts to status updates that really matter.

The same word of warning goes for fans of Pages: Unless you want your Notification alerts to flood you like Hurricane Sandy, be selective about where you turn on the Notifications feature. If you’re a fan of bands who post a lot of crap on FB or who interest you only marginally, you might want to leave them for your Page Feed, Interest Lists, or simply your News Feed.

If you’re a Page admin on Facebook, you may have recently noticed a tiny “Reply” link that appears below Comments that users leave on Page posts. This is a test that Facebook is running on Page posts (it’s a feature that’s not yet available on users’ personal posts). It converts Comments into a “nested” format, allowing replies to appear directly below a Comment. That seems like a useful feature to me. But of course, that’s not the only change Facebook made.

According to this article, the test also involves FB sorting Comment threads according to a ranking algorithm that will put “the most engaging comments” higher in a Comment thread, rather than having them appear in the order in which the Comments were made.

For users, this means that if they don’t notice the “Reply” feature, they may write a reply to the last Comment in a thread, but it won’t necessarily show up right below the Comment to which it’s replying. Like every other change Facebook is rolling it, it will take some getting used to.

5 Responses to “FACEBOOK UPDATE: NEW WAYS FOR “BRAND PAGES” TO REACH THEIR FANS”