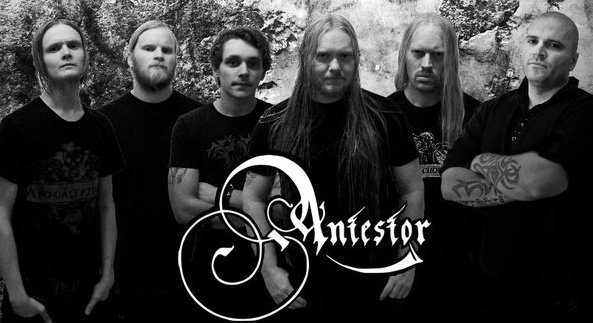 (In this milestone edition of The Synn Report, Andy Synn reviews the discography of Norway’s Antestor.)

I really wanted to do something special to mark the 30th edition of The Synn Report. I searched through my list of worthy bands for a while, before finally settling on Antestor. It certainly helps that they have a new album out (their first in seven years) at the end of the month!

Formed in Jessheim, Norway, in 1990 under the name ‘Crush Evil’, changing to Antestor in 1991, the group have produced 3 full-length albums and one EP of what has been dubbed ‘Sorrow Metal’ – a blending of doomy, melancholic death metal with a depressive black metal undercurrent.

Starting out as they did, both in terms of the time and the place, it was inevitable that the rise of black metal would influence their growth over the years; certainly the speed and intensity of their caustic tremolo passages increased as the years progressed. That said, the group also incorporate some decidedly gothic moments into their sound and augment their classically influenced structures with some distinctly progressive tendencies. 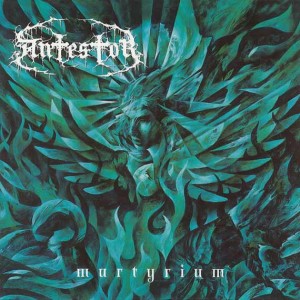 Opening track ‘Spiritual Disease’ is a stunning introduction to the band, based on a series of monolithic, crawling riffs, whose doom-laden melancholy recalls a cleaner, more tortured Incantation. Strange ripples of eerie guitar lead fade in and out of the fog, as the band move between passages of groaning riffage and eerie keys, the vocals switching between a mournful growl and a tormented shriek.

While ‘Searching’ is a display of more deathly fare, setting a more ferocious tempo and hitting hard with its staccato, stomping mid-section, ‘Inmost Fear’ is a much more nuanced affair, disguising layers of sombre clean guitar beneath a pall of dusty, guttural vocals and sharp, martial drumming, which slowly builds into doomy edifice of rough-hewn riffs and windswept keyboards that absolutely crush the listener beneath a weight of dark emotions.

The more death-metal focussed ‘Under the Sun’ stomps and shudders with brutal weight, its vocals shifting between wrathful growls and writhing screams. The song’s mid-section sees it transform into a languid lament, introducing a flowing lead line that re-occurs throughout the song and — along with the haunting keyboards — adds a tiny taste of melody to the track.

The album closes with ‘Mercy Lord’, which begins with a lengthy passage of reverent ambience and steadily introduces darker passages of ominous, booming drums and grim, guttural vocals. The song remains a forlorn death-march throughout, with only some phantom keyboard melodies to add light and shade, ultimately culminating in achingly beautiful female vocals. 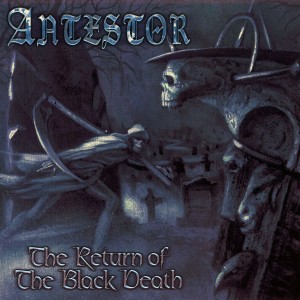 The band’s second album certainly saw them stepping in an even more sorrowful direction. Despite the steady transition of the band’s material toward a more blackened, biting sound, the colder, bleaker atmosphere of the album still retains much of the doomy melancholia that infected ‘Martyrium’, yet it dwells even more on themes of sadness and loss.

Icy and atmospheric, ‘A Sovereign Fortress’ maintains a dark and mysterious aura throughout, thanks to its ghostly keyboards and subliminal clean vocals. The drums ripple with suppressed power, while electric tremolo melodies carry the song along at a steady canter, never breaking its forward momentum.

‘Svartedauens Gjenkomst’ has a brittle ambience that recalls NCS favourites Iskald, along with a stately, medieval vibe that recalls early Satyricon in parts. The bass-lines support the frenetic guitars with a prominent presence, their thrumming contributions (particularly during the slower parts) linking the track to the same depressive vibe found on Martyrium, while the drumming locks into a nigh-unshakeable groove to support the dour and doleful guitars.

‘Sorg’ begins as a moody piece of mournful keyboards, with only the most minor of contributions from the croaked, cracked vocals, and subdued drums. Eventually this drawn-out eulogy of a track manifests an array of desolate guitars and raging, grief-stricken screams, burying the listener in a grave of lightless sorrow and pain.

Following its piercing keyboard intro, ‘Kongsblood’ transforms into a frantic black metal number, where chopping kick drums hammer out a relentless cadence and sizzling tremolo guitars creep and crawl their way under your skin. The vocals, halfway between deathly roar and blackened shriek, are delivered with power and conviction, while subtle melodies flutter in and out of the bleakness, drawn in by minor touches of fluid lead guitar and swelling keyboard arrangements.

The lengthy and ambitious ‘Ancient Prophecy’ opens with several minutes of brooding, obsidian instrumentation and choked, desolate vocals, expanding into a stygian hymn of loss and woe, where stark keys and murky guitars combine to paint a dark and haunting picture. 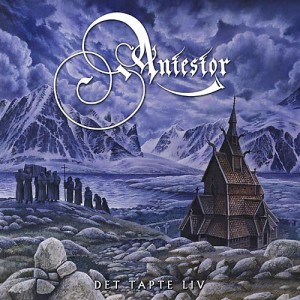 Det Tapte Liv (‘The Lost Life’) was the first of two releases to feature the infamous Jan Axel Blomberg (aka Hellhammer) on drums, and signalled the group’s shift toward a more modern, thoroughly more blackened sound – albeit one that still retained a heavy helping of sorrowful melody, along with elements of their doomy past.

Primarily serving as a teaser for their next full-length, the EP featured one track from the upcoming album, “Rites of Death”; three instrumental pieces, ‘Grief’, ‘Last Season’, and ‘Det Tapte Liv’; and one stand-alone track, ‘Med Hevede Sverd’.

Of the three instrumental tracks, particular attention should be given to the gorgeous, star-lit blackness of ‘Last Season’ for its flowing, gothic piano-work, and to the classical Scandinavianisms of the similarly piano-led ‘Det Tapte Liv’. 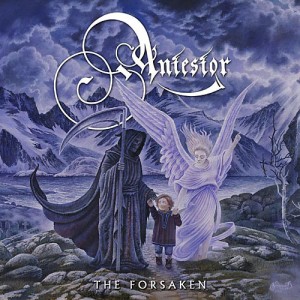 Their third album saw Antestor complete the transition into the realm of a purer (though perhaps more atmsopheric) black metal sound. The echoes of Dissection go beyond the Kristian Wahlin artwork, the album displaying a similar focus on razor-sharp melodies and furious velocity, balanced by a desolate emotional undercurrent and a death metal level of intensity.

‘Rites of Death’, slightly reworked from the EP, leads in with a mournful female vocal before exploding in an intense barrage of blackened death-riffage and scorching vocals. Intense, darkly melodic guitars and seamless, rolling drums weave together into a wall of power, broken up by clever interludes of beautiful acoustic guitar and a swirling, unexpectedly proggy, solo section.

The artful layers of clean guitar that begin ‘Old Times Cruelty’ draw a clear line back to the grief-stricken atmosphere of their debut before exploding into life in a blizzard of searing tremolo guitars and gale-force blast beats. Of particular note are the prominent organ tones, brittle piano runs, and taut, distressed clean vocals, whose appearance shifts the song in a more gothic direction, before the relentless blasting fury resumes.

Despite the steady influx of blackened aggression, key elements of the band’s sound remain unchanged, and provide a constant link to their past. ‘Via Dolorosa’ takes its time to craft a bleak and elegant atmosphere of slowly building guitars and spectral keys. The head-nodding riffs are melodic without sacrificing power, while a combination of strained tremolo guitars and pounding drum-work provides the backing for a chorus of raw, tortured vocals. To top it off, the track further recalls the group’s earlier work with a lengthy interlude of doom-drenched, drowning chords and barren, broken growls.

‘The Crown I Carry’ is a much more direct, death-metal influenced number, broken up by sudden spasms of black fire guitars and frenzied blasting, while the wind-swept and gaunt aura of ‘Betrayed’ dives even more deeply into the icy, blackened depths.

‘Vale of Tears’ even more strongly references the group’s early years, proving that the band have neither forgotten, nor entirely abandoned, their roots, only unleashing their blackened, bestial side in the song’s closing minutes. This leads into ‘The Return’ – a skin-shredding blizzard of razor-sharp, melodic black metal, which climaxes with a scintillating solo section and a truly majestic finale of symphonic keys and compelling lead guitar.

EDITOR’S NOTE:  Antestor’s new album, Omen, is due for release on November 30.  You can learn more about it at Antestor’s Facebook page HERE.  I was interested to see that the album cover features a painting by the late Polish artist Zdzisław Beksiński, whose work we feature frequently in our daily art posts at the NO CLEAN SINGING Facebook page: 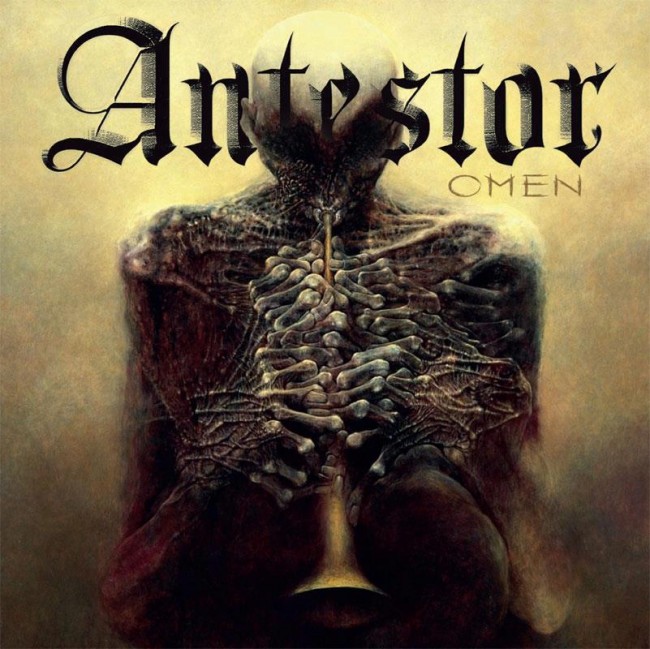