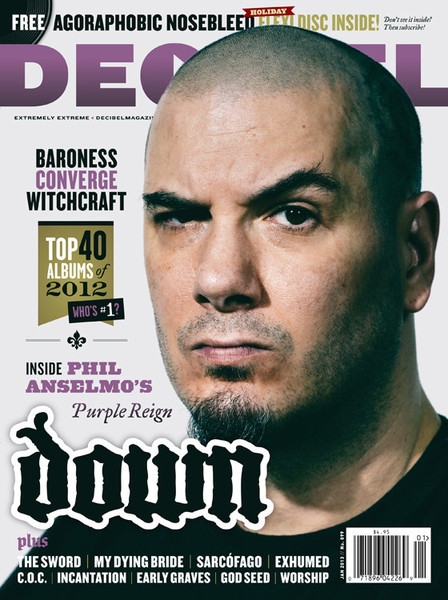 Well, here we are, the day before Thanksgiving, and year-end listmania is already upon us. Shit, most people don’t even turn on Christmas lights and start playing carols until the day after Thanksgiving. But DECIBEL magazine has broken the ice. Their January 2013 issue is in the mail, with Phil Anselmo’s baleful stare gracing the cover, and inside is the magazine’s list of the Top 40 Albums of 2012.

We previously reported that DECIBEL named All We Love We Leave Behind by Converge as Album of the Year, and now we know which albums fill out the other 39 spots.

Half the fun of year-end lists is the controversy they generate. It’s virtually a given that no serious fan of metal is going to agree 100% with any other fan’s list of any year’s best albums, because, after all, being disagreeable is one of the hallmarks of metal culture. And so there will be disagreements with DECIBEL’s list. I have a few of my own already. But let’s also be clear: in my humble opinion, DECIBEL is far and away the best metal print mag in existence, I certainly respect the opinions of their writers, and I think this list is definitely worthy reading.

Apart from generating controversy and discussion, year-end lists are worthwhile because they’re a source of new discoveries, and at least in my case that’s certainly true of the DECIBEL list. It makes me want to track down some albums I overlooked.

After today, we’ll be continuing our own Listmania series at NCS — and there will be more details about that (and invitations for your lists) in a special Thanksgiving Day post tomorrow. For now, check the DECIBEL list after the jump . . . prefaced by a few random observations.

First, though I’ve listened to a shitload of albums this year, 14 of these 40 albums I haven’t heard, including the one that got the No. 2 pick (Baroness). And of those I haven’t heard, there are only two I strongly wanted to hear but just haven’t done it yet — the new ones from Incantation and Gaza. In some cases, I know next to nothing about the bands (The Shrine, Samothrace, Farsot, Inverloch). I should check them out.  But do I really need to hear Swans and Torche?

Second, I was amazed to see Author & Punisher on the list (at No. 30). BadWolf introduced me to Author & Punisher, and I think the music is very cool — but I sure didn’t expect to see it become so high-profile. And I certainly didn’t expect it to come in 10 spots ahead of Gojira. Speaking of which, is anyone else stunned that Gojira is at the very bottom of this list? And that Meshuggah is next to last? I sure am.

Third, I’m happy to see so much old school death metal on the list. In addition to Incantation, it includes Asphyx and Grave. I also got a kick out of seeing Horrendous and Satan’s Wrath on here, too, and was very pleasantly surprised to see Evoken coming in at the No. 3 position. I really didn’t see that coming.

Fourth, where da black metal at?

Fifth, the list doesn’t include . . . well, I shouldn’t go down that path or we’ll be here all day. Check this out and let us know what you think in the comments.