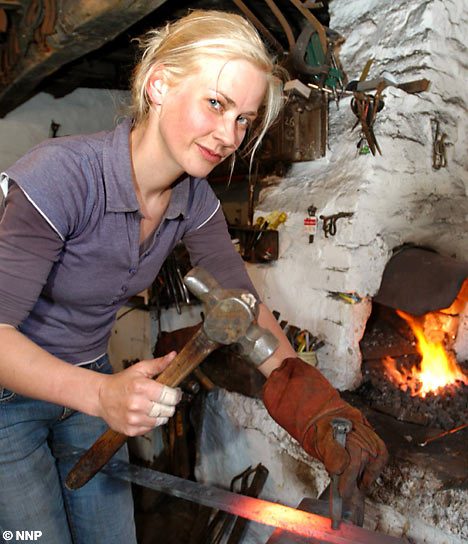 (Here we have a guest post by NCS reader/commenter Old Man Windbreaker.)

Come, join One to gaze at the red hot glow of… uh… never mind. “Hot blonde blacksmith lady pounding hot metal” is all that needs to be said.

One recently found Oneself fascinated with the thought of metals – metallic chemical elements, that is. After all, if anything is metal, a metal surely is. With this in mind, One attempted to examine what it means to Oneself when One describes something as metal. One found that anything One considers metal deals with themes of death, destruction and darkness; or at least induces thoughts of such. So, one should simply examine history for the metal most closely associated with death. For reference (and annoyance) here is a picture of the periodic table of chemical elements. 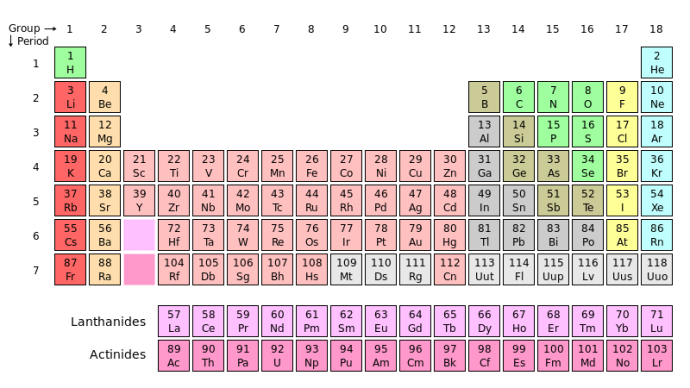 Thinking of death, One can’t help but think of war. Looking at the history of weapons, we first had copper, then bronze (copper+tin), then iron in various forms and alloys, lead and jacketed-lead in bullets, and lately alloys of aluminium in missiles. [Is One’s knowledge of weapon history alright?] Of these, iron and lead seem to be the most heavily blood-laden.

Then again, why should human actions be the means of measurement? If Lovecraft taught us anything, it is that humans are insignificant. So, One moves away from Earth towards the stars.

For those not in the know, here is a summary of (one kind of) stellar evolution – the life of a star:

Here is Prof. Stephen W. Hawking to explain steps 3 to 6, using the voice of the mesmerising Benedict Cumberbatch:

As described in One’s half-baked summary of the life of a star – Iron kills stars. And the metal that kills stars must be the most metal thing in the universe, right? Thus, Old Man Windbreaker concludes that the most metal metal is Iron.

Let us further examine the wonders that iron brings to the universe through its passive-aggressive stellar gut-stabbing.

P.P.S.: On an unrelated note, a star can be put out with water.