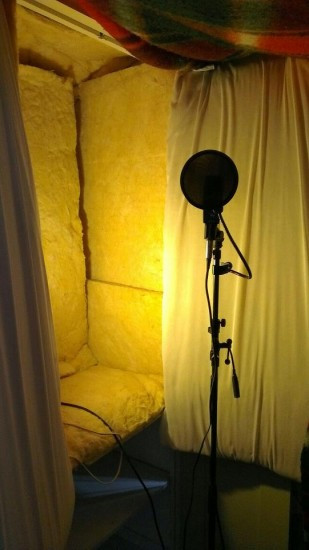 We can hear it all the way over in Seattle: Sonic booms are emanating from The Netherlands. And no, the Dutch Air Force is not on a training exercise (do the Dutch have an Air Force?). The explanation is more interesting than Dutch jets doing barrel rolls at Mach I: The Monolith Deathcult are continuing to record their new album, TETRAGRAMMATON, at Mach II.

Okay, they’re not exactly recording their album at the speed of sound. That process is proceeding more deliberately, closer to the speed of a loris sprint. But it’s as LOUD as breaking the sound barrier.

If that deep thrumming sound in the atmosphere weren’t proof enough, we now have video evidence that TMDC are at work creating their new supreme avant garde death metal masterpiece, instead of merely pretending to work. Specifically, we have:

Video of Carsten Altena explaining how he one-upped Richard Wagner and Hans Zimmer on the synths, with helpful English subtitles that seem totally legit to me despite the fact that my Dutch is limited to “Heineken”, “Grolsch”, and “stroopwafel”.

Video of Ivo Hilgenkamp nailing the guitar solo on “Human Wave Attack” through the magic of his Ibanez White Zombie “J” model guitar. Reportedly, this is the first TUNED guitar solo on a TMDC album, ever, since the beginning of time.

Video of all the vocals on TETRAGRAMMATON being recorded in The John Wilkes Vocal Booth. I think the lyrics consist entirely of “Asliiiiiiimuuuu!!”

Go ahead and watch.  This won’t take long.

The band report that the recording of bass, guitar, and drums is finished. Vocal tracking has been taking place this weekend. In other words, the raw meat is in the can, only waiting to be mixed, cooked, and mastered. We’re getting awfully hungry dudes. Forget the oven and use a microwave, will ya? That projected release date of summer 2013 is waaaaaay too far off!

To find future updates even faster than we can bring them to you, visit the TMDC Facebook page here.

One Response to “SONIC BOOM UPDATE: THE MONOLITH DEATHCULT IN THE STUDIO”