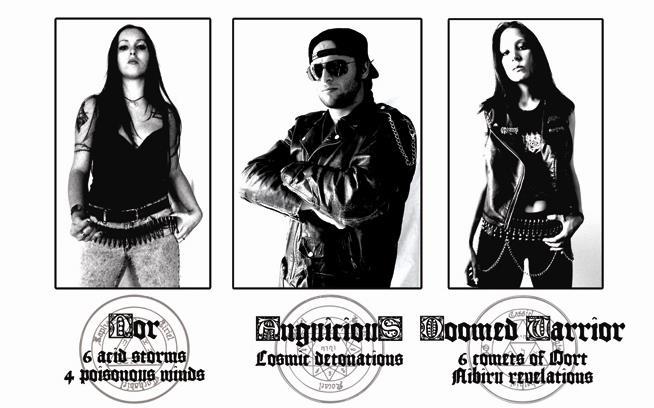 The other reason is that MaxR at Metal Bandcamp strongly recommended them. I guess that’s sort of a cheat on the MISCELLANY rules because even though I hadn’t listened to the music before beginning this excursion, I know Max has good taste. So this wasn’t a complete shot in the dark. Unless of course Max was drinking heavily when he sent me that message. 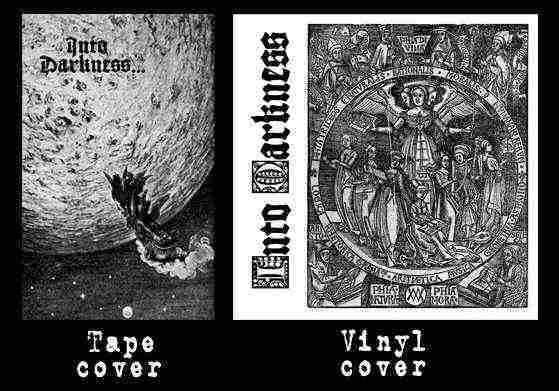 Into Darkness was started by the two musicians (Nor and Doomed Warrior) who flank the dude with the cool shades in that photo (Anguicious); they recruited him to play the drums, which he also does for a black/death band named Mefitic. The trio have produced a 2012 demo named demo 2012. It consists of four songs totaling about 25 minutes of music.

The demo was initially released on tape (now sold out). A 12″ vinyl version of the demo will be released in December by Iron Bonehead (Germany), with a CD release planned next March by Hellthrasher Productions (Poland). The demo is also streaming on Bandcamp, though it appears digital downloads won’t be offered until the physical copies are sold out.

I decided to begin at the beginning and listen to the demo’s 9-minute opening track, “Into Darkness”. And that’s what listening felt like: a gradual descent into a claustrophobic black pit of doom. Apart from the effective bleakness of the atmosphere, there were four more things I really liked about this song: The guitar tone (raw and rancid); the terrific riffs that the band unleash in the parts of the song when the tempo accelerates; the ghastliness of the vocals (remarkably reminiscent of Asphyx’ Martin van Drunen); and the great contrast produced by the clean melodic guitar leads. Oh fuck, I loved the drumming and the organic production, too, so that makes five and six.

So you know what I did? I cheated on the MISCELLANY rules (they’re my damn rules, so I can fuck them when I want to): I listened to the rest of the demo. The thrashing “Shadows” really channels the old-school Asphyx sound, and the explosive shred-fueled finish is just fuckin’ awesome. “Nemesis: Star of Catastrophe” drops back into a graveyard crawl, accented by a grisly (and highly infectious) tremolo lead and bouts of deathly double-bass drumming. “Levy 9’s Death” revs those big Swe-death chainsaws while at the same time opening up a pit of soul-sucking despair — and wait for the delicious screaming/squalling guitar solo in the song’s mid-section.

I’ve only listened to these songs once, but I’m going to say this anyway, because it’s so obvious to me:  The 2012 demo from Into Darkness is one of the best death/doom releases of 2012.

I’ll do my part to accelerate the sale of physical formats by ordering the vinyl whenever it becomes available, but do we really have to wait for all the physical formats to sell out before we can get this in digital?  I sure hope not! 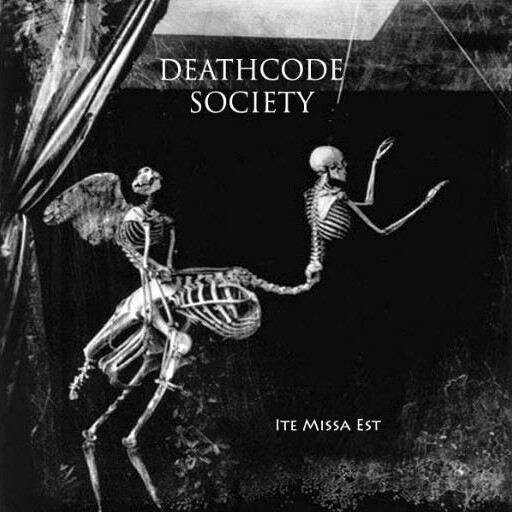 I learned about this French band a few days ago from an NCS reader (FistForFun), whose last recommendation (Aquilus) I finally followed up only seven months after his initial urging. I thought I’d do better on the follow-up this time.

Deathcode Society released a two-song, 15-minute EP in 2009 named Ite Missa Est, and they’re about to begin recording a debut album. For the recording sessions, they’re searching for two violinists and three cellists around the Geneva area. They also included this quote from heroic Antarctic explorer Ernest Shackleton in their solicitation on Facebook, which made me like them immediately:

I listened to both tracks on Ite Missa Est, which is up on Bandcamp as a $2 download: “The Inner Vortex” and “Seraphic Requiem”. The verdict? Hells yes!!

Deathcode Society rope together in a tight harness a flurry of catchy blackened riffing, powerful scalding vocals, and beautifully selected keyboard and choral melodies. “The Inner Vortex” is a gallop of black thrashing power, with sweeping keyboards that flow overhead like a blazing borealis. The song is segmented by a cool, softer interlude in the mid-section, but ends in a flood of intense riffing, percussive assaults, and orchestral grandeur.

“Seraphic Requiem” pulls off similar tricks, effectively melding together black metal fury and dramatic synth and choral melodies, like the sound of French horns and massed choirs swelling heroically over the carnage of a vicious battle in progress. The song also features some really impressive guitar and drum flourishes (there are some very capable musicians in Deathcode Society).

Ite Missa Est really is a superb offering of symphonic black metal that’s both hellish and exalting. I’m more than ready for a full album from this band. Mr. FistForFun, thank you again.

5 Responses to “MISCELLANY NO. 50: INTO DARKNESS AND DEATHCODE SOCIETY”