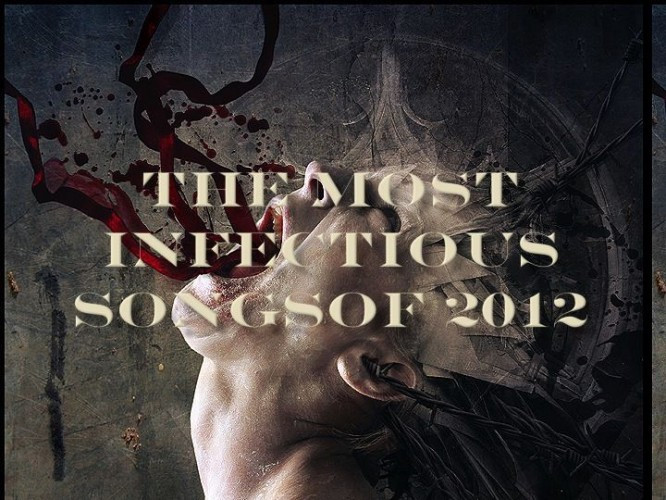 We’re getting closer and closer to the onset of full-throttle year-end listmania at NCS. Really close. So close I can smell it, and I mean to tell you, it smells so much better than I do.

Which reminds me that if you haven’t donated to us, free of charge, your own personal list of favorite releases during 2012, then please GO HERE and do that in the comments, so that I and other readers can leech off your recommendations. Seriously, I don’t know about anyone else, but I read those lists, and I particularly keep an eye out for albums or EPs that seem to be getting repeat attention.

But this post isn’t about getting lists of the year’s best releases, or even about our upcoming series of posts on the subject. No, this post is about a different kind of list: The Most Infectious Extreme Metal Songs of 2012. And as usual, we’d like your help.

In case you’ve forgotten, or you’ve become an NCS reader since this time last year, here’s what this is about:

To repeat, this isn’t a list of the best metal albums of the year. It’s not even our list of the best individual extreme metal songs of the year. Though some of the songs might actually be among the best of the year, creating that kind of list isn’t the objective. That would tax my brain way too much, and frankly this is the time of year when devoting serious effort to anything makes me queasy.

Instead, ours is a list of the most infectious extreme metal songs we’ve heard this year. We’re talking about songs that produce involuntary physical movement, songs that have got catchy rhythms, memorable melodies, sweet grooves, or anything else that sticks the song in your head and makes you want to keep listening to it.

To be one of the most infectious songs of the year, it’s got to be something that worms its way into your brain to such an extent you can’t get it out (and wouldn’t want to) — you mentally replay it at unexpected times and you go back to the song repeatedly for listening.

Maybe it’s the kind of song that has become one of your favorites for some kind of activity — whether it be drinking or smoking a bowl, working out, humping, rolling down the road in some kind of wheeled vehicle with the volume turned up, doing your laundry, doing school work, doing actual paying work, pleasuring yourself while gazing at a photo of me, getting into the right kind of mood or out of the wrong one, or even just day-dreaming.

I’ve already got my own working list of candidates and I’ve collected suggestions from our regular writers, but no doubt we’ve overlooked some gems. So, here’s what we want: Please leave comments to this post with your suggestions — or e-mail them to: islander@nocleansinging.com

I’ll then pick what I think are the most infectious tracks of the year and start playing those songs for you in groups of two as we get closer to year-end. The first year we did this, I limited the list to 10 songs. In 2010, I expanded it to 30. Last year it grew to 39. I really have a difficult time making decisions. I don’t know how many songs we’ll feature this year. We’ll see . . .

So, reflect on the music you’ve really been enjoying this year and please let us hear from you.

63 Responses to “THE YEAR’S MOST INFECTIOUS SONGS: AN INVITATION”