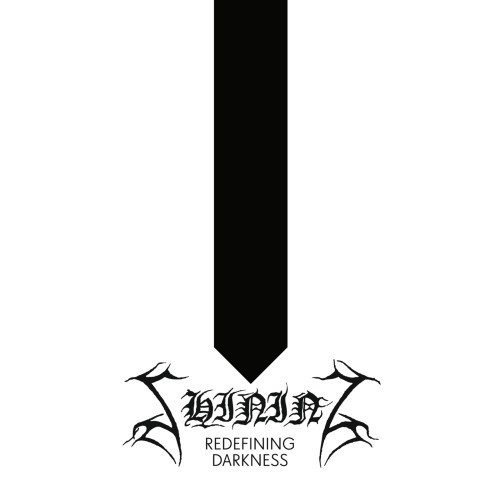 (Andy Synn reviews the new album by Sweden’s Shining, which is out now on the Spinefarm Records label.)

The more things change, the more they stay the same…

(yes, I know I’ve used that before, but it was good then, and it’s still good now, alright?).

Shining’s eighth full-length album, the evocatively titled Redefining Darkness, certainly seems (on the surface at least) to signal a new era for the band. Everything about the record, from its stark cover to its brilliantly direct title, leads you to expect the band to have made potentially drastic changes to their sound, their musical identity, their direction. So could this this really be the same Shining we’ve all come to know and “love”?

Well it seems like the Swedish tricksters have made fools of us all once again.

You see, Redefining Darkness isn’t quite the new chapter it’s been sold as. Shining haven’t changed their sound, or style. They haven’t sold-out, or altered direction. Hell, it’s not even the “return” to mind-raping black metal which Niklas Kvarforth has been promising (with tongue, I would imagine, firmly wedged in cheek).

Instead, the album sees the band continuing to expand and stretch the musical muscles they revealed way back on V: Halmstad, molding their malevolent core of blackened nihilism into ever more interesting shapes. This is less a redefinition than it is a refinement. And yet despite (or even because of) the heavy dose of elements anathema to the strict blast and buzzsaw blueprint of the genre, they remain a black metal force to be reckoned with, pursuing their own path, all others be damned.

The drumming, as always, is absolutely impeccable – avalanches of high-intensity kick drums propelling the songs onward, without sacrificing the sinuous groove and menacing restraint the band are known for. On top of this, the guitar solos (long a highlight of their albums) are similarly brilliant, cleverly composed and delivered in defiance of the repressive edicts of black metal orthodoxy. 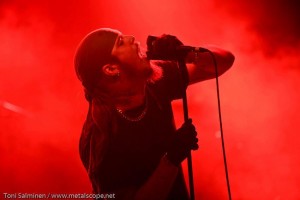 Kvarforth is in stunning form on this album. He’s never really been one for the more possessed, demonic style of black metal vocals (leaving those to Hoest on the album’s opening track ‘Du, mitt Konstverk’), instead delivering a much filthier, human form of vocal loathing. His clean vocals have also developed over time, expressing his emotional turmoil with brutal clarity. In some ways his performance is the most “extreme” element of the entire disc, really plumbing the depths of his own personal darkness to an almost uncomfortable degree.

‘Du, Mitt Konstverk’ hits you in the face right off with a noxious belch of blackened horror, before settling into a nauseating, swaggering groove, punctuated by moments of creeping melody. The second half of the song switches directions, dropping into a soothing procession of dark acoustic ambience and lilting clean vocals, weaving softly in a dreamlike fashion until the track’s final, vituperative eruption of power.

‘The Ghastly Silence’ is a proggy mood-piece which appropriates its central melodic theme from 28 Days Later to haunting effect.. Piercing saxophone notes add an eerie glamour, while a prominent, pulsing bass line gives it a morbid sort of life. The vocals add to the sense that the album is a more personal, honest affair, free of the need to live up to any particular image – the wounded croon of “The ghastly silence, spoke to me” bleeds honesty, with no dissembling, no false facades, both darkly vulnerable and oddly menacing at the same time.

There has clearly been a great deal of care taken to ensure that the band’s blackened roots retain their abrasive nature, even as the record explores ever more progressive inclinations. They achieve an almost perfect balance between beauty and the beast on ‘Hail Darkness Hail’, whose rough-hewn riffs are entwined with an aura of looming twilight and slow-breathing murder, courtesy of some lengthy, Opeth-ian acoustic sections. The penultimate interplay of smooth, silk-voiced vocals and intricate acoustic string-work serves as the metaphorical velvet glove, disguising the iron fist within, until it hammers down once more in climactic fury. 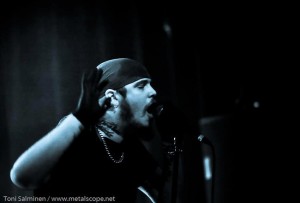 Piano-led instrumental ‘Det stora grå’ is a classically-influenced piece of beautiful, moonlit melody, capturing the beauty of the night and  providing a contemplative pause before phenomenal closer ‘For The God Below’. Moving between the realms of sombre acoustic melancholy and raging, metallic frustration, its furious, blackened edge at all times reminding the listener of just how quickly sadness can turn to rage. Perhaps the darkest ballad I have ever encountered, it’s a hymn to the shadows, delivered with the same bleak integrity and disregard for convention that has seen both Glorior Belli (‘The Great Southern Darkness’) and Watain (‘Waters of Ain’) find new ways to preach their own personal brand of seductive evil, climaxing with a majestic lead guitar refrain, spiralling into the abyss, burning and blazing, bright and unashamed.

Playing sleight of hand with our expectations, Redefining Darkness is Shining making a (re)defining statement about their future. If anything has been ‘redefined’ here, it is their priorities, putting the music, the creativity, first and foremost. It’s a direction they’ve been heading in for some time now, culminating in an album that feels like a more personal and more stark (at times even uncomfortable) glimpse at a band baring their soul, in all its beautiful darkness and ugliest truth.

Sometimes the truth hurts. Sometimes it hurts so good.

EDITOR’S NOTE: You know we always include music with our reviews, but your humble editor has been unable to locate any official, authorized streams or videos of any songs from Redefining Darkness.