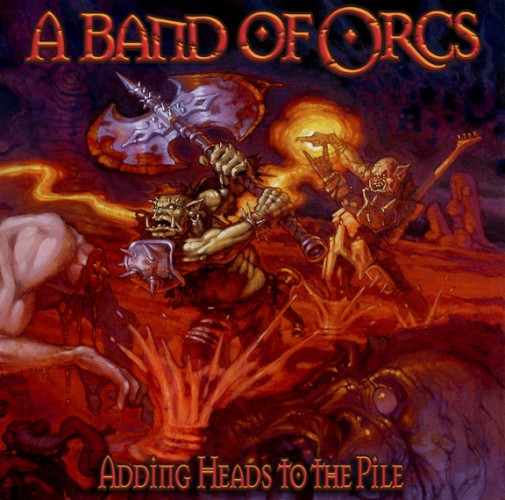 If all you know about Orcs comes from the slanderous, grotesquely inaccurate fantasies presented as fact by that blasphemous charlatan JRR Tolkein (may he roast in the firepits of Hirntodia for eternity), then you might think Orcs are nothing more than brutish, filthy, degraded demons with a taste for human flesh, incapable of creating quality death metal. You shall learn differently (or you shall perish, by the will of the Great Chaos Dragon Gzoroth).

Adding Heads To the Pile by A Band of Orcs was released earlier this fall by Itchy Music and Entertainment and represents the Gore-Stained Axe-Tribe’s first full-length masterpiece, for which all devoted slaves have waited in agony over the five long years that have passed since the Orcs’ debut EP WarChiefs of the Apocalypse emerged to universal acclaim in 2007. Lyrically, the album tells a story of war, betrayal, and vengeance. Musically, the album carves that story into the brain with a diverse collection of remarkably good songs.

In style, the album can be divided into two parts with the short, unusual instrumental track “The Darkness That Comes Before” as the demarcation point. The five songs that come before it are generally blistering flamethrowers of death-infused thrash. They’re serious hell-for-leather head-snappers, with a mix of high-octane riffs, jolting rhythms, and flashy guitar solos that skitter, swarm, and writhe like humans under the knife.

These fast-movers benefit from a super-tight rhythm section and a technically impressive array of accelerated guitar licks, and Gogog brings a deliciously evil mix of throaty roars and wrenching shrieks in his vocals. Of these songs in the album’s first half, all of which are galvanizing, “In the Keeper’s Chamber” is the standout. 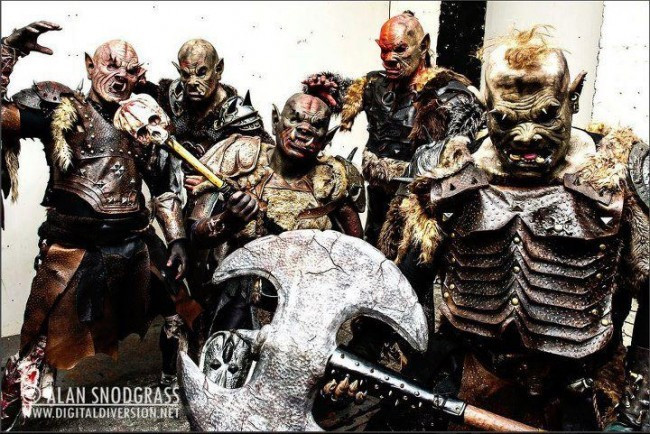 Things begin to change a bit in the last song before the dividing point, “Wyrd of the Winter Wolf”. With its galloping, jabbing rhythms, a crushing double-bass assault, and a shrill, squirming solo, it moves into the territory of high-speed melodic death metal.

And then “The Darkness That Comes Before” arrives, and it’s a big change — a slowed-down partnership between tribal drumming and an almost experimental distorted bass lead.

Past the point of that unusual interlude, the music decelerates and becomes dramatically darker and heavier. “Hall of the Frozen Dead” is a mid-paced stomp with rumbling drums and grinding guitars that reminded me of a cross between Immolation and Hate. “Lair of the Ice Wyrm” is another evil, mid-paced crusher. The heavy-booted  rhythms and groaning guitar chords are laced with dark tremolo melody and a swirling solo, producing something that reminded me of both Amon Amarth and Behemoth.

Of the first five songs that follow the dividing line, my favorite is “Stormbringer”. It’s another Behemoth-like number with titanic weight and an arrogant, infernally regal majesty. The swirling, squalling guitar leads are attention grabbers, and the song includes a very cool, haunting guitar-and-bass duet and, to top everything off, a surprising acoustic melody at the end.

Once you’ve made your way through those five somewhat blackened death metal monsters, you come to the song’s title track, which falls somewhere between the divergent styles that characterize the album’s first and second parts. It’s thrashier and flashier than the five songs that precede it, with riffs that alternately pummel and swarm, strikingly interesting guitar leads, and a shredtastic solo. It made me think of Morbid Angel in the good ol’ days. 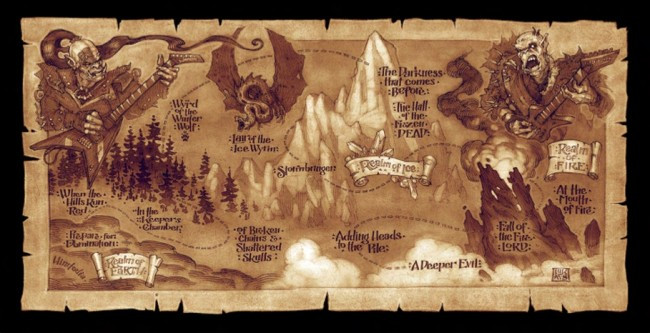 One song remains, and it’s a hell of a finish. “A Deeper Evil” is the album’s second longest song (at more than 7 minutes) and it’s completely instrumental. An acoustic guitar establishes an exotic melody, and then the heavy instruments join in and begin to explore variations on the theme. The sound of the lumbering riffs and thundering drums is massive, and the succession of riveting guitar solos that spin out over the brutal hammering turn this track into a grim, epic anthem. (I really enjoyed the bass work on this song, too.)

I should add that the album is beautifully produced, brimming with power and edged with clarity. It’s the kind of album that ought to be heard using CD-quality tracks and good headphones.

I do fear there is a risk that the appearance of the Orcs and this album’s extra-dimensional warlike story arc will be seen as gimmicks, and that as a consequence the album will be overlooked. It would be a real shame if it doesn’t receive its due simply because the performers are a tribe of bestial axe-wielding humanoids. Adding Heads To the Pile is a remarkably good album that displays an abundance of songwriting and performance talent, and it doesn’t need to rely on threats of Domination to command and justify attention.

Humans who wish to be spared can buy Adding Heads To the Pile on CD or as a digital download, along with a bunch of related merch, via BandCamp. I’ve embedded the album stream below. If you only have time to begin with a taste of what Adding Heads has to offer, I recommend you check out “In the Keeper’s Chamber”, “Stormbringer”, and the title track — and then listen to the whole damned thing.

I showed this review to a friend in advance of posting, and he thought there might be a few things in it that could cause readers to question whether it was completely voluntary and objective. I was shocked, SHOCKED I tell you, at the suggestion that I would compromise our high standards of journalistic integrity in a craven attempt to ensure my own personal survival on that fated day when Gogog and his tribe will ascend the Throne of Skulls and begin the bloody Domination over all human slaves.

Nothing could be further from the truth. Completely groundless. Rank cynicism. I have no idea where he got such an absurd idea.

11 Responses to “A BAND OF ORCS: “ADDING HEADS TO THE PILE””