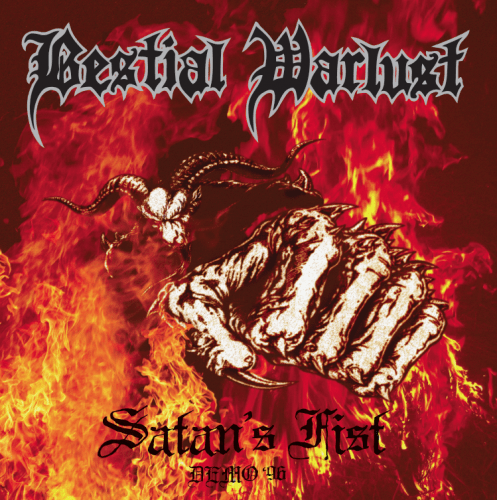 If there were ever a band name that should receive a “Truth In Advertising” award, it would be Bestial Warlust.

The band formed in Melbourne, Australia in 1993 and blasted out of the gates with two full-length albums in 1994 (Vengeance War ‘Till Death) and 1995 (Blood & Valour). They followed those with two short demos and a split, and then the band dissolved.

The second demo was a three-song release entitled Satan’s Fist. Before it was recorded, guitarist K.K. Warslut had moved on to Destroyer666 and vocalist Damon Bloodstorm (now with Cemetery Urn) had left to join Abominator, leaving two of the band’s members to record Satan’s Fist: drummer Marcus Hellcunt (now with Vomitor) and guitarist/vocalist Skullfucker.

Hells Headbangers has unearthed Satan’s Fist and has recently released it on both 12″ vinyl and CD (here). Although Bestial Warlust proved to be quite influential in the development of warlike blackened death metal as a sub-genre, listening to Satan’s Fist is not like journeying back to 1996 for a history lesson. It’s a scathing sonic assault that has lost none of its riveting appeal with the passage of time, and it more than holds its own with the best blackened death releases of 2012.

If there’s a sign of the music’s 1996 vintage, it’s in the production. Both the bass and the drums are muffled and submerged; it’s largely missing heaviness in the low end. And there’s a raw, “wall of sound” muddiness that drenches the songs as a whole. But the rough, organic production is part of the music’s primal appeal.

Played at blistering speed much of the time and doused in distortion, the guitars have a swarming, racing quality. The drumwork is equally furious, though the persistent double-bass makes its presence felt more as a constant rumble, while insistent snare and cymbal strikes drive the rhythms of the music. The vocals are horrifyingly demonic, a slightly echoing fusillade of shrieks bathed in lye.

As violent and warlike as the music is, however, it’s not simply a technically impressive barrage of high-caliber munitions. The songs are dynamic, with rapid changes in rhythms and riffs, and somehow Bestial Warlust managed to inject some killer hooks and infectious melodies into their whirling hailstorm of savagery.

It’s a shame this project petered out not long after the release of Satan’s Fist, because this brief demo is really, really good.

Samples of the three tracks from Satan’s Fist are streaming on the Hells Headbangers Bandcamp page. I’m confused by the decision not to stream all 3 tracks in full, given that the “teasers” that are streaming  are only about 20 seconds shorter than the full songs. So you won’t be missing much of what the full version of Satan’s Fist has to offer — just enough to get a bit frustrated at the songs’ abrupt endings.