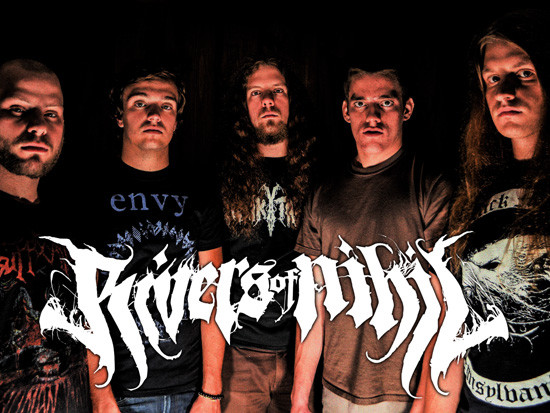 We were first introduced to Pennsylvania’s Rivers of Nihil by NCS guest writer The Baby Killer (who still needs to stick his head back in our lair). The focus of his post back in January was not only the band’s ripping recorded music but also their ability to play a fire-breathing brand of technical death metal with immaculate skill on stage, stirring the shit out of the pit while delivering spot-on execution of their complex music. More recently, we featured the band’s official music video for an ass-blasting song called “(sin)chronos”, which appeared on their 2011 EP, Temporality Unbound.

Today, we learned the happy news that Rivers of Nihil are now signed to Metal Blade Records and will be recording their full-length debut for the label with Erik Rutan (Hate Eternal) at Mana Recording Studios next March. And today we also got a demo version of a new song that will appear on the album — “Rain Eater”.

I had the volume on my computer turned up a tad too loud when I started streaming “Rain Eater”, and I think it blew some of my brains out my nose. I lost a little blood out of my eyes, too. It’s a roaring blaze of tech-savvy death metal with a flurry of progressive guitar and bass flourishes (and yes, I’m still a sucker for the prominence the bass enjoys in this band). Very nice.

Check out the new song after the jump, after you check your volume controls.

One Response to “FIST BUMPS FOR RIVERS OF NIHIL”