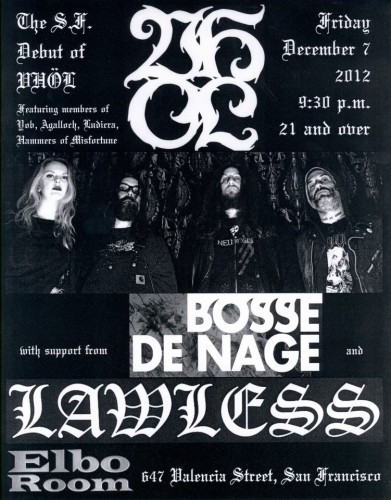 Despite an apparent lack of local promotion, San Francisco’s Elbo Room, an intensely intimate venue, was packed by the time newly minted Profound Lore act VHÖL took the stage. No wonder, considering three of the four members have deep roots in the Bay Area metal scene. Aesop Dekker (Agalloch, Worm Oroborus) was a member of the now-disbanded SF black metal band Ludicra, while Sigrid Sheie plays keys and sings in Hammers of Misfortune. VHÖL guitarist John Cobbett was an integral member of Ludicra and still is with Hammers, as well as having been involved with GWAR and Slough Feg. Only vocalist Mike Scheidt (YOB), VHÖL’s ostensible leader and frontman, hails from outside the Bay.

The “supergroup” is a fraught phenomenon in popular music. It’s often been the case that proven talent and experience don’t compensate for an obvious lack of chemistry or the creative spark. Interestingly enough, metal supergroups have fared far better than others. Consider all of the awful rock supergroups that have come and gone and then consider that metal collaborations have resulted in the likes of Down, Shrinebuilder, and Bloodbath. Considering YOB’s recent run of form and Aesop Dekker’s participation in two remarkable Agalloch recordings, it’s really no surprise that Profound Lore was so eager to back this project.

Fun Fact: Number of shows played by all three bands, combined, ever? Seven.* 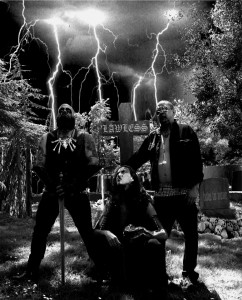 In the small venue, the members of all three bands were milling about the crowd and the merch tables as openers Lawless prepared to kick the night off. The recently formed power trio Lawless proceeded to rip off a focused set of death-tinged Bay Area thrash. Wearing tasteful corpse paint and dropping the occasional inspired, CoC-esque sludge blues riff into the mix, Lawless held the crowd’s attention and set heads banging at their best moments.

The tunes were most successful when the band pushed the tempo and truly thrashed, less so when a more traditional death sound emerged. There wasn’t enough of a clear delineation between frenetic and sludgy passages, and so the less articulated mid-tempo riffs dragged where the raucous shit slayed. All that aside, this is a new band, they have time to hone their sound, this was a great opportunity for them to pick up some new fans and I’d say they did just that.

As excited as I was to see what Scheidt and Co. had in store, I was near equally excited to see labelmates Bosse-de-Nage play an exceedingly rare live show. Something of a mystery, the SF-based black metal outfit has released a number of full-length albums, most recently III (Profound Lore), a record that has turned up on a number of year-end best lists. Somehow, the band has managed all of this while playing a total of three live shows. Three. Ever. 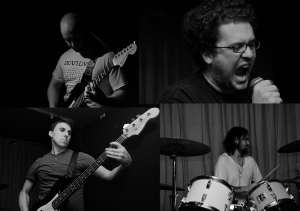 It’s tough to figure out much of anything about the group, something perhaps intentional on the part of the artists or the label. In any case, their recorded material is very strong, an undeniably unique and inspired take on modern American black metal. In fact, they are clear contemporaries of, ahem, controversial NYC act Liturgy, only instead of infamous, marginally relevant academic articles, they have… nothing. The metal community at large has not been kind to Liturgy, so perhaps BDN’s refusal to play the PR game and be pinned as hipster poseurs is a wise calculation. In any case, can a band that eschews live performance yet produces stunning records pull it off on stage? The answer is an assured “fuck yes.”

Like Liturgy, the band pulls off a maelstrom of howling, pummeling, unapologetically melodic black metal. Unlike Liturgy, the band only features one guitarist, and thus boasts a far more present, involved low end that grounds the soaring guitar and vocal work and drives the glacial, colorful chord progressions. The drumming was flawless savagery, a true joy to watch and a memorable performance on a night that also featured one of the current scene’s most celebrated percussionists.

As much as I enjoyed every minute of Bosse-de-Nage’s set, I can’t help but wonder how good they could be with a hundred shows under their belt, as there was certainly room for improvement in dynamics, mixes, the kind of things that usually only come together after countless live performances. If they have their way, it could be that we’ll never find out. 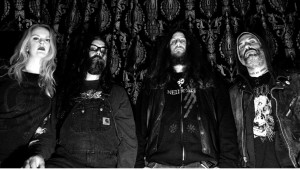 A common complaint I’ve found, reading discussions on the formation of VHÖL and the recording of their debut album, is that no one really has a clear idea of what they sound like. Certainly, many reviews of their first show at Portland’s Fall Into Darkness festival did little to lift the veil that’s surrounded this band since its recent inception. Having seen the band’s second show, I feel like I understand the problem: this is a difficult band to write about, at this time, with no recorded material as a marker.

How do you encapsulate the experience of seeing a group that fuses so many disparate elements? Vocalist Mike Scheidt pitches wailing, chorused, operatic cleans ala Anaal Nathrakh over Dekker’s often thrashy, punk-inflected drumming. Guitarist Cobbett plays swirling, cascading black metal that divebombs into uptempo but clearly Southern-tinged riffage (do I dare mention CoC for a second time in the same article?). Sheie’s bass playing is locked in with Dekker’s unhinged punk attack, providing a canvas for Cobbett’s piercing, psychedelic solos and treble-inflected leads.

The very first song of the set had the atmosphere of an evil carnival with Scheidt as its ringmaster, his harsh bellow rising into the aforementioned wizard wail. The caliber of the musicians on stage was evident; these are seasoned and talented performers. Scheidt is a great frontman, never still, clearly relishing the chance to be onstage without an instrument, and taking every chance to windmill around between Cobbett and Sheie.

More will be written about VHÖL as their album takes off and they continue to tour. Those vague reviews of the first show weren’t attempts at obfuscation: it is extremely hard to describe their sound right now, in light of the sheer variety of their influences, without a record to reference, with only a single night in the moment to go on. I’m sure those close to the musicians have had time to absorb the material, as have the engineers and other folks involved with their completed, soon to be released debut. But they aren’t talking.