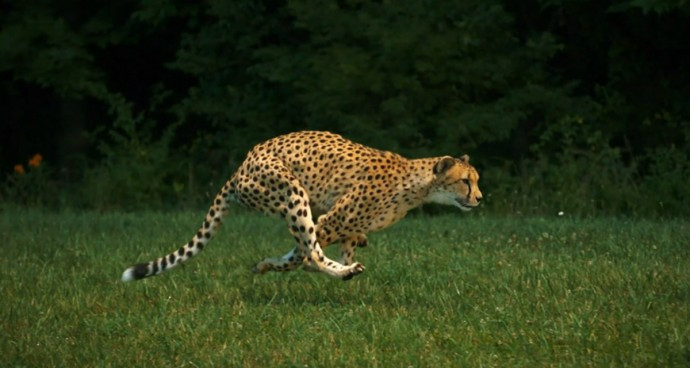 This isn’t a full-fledged THAT’S METAL! post. I just saw three videos this morning that I thought would brighten your day, because they brightened mine.

The first one relates to that photo above. I’m a sucker for cats, large or small, and I’m a particular sucker for cheetahs. If you don’t give a fuck about cheetahs, you’ll want to move on to our second item. But if you do, I found a video that you need to see.

It was made at the Cincinnati Zoo by National Geographic using a Hollywood action crew and a Phantom camera filming at 1200 frames per second. Using an installed track, they kept pace with five different cheetahs, from both alongside and in front, as the cheetahs hit speeds in excess of 60 mph chasing a lure. At that frame rate, they were able to create a crystal-clear, super slo-mo film of the cheetahs in action. If you hang in ’til the last part of the video, you’ll see how they did this, and you’ll see how fast the cheetahs were really moving.

To me, this is amazing to watch. There’s only one problem with the video: the soundtrack. It’s one of those angelic, ultra-gooey things that Hollywood uses to over-dramatize things that are already dramatic enough. I mean come on, a cheetah is a fuckin’ predator. If there’d been something alive in front of it instead of that lure, there would have been blood spray at the end of the chase.

In other words, this video needs music that’s more appropriate to the subject matter. I think Krisiun will do nicely.

Cheetahs on the Edge–Director’s Cut from Gregory Wilson on Vimeo.

The next item is also really cool. It’s a mash-up of clips from the trailers of 300 movies released during 2012 so far (go here to see the list of all the movies featured in the mash-up). The music is better than in that cheetah video: “Pruit Igoe”, composed by Philip Glass; “Tick Tick Boom’, performed by The Hives; and “Outro”, performed by M83.

I had two thoughts as I watched this:  Shit, I’ve missed a lot of movies this year. Wow, what if this were a trailer for a single movie!

Last but not least, the following video is a compilation of every zombie death on the first two seasons of The Walking Dead cable TV show. Do I really need to explain why a montage of zombie kilings is metal?