(Earlier this year we featured the venomous, eye-catching artwork by an artist named Held for the new album by Israthoum.  Today, Andy Synn reviews the music.)

Sometimes you decide to check out a band based on a whim, with little more than a few rumours or pinches of information to go on. Such was the case with Israthoum’s new album Black Poison and Shared Wounds. Knowing little about the band (originating in Portugal, and now residing in The Netherlands) it was the evocative title and album art that really drew me in to checking out this album. Remember people – album art is important, and it’s important that it reflects the music within.

The album in question delivers a heavy dose of ritualistic, immortal power, draped in a corpse-shroud of suppurating sedition, blood, and bile. Serrated and raw, without being rusty, sharp and scything, without being overly polished, it retains a heavy layer of grime and grit without losing its edge.

The vocals are a strangled howl, rising and falling in pitch-black despair, reeking of torment and degradation. They bleed darkness and filth, without attempting to sound self-consciously ‘evil’; instead, they thrash wildly and without constraint, wounded and hungry. The guitars hack and hammer with gritty determination, at times forging off at a tangent of bi-polar melody/dissonance, while beneath it all the drums wreak absolute havoc in a furious display of frenzied blasting and stalking, predatory groove. 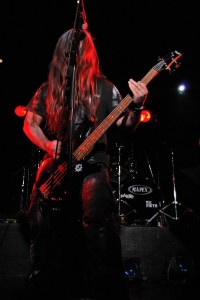 Opener ‘Necromancer’s Fugue’ creaks under the weight of skin-crawling tremolo runs and bone-breaking drums, blasting and  bludgeoning without restraint, while the fractured, shifting riffs loom and pivot wildly, strangling any light or melody.

‘The Unravelling Traveller’ is a creeping piece of horror, a thread of nightmares pulled into the waking world, which begins as a seeping river of filthy bass-lines and scratchily melodic guitars, before erupting in a torrent of acidic guitars and frenzied, yet calculated, drums, over which the vocals scream bloody murder.

Opening with a bleak, haunting groove, ‘The Presence, The Baying’ conjures an eerie atmosphere of cavernous bass work and burnt, broken guitars, which slide and slither around a core of pummelling drumming and dark, rapturous melodies. Following this, ‘Burning The Sephiroth’ goes straight for the jugular, assaulting the senses with morbid glee. The almost unrelenting force deployed here is simply overwhelming, with only the slenderest strands of piercing melody managing to penetrate the track’s iron-clad structure.

‘Devil Bacchus’ is a rotting cadaver of a song, the meat of which is in its raw, sickening grind. An ominous, back-breaking march of reeking horror, fractured, broken-bone melodies and dragging entrails of pulsing low-end provide both depth and weight, combining to create a disgusting monster of slow-burning, ugly groove. 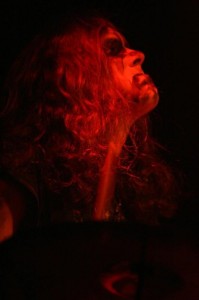 From its rippling, pulsating bass-lines, to its scathing, sandpaper guitar lines, ‘A Birthmark of Unexistence’ is an expert barrage of anti-cosmic blasphemy and sheer, metallic nastiness. The vocals capture a singular snapshot of utter torment, while the track’s looping, ebbing structure, going from hellish blasting, to neck-snapping staccato crunch, to moments of brooding , black reverence, takes full advantage of its lengthier run-time to deliver a full-on black mass of terror and introspection.

The final two tracks show the two sides of Israthoum’s blackened, rusted coin. ‘Procession of Demented’ has an almost doomy dissonance to it, its staggering tempo offset by a warped and unsettling lead refrain, which coils and unwinds with sinuous menace, while ‘Eradication Psalm’ is a battering ram of a song, its grand, contorted guitar work driven ever onward by the utterly pulverising drumming which batters mercilessly at the listener’s ears. The vocals  vomit forth a spiteful litany of hatred and disgust, artfully concealing an undercurrent of desolate melody, which comes to the fore during its claustrophobic mid-section, a moment of clarity amidst destruction, and once more during the final, fading bars of the song.

Black Poison and Shared Wounds is a well-written, and well-constructed phenomenon of an album, self-contained and self-aware, managing to capture the feral nature of early black metal without pandering to its clichés. Every track is a filth-encrusted sermon of suicidal sickness, barely constrained by its confines, pulsing with ardent madness and fervour – a perfect storm of (un)orthodox black metal brimstone, drenched in venom and fire and human degradation.

EDITOR’S NOTE: Black Poison and Shared Wounds was released by Daemon Worhsip Productions earlier this year and can be ordered here. It’s also available as both a CD and a digital download at the Daemon Worship Bandcamp site, which you can find via this link. Israthoum has a Facebook page at this location. And now, music:

One Response to “ISRATHOUM: “BLACK POISON AND SHARED WOUNDS””