The new song is named “Curtain”. It’s the third of the album’s seven tracks. It’s a sonic plague of threshing guitars, booming/blasting drums, bass-level hammer blows, and grotesquely distorted abyssal vox. It’s a moving stormfront of boiling black bestiality, heavy as hell and mercilessly destructive. I fuckin’ love it. Go HERE to listen, and then come back and let us know your reactions.

I know almost nothing about this band. In fact, I only know these two things: (1) Century Media announced today that Starkill are the label’s newest signing; and (2) the band have recorded a song called “Sword, Spear, Blood, Fire” that’s a fuckin’ killer piece of music.

The song will be on an album, but I don’t know the album’s name or when it will be released. I don’t know the location of the band or anything about their history, and I’ve found no social media presence.

The song is a hard-charging fusion of melodic death metal and black metal. Along with the racing guitars, the hooky melody, and a couple of sweet skittering solos, there’s a truckload of vocal variety. I would like more of this please. 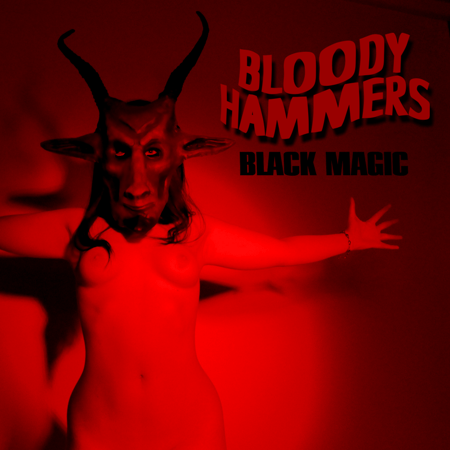 I found out about this North Carolina band, who were named after a Roky Erickson song, via a song premiere today by DECIBEL. The song is named “Black Magic” and it appears on a self-titled album that will get its official label release via Soulseller Records on February 3, 2013. It’s possible I was influenced in my decision to listen to the song by the cover art.

On the one hand, it will be easy enough to say that Bloody Hammers are just the latest band to climb all over the bandwagon of occult-themed, throwback, heavy-rock/stoner/doom bands who’ve been making an especially big mark on new music this year. On the other hand, THOSE FUCKIN’ RIFFS!

Yes, Bloody Hammer bring the big, fat, fuzzed-out riffage, and they also bring a catchy melody, a clean vocalist with some pipes that work pretty fuckin’ well, and psychedelic soloing that feels good.

I’m embedding “Black Magic” below, because despite the DECIBEL “exclusive” premiere, the whole album is streaming on Bandcamp and already available for digital download. Go THERE to hear the whole album (and at that same location you can download “Black Magic” and one other song with a “name your price” option).