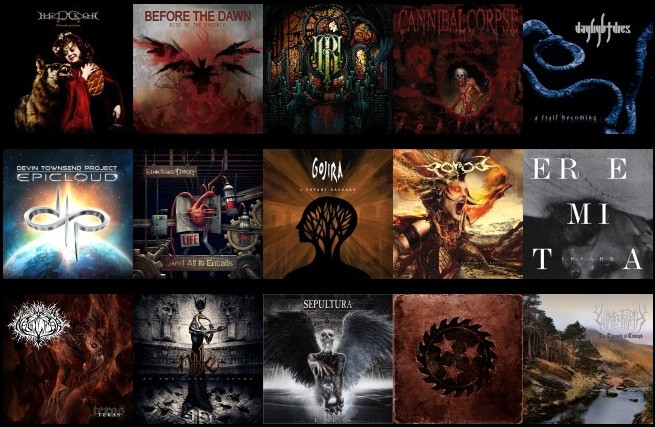 (This is the second in NCS writer Andy Synn’s week-long series of posts looking back at albums released in 2012.)

Ok, so there’s a variety of releases on this list. And not just in terms of genre. The albums featured here range from ‘Good’ to ‘Very Good’, some of which teeter on the edge of greatness but which, for reasons I might just explain if you’re all on your best behaviour, didn’t quite make the cut for the list of the year’s Great albums.

Try not to blow a gasket if your favourite album is on the ‘Good’ list, rather than the ‘Great’ list – I’ve simply tried to be as objective and impartial as possible. The albums on this list (to paint a broad picture) simply had a few too many flaws, or were perhaps a tad lacking in ambition, to really reach the pinnacle of greatness.

Similarly don’t worry if there’s an album you don’t see on either of the two lists. It doesn’t necessarily mean they’re going to be on the ‘Disappointing’ list (though try and forgive me if they are). There’s only so much time in the day/week/month/year, so certain albums I either simply haven’t heard yet (Nachtmystium, Antestor, for example) or haven’t listened to enough to form a reasonable opinion.

After the jump… all the ‘Good’ albums from this year of manic metal.

Three of the best, which fell just  a hair shy of true greatness, were Teras by Naglfar, L’Enfant Sauvage by Gojira, and Be’lakor’s Of Breath and Bone. Though they seem to have little in common on the surface, all three were almost-great albums kept from achieving true greatness by a similarly nagging sense of over-familiarity. At their strongest they were stunning albums, while at their weakest some of the songs stuck a little too close to the established formula.

The year saw some distinctive takes on the black metal template from God Seed, The Howling Wind, Reverence, and Blut Aus Nord, all of whom attempted to offer something new  – from the psychedelic/psychotic atmosphere that permeated I Begin, to the raw, esoteric nature of Of Babalon, to the oppressive, industrial horror of The Asthenic Ascenscion and the angular experimentation of The Desanctification – each of them balancing strengths and weaknesses in their search for a perfect formula.

The British contingent delivered a plethora of really good albums, with Winterfylleth, De Profundis, Enochian Theory, Wound Upon Wound, and Saturnian leading the charge. The Threnody of Triumph continued the first band’s slow and steady upwards climb, joined on their ascent by De Profundis, with the refined and ambitious The Emptiness Within, and Enochian Theory, who seduced prog-types and metal fans equally with Life… And All It Entails. Most impressive though, the debut albums from Wound Upon Wound and Saturnian established both bands as up-and-coming forces to be reckoned with, unleashing blackened doom and symphonic extremity.

A heavy helping of death-thrash gave the year a welcome shot of adrenaline, Dreaming Dead bringing some angular, twisted Death-worship with Midnightmares, while Hellish Outcast pummelled and brutalised their way through Your God will Bleed with teeth-gnashing ferocity. On top of this The Wretched End actually managed to one-up their debut album with the visceral, biting assault of Inroads.

While Whitechapel continued to bulldoze their way towards death metal legitimacy (whatever that means) with their devastating self-titled album, the legendary Cannibal Corpse cemented their own position with Torture, an album of mainly ‘Good’ songs, with the occasional ‘Great’ tune. Similarly Nile maintained their largely unfuckwithable status with At The Gates of Sethu which, while not their best album, certainly claims a place in the upper half of their awesome discography.

Bleeding Through continued their run of brutal albums with the abrasive The Great Fire, bits and pieces of Anaal Nathrakh clearly rubbing off on them, while Shadows Fall continued to refine their formula with Fire From The Sky, producing a plethora of classic, thrashed-up heavy metal tunes, with killer vocal hooks and a heaping of great riffs. Speaking of great riffs, Kairos is absolutely full of them, Sepultura continuing to defy their critics and foes with another release of full-colour Sepul-thrash anthems.

Technical death metal refused to back down in the face of the OSDM resurgence, well represented by the twisted tapestry of Gorod’s A Perfect Absolution and the crushing chaos of Beneath The Massacre’s Incongruous. Though the former wasn’t quite as good as its predecessor, it’s still a damn good album, while the latter is just utterly devastating, start to finish.

On the more melodic side of death metal both Okera and Daylight Dies produced impressive records, though both are still carving out their own identities in a field very much defined by the leaders. Slightly disappointingly (though not enough to put them on the ‘other’ list), the new album from Before The Dawn was an often stunning, but frequently frustrating, listen –occasionally lacking a certain something (not necessarily clean vocals!).

Both Devin Townsend and Ihsahn produced very good records this year, Epicloud was a pop-influenced slab of uber-bombastic metal, with both its strengths and flaws written large, while Eremita was a deeper, more expressive display of raw talent and emotion, hamstrung by some occasionally directionless songwriting. Albums from both Barren Earth and Vintersorg helped satisfy the urge for elaborate, powerful tunes, The Devil’s Resolve showing a tempered and intelligent grasp of disparate influences, and the water-themed Orkan providing as tempestuous (and occasionally uneven) a listen as its namesake.

Finally, and somewhat harder to classify, The Dreamer’s Hideaway, I Am, and Unbound mixed soaring melody (Vanisher), unconventional structures (Klone), and often shocking heaviness (Becoming The Archetype), in varying ratios, to produce some compelling, though slightly inconsistent, experiences.

Once more ladies and gentlemen, here’s the entire list in alphabetical order.

Be’lakor – Of Breath and Bone

Becoming The Archetype – I Am

Before The Dawn – Phoenix Rising

Beneath The Massacre – Incongruous

Bleeding Through – The Great Fire

De Profundis – The Emptiness Within

Enochian Theory – Life… And All It Entails

Hellish Outcast – Your God Will Bleed

The Howling Wind – Of Babalon

Nile – At The Gates of Sethu

Shadows Fall – Fire In The Sky

Winterfylleth – The Threnody of Triumph