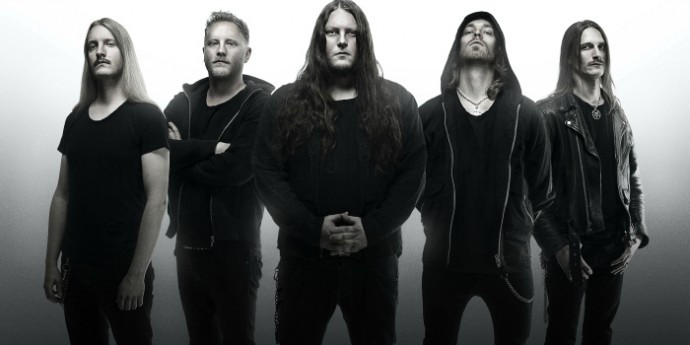 (NCS writer Andy Synn turns in this review of the live performances by Katatonia, Alcest, and Junius in Nottingham, England on December 18, 2012. Andy also filmed videos of the performances, which appear at the end of the review.)

Funnily enough, for some reason I was a little apprehensive about this show. In hindsight I’m not entirely certain why, as Katatonia were, without a doubt, in the best form I’ve ever seen them at Summer Breeze earlier this year. I can really only ascribe my trepidation to my own lukewarm reaction to the new album.

Thankfully though, there was really very little to worry about, as the Swedes have, for the past several years, been improving as a tight, driven live act, their moody sound much improved by the three-way vocal interplay that they’ve pretty much perfected now.

But before the headliners, we had two other bands, who would both provide their own form of deeply emotive musical catharsis.

Openers Junius seemed like a slightly left-field choice for an opening act, but experiencing them live put paid to any worries. Despite channelling some obvious echoes of The Cure and The Smiths, the group inhabit a musical ground not far from either of their two touring partners. It’s almost as if, coming from a very different origin point, the quartet have ended up unexpectedly sharing a sound with… metal bands? Well, good for them.

Seriously though, their proggy, post-metal-y sound certainly had a different undercurrent to it than either of the other two bands, but their rising and falling dynamic and shimmering waves of guitar certainly matched up well with the overall tour package. The vocalist’s plaintive clean vocals (matched with the occasional hair-raising shriek) provided a captivating focal point for the band, and the band as a whole performed their set with the sort of vim and vigour you’d usually associate with a much heavier act. They also took time to offer some very sincere words of thanks to the attending audience, which is always a plus.

The second band up, Alcest, had certainly brought their own devoted crowd to the gig, the audience size swelling visibly before they took to the stage. Now, when I saw Alcest earlier this year the experience was absolutely magical, the group’s mix of glorious melody and constrained, cathartic power leaving the audience completely enraptured. Tonight? Not so much.

Opener ‘Autre Temps’ suffered from some severe sound problems, with barely audible vocals and an unpleasant helping of feedback on the side, and these technical gremlins would continue to plague the set right up to the penultimate song. The sound fluctuations meant that the music didn’t quite seem to find a connection with the crowd, and this was reflected by the band as well. Despite Neige’s often enraptured performance, the four musicians on stage just didn’t seem to be able to find their groove this evening. It was only with final track ‘Summer’s Glory’ that the various threads of the show finally wove together into the sort of deeply moving, truly memorable experience that one expects from an Alcest gig. Not a bad show by any means, just one with some unfortunately unavoidable flaws.

Katatonia, though, had no such problems, firing on all cylinders from the first note until the last. The strongest impression I took home of the band was of a group of individuals who are finally becoming more comfortable with their live show and their stage presence. Jonas in particular, always a very introverted frontman even at his best, seems to be showing signs of slowly coming out of his shell. His improved confidence and presence had a knock-on effect, making his clean vocals clearly stronger and his crowd interaction just that little less awkward.

Though the majority of the set was made up of stellar material from The Great Cold Distance and Night Is The New Day, the group were obviously promoting Dead End Kings, and so they cherry-picked five of the best songs from that release, starting off with the double-whammy of ‘The Parting’ and ‘Buildings’, and let me tell you something – no matter your feelings about the latest album, the material works a lot better live.

Best of all though, the band dug back into their enviable catalogue of un-hits to deliver a brace of unexpected classics, with particular praise reserved for a biting take on ‘Burn The Remembrance’ and a captivating rendition of ‘Deadhouse’. Yes, these older songs may only make up a smaller percentage of the overall setlist but their inclusion is always welcome, and should be appreciated by both old and new fans alike.

There was one slightly odd point that I feel compelled to mention though. Mid-way through the set the band disappeared… behind the standing banners. That’s right, they didn’t leave the stage – no, this was not an encore – but just sort of wandered off for a minute or so while the lights stayed low and some ambient music continued to play. Then they came back on and simply carried on playing. It was just… odd.

The band did indulge themselves in an encore later on though, treating a captive audience to a two-headed finale of ‘Dead Letters’ and ‘Forsaker’, these chuggier, heavier numbers ending the night with a clever mixing of seamless melody and sullen, booming metallic force, sending some final shockwaves through the assembled crowd.