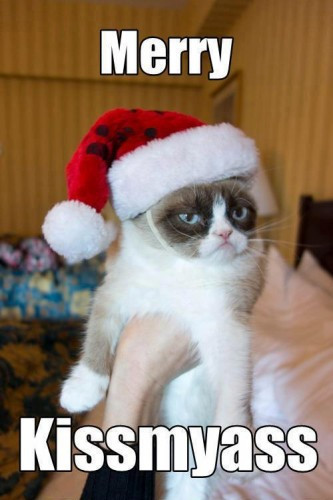 Yes, it’s time for my annual Christmas rant. I don’t have much new to say, though I have tried to think of new ways to say it.

Serious question before this post goes downhill like a mountain goat in an avalanche: Is there a country or culture outside the West where people commemorate the birth of a major religious figure by spending galactic amounts of money they don’t have buying gifts for people who don’t want them (or at least don’t really need them), especially where the major religious figure himself probably wouldn’t approve if he had any say in the matter?

Hell, why limit it to the commemoration of births? Let’s include death, marriage, getting laid for the first time, performing a big miracle, or any other key event in the life of a god, demi-god, child of god, messiah, prophet, saint, wise man, or fool who occupies an important place in a religious faith.

Here in the U.S. I’ve got a bird’s eye view of the Christmas pocket-emptying, but I have no idea whether anything like this happens outside the part of the world in which Christianity is the dominant creed. I could do some research myself, but who has time for research when you need to be thinking about what needless presents to buy and for whom?

I’m guessing the answer is No. Not because cultures and countries outside the West are any smarter than we are, but because they’re not as rich or as fully engulfed by capitalism as we are. It’s tougher to induce people to blow money in the name of religion when they’re kinda short on discretionary income. 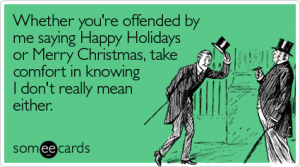 But I could be wrong. I mean, it’s not like even most Americans are swimming in extra cash with no idea what to do with it. But we have credit cards! And for those whose cards are maxed out, there’s always shoplifting and burglary! Plus, we have a ginormous groaning smorgasbord of shit we can buy!

And holy fuckin bejeezus, we Americans may be fuck-ups at lots of things, but we sure as shit know how to spend. The National Retail Federation estimates that holiday sales for November and December will increase 4.1% over 2011 to $586.1 billion. The same survey reports that the average American family planned to spend $749.51 on gifts this year. An annual Gallup survey pegs the average number at $770. That’s the average, mind you. Thirty percent of those surveyed will spend $1,000 or more.

But hey, that’s just the beginning. Let’s not forget the Christmas trees, the cards, the flowers, the food, and the fuckin’ eye-sores known as Christmas decorations. Here are the averages for all these items as reported in a December 2009 compilation of data:

Again, these are only averages. Some spend more and some spend less, but shelling out about $1,000 bucks per family is a pretty stout testament to baby Jesus.

Actually, that’s a joke. No one forks over their hard-earned dough for all this shit because they really think baby Jesus (or adult Jesus or Jesus sitting at the right hand of the Father) wants them to. I don’t claim to be a biblical scholar (who has the time to study the Bible when you need to be thinking about what needless presents to buy and for whom?), but I’m pretty sure there was nothing in the Sermon on the Mount about the gift-givers and decorators entering the kingdom of heaven or inheriting the earth. 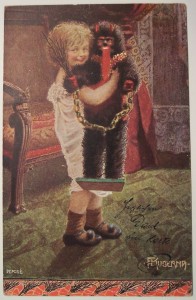 Entering hell is a more accurate summary of our commercially engorged holiday season. Apart from the pain of people going into hock in an unnecessary effort to make their loved ones and friends happy, in the U.S. crimes such as theft rise in number as a result of people’s increased financial needs during the holidays, and crimes such as assault and domestic violence tend to increase because of the added stresses of the season. Not to mention the upswing in DUI’s.

Christmas time is also the most likely time of the year to experience depression, and the suicide rate is higher during December than in any other month. And seriously, what in the fucking fuck is up with that? We have a holiday that’s a public health hazard as well as a trigger for crime sprees and a massive increase in consumer indebtedness? Those usually aren’t the kind of events worth celebrating, and the irony is that it’s a celebration that causes them.

And to compound the irony, December 25 really has nothing to do with the actual birthday of Jesus anyway. The church only settled on a December 25 Christmas in the fourth century, and most scholars have concluded that the early church picked the date in order to coincide with pre-existing pagan winter festivals as a marketing ploy to encourage the spread of Christianity.

I’d like to find the fuckers who started this gift-giving Christmas tradition and crotch-kick the shitfire out of them. How did this whole nauseating mess start in the first place?

Some scholars trace the tradition to the Roman festival of Saturnalia (one of those pagan celebrations with which the early church conflated the Nativity celebration). But I don’t blame the Romans. They just got shit-fced, and every now and then the women would tear the men apart, but every awesome party gets a little out of hand, right?

No, I blame the fuckin’ Three Wise Men. I suspect they were agents of the National Retail Federation sent back in time to plant the seeds of today’s holiday conflagration. If I could go back in time, I’d make them eat all that gold, frankincense, and myrrh. Douchebags. 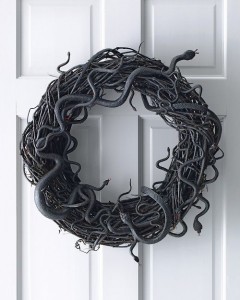 Let me be clear: I like any excuse for a party, at least when I get to choose who I party with and I don’t have to buy them presents. And I do admit that some Christmas get-togethers are fun. I will also admit that I like to give gifts at times and places of my own choosing, and to people of my own choosing. I also like looking at pretty lights, as long as I don’t have to put them up or take them down.

But I don’t need Christmas in order to do any of those things, and neither does anyone else. And although Jesus had some good things to say about the way people should treat each other, those messages have been thoroughly drowned out by the cacophony of other messages (mainly commercial) that batter our tender ears this time of year. If the dude had been born in the modern era, there’s a damned good chance he never would have come back out of the desert after his 40 days of wandering.

So yes, Fuck Christmas. Because we sure can’t kill it.