And here we go again . . . a round-up of things I saw and heard by sifting through the effluent of the internet and my e-mail in-box in search of shiny nuggets.

I learned this: It turns out that 2013 will mark the 20th anniversary of metal musicianship for Hoest, the main man behind Norwegian black metal veterans Taake. The fact that Hoest is still alive and making music of any kind is worth celebrating all by itself. The fact that Taake continue to deliver superb metal is icing on the birthday cake.

Here’s one of the things that’s being done to celebrate the anniversary: On March 1 in Norway and March 4 everywhere else, Dark Essence Records will be releasing a 20-song, 2-CD collection of Taake music entitled Gravkamre, Kroner og Troner (“Burial Chambers, Crowns and Thrones”). The contents are primarily rare and previously unreleased songs, as well as alternative versions and recordings that have previously been available only on vinyl — but the album will also include exclusive new tracks.

Today I saw that Taake have begun streaming one of the tracks from this anniversary album named “Et Pust av Oeyne”. It’s a riff-heavy mosh-trigger of a song, marked by Hoest’s scathing vocal attack and some old-school, hard-rocking rhythms. It also includes a dose of blasting and thrashing, as well as a lengthy, spiraling melodic breakdown.

I’m really digging the variations in the song and hope you will, too. 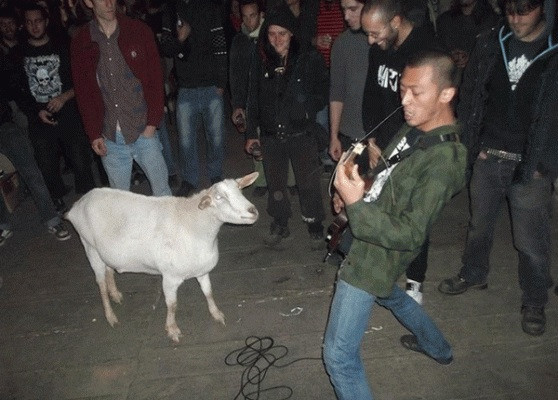 Singapore’s Wormrot are world-class ass-kickers. They kick so much ass that the world’s supply of ass has dwindled to endangered-species status. This is not good news for metalheads who are still waiting for their first piece of ass.

But take heart. Although ass is in short supply, there are still plenty of goats. And goats enjoy Wormrot. Or at least one goat does. Specifically, I’m referring to the goat down front in the following, recently uploaded video, which captured Wormrot playing live in the middle of a squat in rural France in October 2011. Apparently, this metal-loving goat’s name is Lulu, and amazingly she has not changed it despite what Metallica and Lou Reed have done to tarnish its luster.

The title of this video on YouTube is “Wormrot and the Punk Sheep!”, but my wife and I own goats, and Lulu is a goat, not a sheep. It’s important to be clear about such things. Goats are metal, sheep are not. 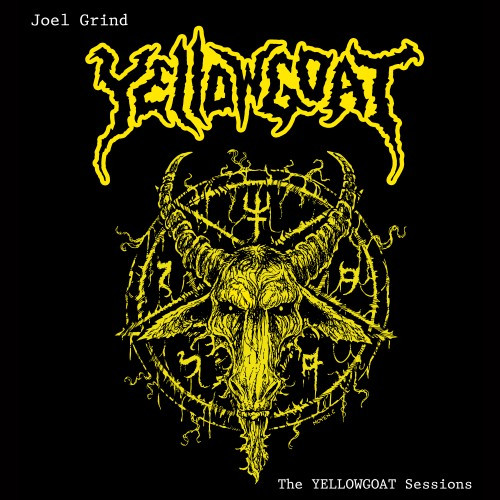 While we’re on the subject of goats and ass-kicking, here’s an update about Yellowgoat, the side project of Joel Grind, who of course is the driving force behind Portland’s one-man thrashtastic wrecking machine, Toxic Holocaust.

As we reported back in May, Joel has recorded a 9-track Yellowgoat album, which now bears the title of The Yellowgoat Sessions. When we took note of this previously, all we had was an 8-minute sequence of song excerpts from the album. But yesterday I saw that Yellowgoat has now uploaded a complete track to Bandcamp, where it can be downloaded for free (but with encouragement to contribute $1 for the sounds).

The song is “Cross Damnation”, and it’s one filthy, fun-loving, fuzzed-out fusion of blackened d-beat and punk — a stripped-down homage to earlier days. As I’ve noted before, it makes sense that Joel Grind picked a name for this project that pretty obviously came from the cover of Bathory’s first album.

The Yellowgoat Sessions will be released digitally on January 15, 2013, with vinyl to follow in late February on Acid Rat Records. Here’s the link to the track on Bandcamp, followed by the song stream: 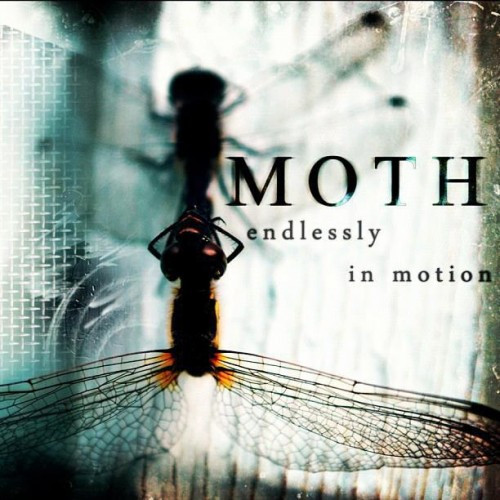 I discovered (and wrote about) Denver-based Moth back in August at the prodding of that scamp KevinP, he who will not take No for an answer. Back then, they had released an official video for a song off their forthcoming debut album Endlessly In Motion, which I now understand is due for release on January 11. Yesterday, again at the gentle prodding of KevnP, which has left bruises above both kidneys, I checked out a teaser reel for the album that Moth has put up for streaming.

Holy shit, but it does make an impression. The music is pummeling, scarring, jolting, melodic, fiery, flashy, atmospheric — and I can already tell that the songs have individual character. Digging the throat-scraping acidic vocals, too (and I’m even being seduced by the clean ones).

Yep, this album sounds like it’s going to be good. Hear for yourselves below.

Check out Moth on Facebook via this link. Their official web site is here.

12 Responses to “SEEN AND HEARD: TAAKE, WORMROT AND A GOAT, YELLOWGOAT, and MOTH”