(In this post, NCS writer DGR reviews the debut album by Æther Realm, which is scheduled for release on January 8 and can be ordered here.)

Æther Realm are a four-piece melodic death metal band from Greenville, North Carolina. They’re a bunch of young upstarts who have found the recipe to make music that sounds so much like their influences that they have shot past the point of merely paying tribute and landed right next to them.

Their brand of melo-death falls heavily into the realms of bands such as Ensiferum, Kalmah, and Turisas. There’s enough of the pagan sound as promoted by the aforementioned bands, but with a hurdy-gurdy folk influence as well, to make a band located on the east coast of the United States sound like they hail from the colder sections of Europe. They’ve even jokingly had a note on their Facebook page which states,  ‘We Are Not From Finland’.

For much of the last year, Æther Realm have been building toward the release of their debut album, One Chosen By The Gods, and that is now set for January 8. One Chosen By The Gods is a nine-song affair, and if you’ve been following this band for a bit (I gave them a small shoutout in my 2011 year end roundup here at NCS, so maybe since then?) then you’re probably already familiar with three of the tracks (“Swampwitch”, “Ravensong”, “Odin Will Provide”). But of course the album delivers much more.

And if you haven’t previously been exposed to Æther Realm, then One Chosen By The Gods will come as one of the lead-off pleasant surprises of 2013. 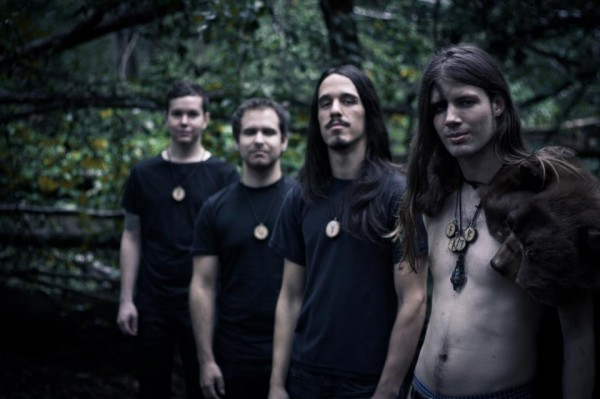 A two-minute intro track leads into the main disc. From a shuffle standpoint, it’s an intro that functionally won’t do much to get you excited on its own, but it works very well as a lead-in to the disc. The opening melody actually winds up tying in to the ending guitar part of album closer “Oak”; which means that if you have One Chosen By The Gods on repeat, then the two flow in to each other well. It’s a nice touch.

The album immediately endeared itself to me by not really having any slow songs. The slowest is probably the percussive march of the battle-metal-themed title track, but even that one speeds up to a solid clip. The newer material falls very much in line with the three songs the band had previously released, and they are all just as strong. “Oak” has become something of a personal favorite due to its epic six-minute length and multiple layers, and the second song, “Hourglass”, immediately calls to mind the previously released “Odin Will Provide”.

I can’t sing enough praise for the song “Swampwitch”, which has been going around the internet for a while now. It’s one of the faster ones on the disc and probably the most straightforward melo-death, but its key orchestrations and guitar riffs make it a strong contender for best song on One Chosen By The Gods.

“Swampwitch” features a guest appearance by musician Eric W. Brown (he of Vale Of Pnath, Swashbuckle, and personal favorite Rainbowdragoneyes fame), who takes up a verse of the song with a monstrous roar for a decidedly epic section. It allows vocalist/guitarist Vincent Jones (although everyone in the band takes a shot at the vocals so it’s hard to tell whose angelic voice it is at this exact moment) to take up the harmonizing in the background, which helps make that part one of the strongest moments on this album.

Æther Realm have an astute sense of just how much synth work to add to each song, so that they rub up against the cheesier moments of their chosen genre without allowing them to overpower everything. They also add an extra layer to keep listeners locked in to each song as the band tears through riff after riff with reckless aplomb.

Technically, the guys in Æther Realm have a lot of talent for what they are doing. Considering that they are ostensibly a ‘local band’ who have managed to break out of their scene due to the internet and Facebook, it is all the more impressive. They also sound really good on One Chosen By The Gods, and you can hear everything on this disc clearly.

The drums (as provided by Tyler Gresham) are a flurry of blasts and melo-death two steps. Guitar-wise, Æther Realm employ a very familiar twin-guitar attack, with most of the main vocals coming from their bass player. The music isn’t too bass-focused, playing heavily to the guitar worship that most melo-death exhibits. You get a strong variety of very melodic leads, and if neither of the guitarists are doing it, then the keyboards are. Solos also abound throughout One Chosen By The Gods.

Every song on this album is a high-energy blast of metal, but the band never lose track of how their massive wall of keyboards, guitar leads, and drums all interplay with each other, so that you never wind up with just a cacophony.

Most importantly, however, is that Æther Realm sound like they actually belong with the groups who have inspired them. It’s easy to say you’re inspired by bands such as Ensiferum or Blackguard, but these guys manage to put out music of such quality that they could fall in right alongside them on a tour.

That’s what makes One Chosen By The Gods so great. You could easily adopt the view that these guys aren’t really breaking new ground within their genre (and likewise, they haven’t declared that they were going to). However, by setting up boundaries for themselves in aiming to be part of a genre so rigidly, they may have actually taken the more difficult path to success.

How often have you heard bands say that they play a certain style of metal, and then you hear boring, rehashed, by-the numbers riffs with decent vocal work which does sound like what the band described – but it’s not interesting. That is a very difficult pitfall to avoid, and one that Æther Realm have managed to avoid. They have made music that not only sounds like their influences, but also is of such quality that they capture the magic that those influential bands had when they first became popular and seemed magical to everyone. Really, that’s an almost incredible accomplishment.

I’m repeating myself here, but “Oak”‘s transition back into the melody that launches  the whole disc ties things off so neatly that One Chosen By The Gods feels like a solid, well-built, cohesive package. I can’t help but get excited about a band like this who are literally just getting off the starting block with an album this strong. One Chosen By The Gods is an excellent collection of music for genre fans and a great listen for anyone else. Æther Realm have a huge amount of potential to be great, and One Chosen By The Gods is the band putting their best foot forward and making one hell of an entrance.

10 Responses to “ÆTHER REALM: “ONE CHOSEN BY THE GODS””