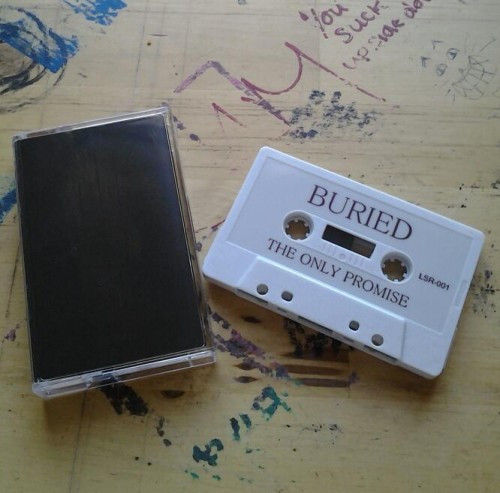 (We welcome back guest contributor BreadGod with his review of a late-2012 demo from a Redlands, California band named Buried, which is now available as a “name your price” download on Bandcamp).

Some time ago, I wrote a short blurb about Buried during one of my weekly strolls across Bandcamp. The frontman really liked what I said about his work, so much so that he sent me a free copy of the demo. I received the package a few days before Christmas and it turned out to be what the ancients called a “cassette”. My first reaction upon seeing it was, “What is this rectangular monstrosity?” Luckily, it came with a free download code, so that way I didn’t have to go on a quest to obtain a cassette player.

As the band’s name implies, this demo is a slow descent into the grave, a grand and morose display of blackened drone. The drums are monstrously slow, only one beat every ten seconds or so. The almost complete lack of percussion reinforces the bleak atmosphere. The bass strings are plucked only once every couple of seconds, giving the music a dank and cavernous feel.

The guitars are the backbone of this dark performance. By cranking up the distortion, they are able to play just one chord and let its black smoke drift across the plains, engulfing and suffocating all life in its path. The vocals consist of a rasp that’s pretty standard, but they’re made creepy by the fact that they show up very rarely, like a strange, gaunt creature that has emerged from the shadows. 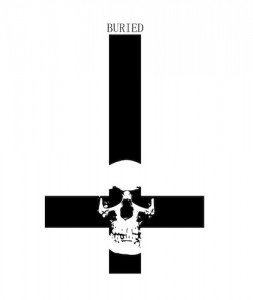 Of course, Buried aren’t all drone and misery. About four minutes into the last song, they switch things up by playing at a much faster tempo. The drums pound and the cymbals clash with relentless fury while the guitars still spew their miasma, this time in a bit higher tone. Drone purists may not like this, but I do. During the climax, the pounding of single piano keys echo through the subterranean realm.

I don’t usually like drone, but I really enjoyed this. The music Ryan Herrera has crafted here is absolutely suffocating, and I loved every minute of it.

2 Responses to “BURIED: “THE ONLY PROMISE””