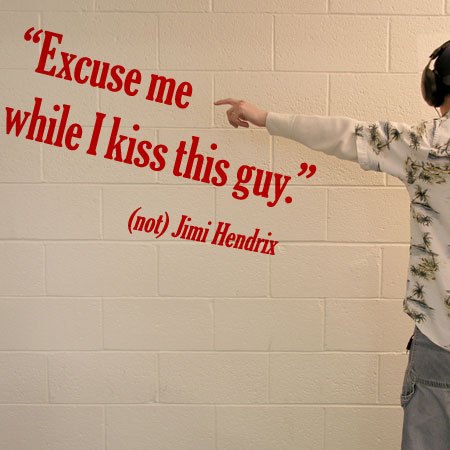 (A post in which Andy Synn presents five of his favorite mondegreens . . .)

This edition comes with a warning. If you want to continue hearing these songs in the ‘Correct’ way, don’t click the jump to the main article, because what I’m covering here today are the sort of misheard lyrics that essentially ruin a song for you forever. Ok, maybe not ruin, but they definitely stick with you. Once you’ve heard them, you can’t un-hear them.

And I’m not talking about the youtube-style ‘Boat Rudder’ or ‘Fishmaster’ parodies where someone’s posited ludicrous alternative lyrics. I’m talking about just a tiny line here or there that I accidentally misheard the first time round, and have never really been able to shake. Thankfully each of these also gives rise to some unintentional hilarity, as they definitely add a new interpretation to each of the tracks!

Some of them are literally only a one-word change, but that’s enough to completely alter the meaning of the surrounding lines, mostly in a rather ludicrous way!

Again – don’t go any further unless you want some songs ruined for you forever!

Back in the day (18-ish) when I used to hit various metal clubs with my friends, they had a habit of playing this particular Biohazard track pretty much every night. That’s fine, it’s a catchy enough song, and a lot of people like Biohazard. I personally don’t. But I still can’t forget the fact that the pretentious opening lines of the song still sound like:

‘I question not me, it only happens to others
I can’t deny reality as life gets smelly!!!’

You really get a feel, for just how pungent their upbringing must have been, on the stinky Brooklyn streets.

Oh how I love this song. I do. With its storming pace, gorgeous crystal-clear melodies, and lyrics about… the horrors of studying chemistry? Ok, maybe that’s not what they’re meant to be, but I swear to you that Herbrand Larsen’s clean-vocal refrain says:

‘You hold the key, to misery
Check all your roots and valency’

Mr Larsen must really have not enjoyed those classes in school.

(FYI – Valency is – a property of atoms or groups, equal to the number of atoms of hydrogen that the atom or group could combine with or displace in forming compounds)

Jesse Leach has always been the sort of frontman who wears his heart on his sleeve. And never more so than in Killswitch’s breakout single ‘My Last Serenade’. Honest and vulnerable, you still may have missed the clever sub-text of the song, as at 2:11, he exposes his lifelong obsession with nautical birdlife:

‘It’s your choice
Find the seagull
It’s on your head!!!’

A true classic, I think we can all agree on that, yes? One of the great metal songs about the pain and destitution of drug addiction. But there’s more to it than that. There’s another layer of depth here. One which clearly speaks to the dark side of family gatherings in the Ulrich household. That’s right. Board games.

We’ve all been there. The neverending game. Where no-one wants to admit defeat. And everything just keeps going round in circles. And we’ll all know the horror that same time next year when Auntie Doris or Uncle Kevin will utter the fateful words, “How about a game of Monopoly then?” And the cycle of pain will continue.

‘You put your ants on me
And I learned words, I didn’t know before’

You can’t really blame a guy for coming up with some new swear words in this case, can you? Those jam sandwiches are probably RUINED now.

16 Responses to “FIVE OF MY FAVOURITE . . . MISHEARD LYRICS”