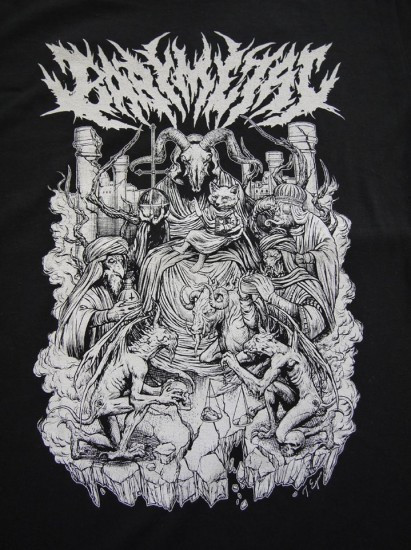 I sure as fuck didn’t see this coming. But thanks to Phro, I see it now, and so do you. And it turns out to be a nice coincidence, as I’ll explain.

In a nutshell, metal album artist Toshihiro Egawa has created t-shirt artwork for the Japanese Kawai Metal band BabyMetal. It is Phro, of course, who has periodically reminded NCS readers about the existence of BabyMetal ever since we first learned about them in October 2011. For those not in the know, BabyMetal are three cute girls (no pedo!) who play a perversely catchy mash-up of J-Pop/Idol music and metal. Over time, they seem to have been getting darker in their imagery and their outfits. But getting Toshihiro Egawa to create a shirt design is like a really giant leap forward into a death metal abyss.

Egawa is a 40-year old artist from Osaka who has become one of the world’s best known creators of album art and shirt designs for the more brutal end of the death metal and slam spectrum. To see just a partial list of bands for whom he has created artwork, go here. In fact (and here’s that coincidence), he created the thoroughly disgusting, gore-drenched cover for the forthcoming album by Devourment that’s the subject matter of a new lyric video which we featured in a post earlier today.

From Devourment to BabyMetal is what I’d call a very sharp turn on a very slick road.

I fuckin’ love what Egawa has done for this shirt, so much so that I’m putting a bigger version of it right here: 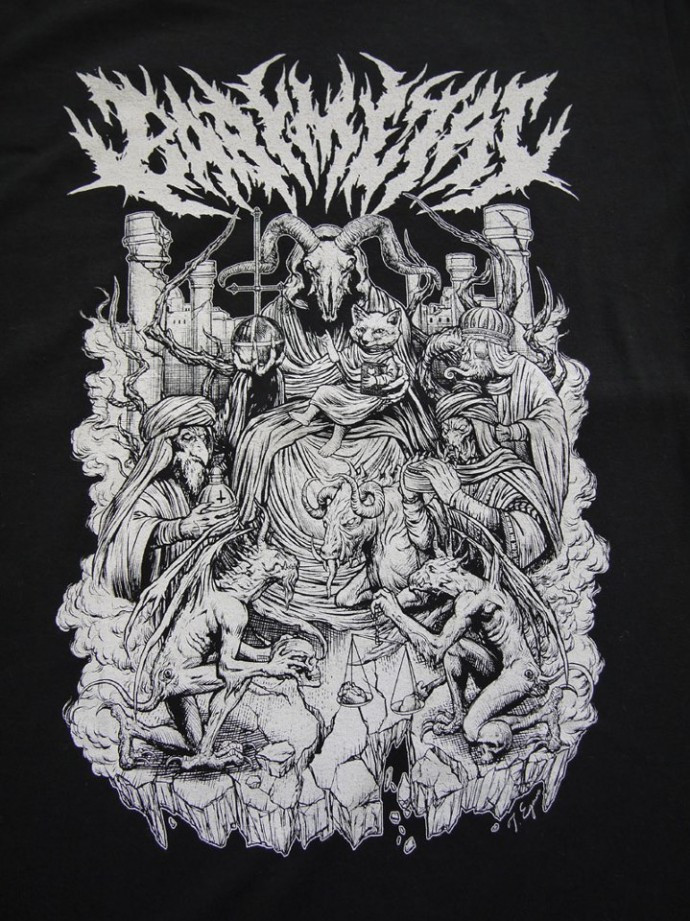 I don’t know if or when this thing will become available for purchase outside of Japan.  Phro found it on this Japanese web site:

Obviously, getting a Toshihiro Egawa shirt made for you with goats and skulls and Cthulhu tentacles and other occult imagery doesn’t change the sound of your music. It’s just marketing. But I’m still kind of impressed, because this is the kind of marketing that on its face isn’t geared toward mass consumer culture. I guess it could be a way of trying to establish some underground cred, but no kvlt metal fans are going to suddenly embrace the band’s music just because the band now have this shirt in their arsenal. 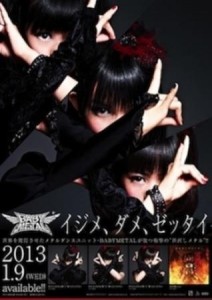 What I’d really like to know is who’s idea this was. It would be cool if the girls came up with it on their own. That would be a sign that in just a few years they’ll be getting all tatted up and pierced and throwing up their beer in shitty venue bathrooms and getting fat on crap food while high as kites. Y’know, like a real metal band.

While we’re on the subject of BabyMetal, I might as well mention that last week they released a new EP called Ijime, Dame, Zettai. The song “Ijime, Dame, Zettai” was released previously as a single, but the EP includes another track called “Catch Me If You Can”, plus alternate versions of both songs. For all I know, that second track was previously released as well — because, really, I don’t follow BabyMetal all that closely. Really.  I don’t.

The EP is available on iTunes now. Here’s the cover for it: 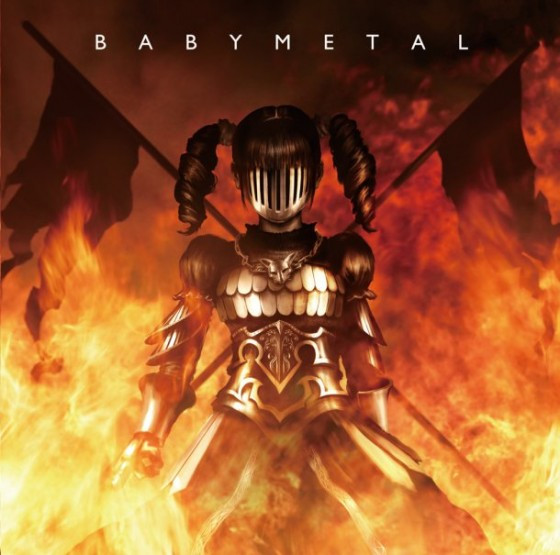 Okay, that’s all. I’ll let you get back to what you were doing.

6 Responses to “TOSHIHIRO EGAWA DOES BABYMETAL”