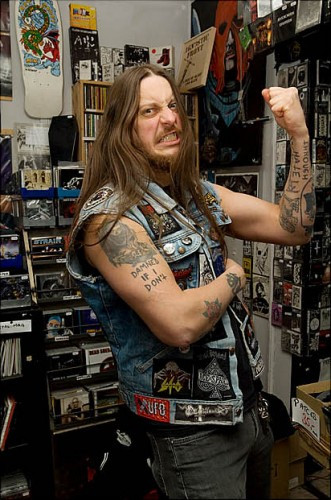 I sent some questions to Fenriz via email in late 2012. Judging by the candor of his responses, Fenriz doesn’t take himself that seriously either, but the man has a deep love of heavy music, and a whimsical conversation style penetrating the language and technology barrier.

The new record is called “The Underground Resistance,” and it sounds like a pretty ‘punk’ title. What went into choosing the title for the record?

It’s just the job that’s been going on fighting modern metal plastic sound for all our careers, and little by little the few of us became more and more since the early/mid 00s and now we see that 2012 was the biggest year yet for (for instance) the 70s organic sounding bands and early 80s heavy metal stands stronger than ever since the actual early 80s. job well done but the idiots are still aplenty.

I’m asking that because a lot of journalists have called your new output more punk-oriented than, say, Soulside Journey. Do you think that’s an accurate assessment?

If they think so, this strongly confirms my belief in the «well educated» metal journalists out there. ARVO PÄRT is more punk than Soulside Journey, haha

I actually haven’t heard the new record yet, otherwise i’d have more to say about it, but it’s only six songs long. Does that mean fans should expect a return to some of your longer song lengths, or a shorter (say, one side of an LP) album.

As we all know, a side of vinyl should be max 20 minutes long. Our album is a bit over 40 minutes, so we really pushed the envelope here, haha.

OK, enough about new material, you must be bored to death talking about it! 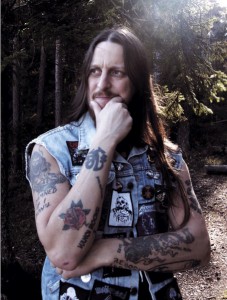 I wonder—do you listen to your own music recreationally, and if so which records?

I’d rather not, mostly it’s to prove points.

I’m curious what effect, if any, the “Until The Light Takes Us” documentary had on your life? It seemed to boost Darkthrone’s notoriety among music lovers on my side of the ocean. When I watched that movie, I felt that you were the person that received the most empathetic treatment from the film.

Haven’t seen the movie, I have no idea how I’m being portrayed. I guess many others would have to see a movie where they had one of the LEADS. But strangely, I never did. I must’ve been the least solitaire person in Oslo 1991-2001 as I practically lived at elm street (overemphasizing here, but you know what I mean). Musical solitarism is something else. Anyway I was filmed for that 12-10 years ago. That’s thousands of thousands of musical releases I’ve listened to since then. GROW

Besides the film, the other thing that’s really bolstered your cultural currency is your band recommendations. A lot of bands you’ve gone to bat for had their careers take off shortly afterward (Ghost, in particular). Do you feel any particular responsibilities as a tastemaker?

My taste has been cultivated since I got Morrison Hotel by the doors in 1973. I only show people what my taste is. The perfect one-way communication (there’s no forum) and on BAND OF THE WEEK FACEBOOK it’s Arjan that runs it. as I am not on face. (no time)

You’ve actually named some people I know personally in your band recommendations—Wastelander and Borrowed Time, to name a few. These are musicians from the underground scene in Michigan, where labels NEVER look for talent. Have you ever been to Michigan?

I’ve only been to Sweden, Germany, Denmark, Finland, England and once in the states to jam with Eibon. I loathe traveling and that’s one of the reasons I gotta turn down all DJ offers and live offers.

Wastelander and Borrowed Time are TYPICAL allies in the underground resistance; the organic old metal in sharp contrast to the sounds that has been majorly pushed by the advertisers since 89/90. Borrowed Time had a better demo than their first 7” (which I ordered 4 of to give to friends) but they have a new split 7” now that I haven’t heard. Also hoping they’ll do an album as I was never fond of the 7” format nor split releases of any kind (hey, it’s just a format thing, great music is great no matter what of course).

Are there any other local scenes that go largely ignored that you feel deserve special attention?

Well, when the thrash revival came only the daftest bands got the big attention. We’ve had killer thrash bands here since the mid 90s, doing dirty wild thrash (as the genre name suggests the style should be sounding like – thrash wildly, flogging etc) and many bands worldwide too, but the mall kids ended up being pushed to Municipal Waste. Nuff said. TURN BACK TRILOBITE!!

What do you look for in good music?

Often, it’s lopsided. First, Dream Theater is more lopsided than the rest, its more friction there, and friction is the reason why we are here. As frictionless means no babies, no pleasure. Only the ones that does not know better can get pleasure from the instant gratification sound. You know what I’m talking about? Anyway there are many exceptions from the rule, but I’m at a point where stuff I like, that I fear sounds too straight… probably seems very weird to the regular Joe.

Lastly, do you ever see yourselves disbanding Darkthrone?

And NO CLEAN SINGING? I’m  basically ONLY doing clean singing these days, hahah.

EDITOR’S NOTE:  The Underground Resistance is scheduled for release by Peaceville Records on Feb 25. Darkthrone’s official site is here and their Facebook page is here. The current Fenriz Band of the Week blog is located here.

Darkthrone are an Exception to Our Rule.  And Arvo Pärt is an Estonian composer of classical and sacred music. 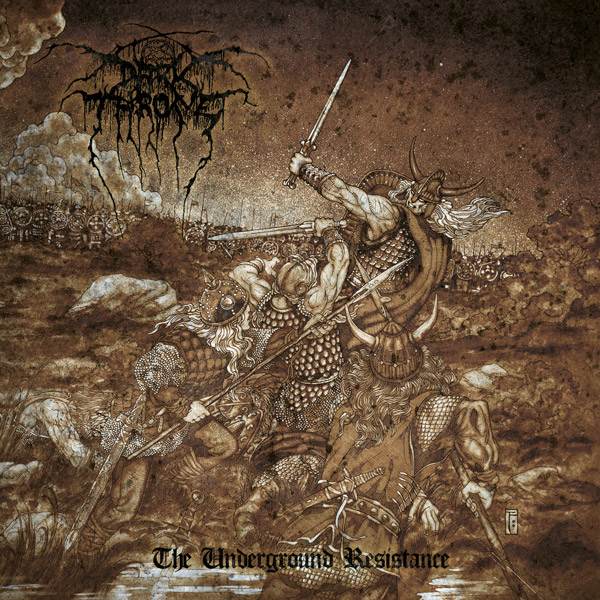 11 Responses to “AN NCS INTERVIEW: FENRIZ OF DARKTHRONE”