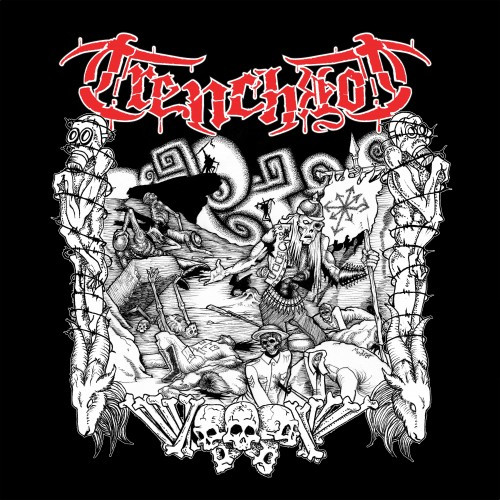 I know almost nothing about TrenchRot. They are from Philadelphia, and through a little web sleuthing I’ve figured out that their members include vocalist/guitarist Steve Jansson, who has split time between a speed metal band named Infiltrator and a sludge band named Grass. And beyond that, they’re a mystery. Except for their music; I do know about that.

Earlier this month TrenchRot posted a three-track demo named Dragged Down To Hell on Bandcamp. You can pay what you want to get it. The music is neither speed metal nor sludge, but death metal. TrenchRot’s beefy death metal stew has a strong old-school flavor but it doesn’t sound like re-packaged, cookie-cutter hero worship. The songs are distinctive, and galvanizing.

For the most part the three demo tracks blaze away at a thrashing pace, propelled by slaughtering riffs, squalling guitar leads, and a mix of percussive rhythms, all hell-bent on sonic demolition.  Where the pacing changes, it’s a drop down on all fours for a moaning, groaning death-doom crawl.

Jansson’s vocals are suitably disgusting, a raw, mid-range yell that approximates the sound of vomiting, but with words. They reminded me a bit of Martin Van Drunen (Asphyx, Hail of Bullets).

I think Dragged Down To Hell is a very impressive start. I hope we’ll hear more from this project in the future. Links and song streams are below.

2 Responses to “SHORT BUT SWEET: TRENCHROT — “DRAGGED DOWN TO HELL””