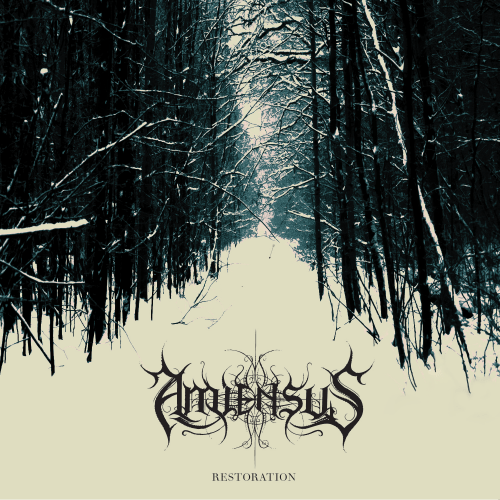 An unusual and unexpected delight, Restoration is a fine addition to the growing pantheon of American black metal – a style that I think has truly found its own identity, wearing its heart on its sleeve without regard for the judgemental restrictions of the established orthodoxy –  and will no doubt appeal to fans of Agalloch, Oak Pantheon, and Woods of Ypres. Yet its gloomy light and shrouded divinity should also find a home in the hearts of those with a love of the more emotive side of In Mourning and Swallow The Sun, to whose sound much of Restoration is a distant cousin.

Ostensibly a melodic, subtly progressive black metal act, with more than a touch of the earthen, resilient power of Drudkh, there’s definitely a dark beauty and pronounced gothic streak to be found on the record – particularly with the abundance of soaring, bleakly emotive clean vocals – which showcase a massive amount of potential and a laudable level of ambition and creativity from the Minnesotan five-piece.

The album starts off with the aptly named “Dawn of Release”, which builds from an ember of dark, haunting doom into a folk-inflected bloom of layered guitar work, mixing acoustic majesty, strained distortion, and willowy lead lines, topped off with a melding of anguished snarls and ethereal female vocals. The distinctive vibe of the material has more than a shade of Borknagar to it, with perhaps a few more ambient tendencies, while the middle section of the song features an impressive explosion of blasting heaviness and scintillating lead guitars that drive the song toward its calm, elegant finale.

“Deeper Than Blood” is a more concise piece of visceral power, all crackling harsh vocals and ominous keys, with definite shades of Abigail Williams in the mix – aptly enough, considering Ken Sorceron’s role as mixing/mastering engineer – culminating in a penultimate peak of blasting drums and searing guitars, which sinks into a chillingly melodic and depressive finale.

By contrast, a sense of post-metal ambience infuses “Become The Fear”, whose haunting frailty and vulnerable clean vocals slowly build toward an elemental eruption of gloom and doom, bursting with cathartic screams and luscious, fret-burning guitar work.

“Morgawr” is an aggressive, and depressive, piece of blackened artistry, effortlessly heavy, but with just as much intensity dedicated to its light and shade interplay of soaring clean vocals and gleaming, frost-wrought guitar leads. The pronounced use of keys and subdued symphonic elements adds a brooding melancholy to the group’s already weighty sound, while the decision to share the vocals between three of the band’s five members provides them with a varied and multi-layered approach, which they exploit here (and throughout the album) to express a whole spectrum of emotion.

An almost-ballad, the graceful opening of  “I Am” opts for a slow-burning, atmospheric approach, gradually unveiling layers of frost-bitten ambience and heart-wrenching sorrow, building to a thrilling conclusion of ascending lead guitars, rattling drums, and crashing chords, crowned by an achingly beautiful vocal performance.

The appearance of Ken Sorceron adding guest vocals to “Millenium” (one of the disc’s two +6min tracks) gives it a shot of pure black venom, his feral rasp playing off perfectly against the piercing clean vocals and jagged, stomping riffs. A lengthy interlude of soothing, seditious quiet and reflective moods has more than a hint of Ulver to it, sleepily seductive, yet possessing a dark undercurrent, lulling the listener’s attention before the track’s tumultuous conclusion.

The moody, brooding “Healer” is another track that errs on the softer side, relying on its evocative, proggy vocal melodies to draw the listener in. Very much a linear story in its own right, it peaks in the middle with a sudden eruption of colossal, doomy death metal, before sinking back into silence beneath waves of hypnotic guitar melody.

The epic, Borknagarian vibe of “Thanatos” is mesmerising, the restrained grandeur of the drumming mixing seamlessly with the crashing guitars and lofty keyboard symphonics and providing a perfect canvas for the track’s complex, captivating arrangements of glorious clean vocal lines, varying in tone and approach for maximum effect.

Ostensibly a ‘bonus track’, “Prometheus” ends the album with a complicated, clever amalgamation of folky-roots, furious, blistering aggression, and rapturous lead guitar work. Strummed acoustic chords add melodic accents to the ashen riff-attack and propulsive, energetic drumming, while the mesmerising, mournful chorus refrain is utterly unforgettable. Shameless solos and grandiose keys abound a plenty, but the nature of their arrangement, the interplay between blackened devastation and melodic cultivation, is a testament to the band’s balance of creativity and control.

Musically, Restoration is pretty fantastic, with some brilliant lead guitar work and a drumming performance that mixes restrained grandeur with occasional passages of blistering blast-work, erring more on the side of evocative creativity than chaotic extremity. Subtle keyboards add well-composed atmosphere and complex shades, while the elaborate guitar work expresses everything from crushing, mid-paced doom, to propulsive blackened ferocity, to poignant acoustic melancholy.

Where it really shines, though, is in the vocals, whose brilliant clarity and stark, emotional honesty help make the record truly stand out from the crowd. The interweaving of different styles and approaches is incredibly ambitious, but hits the mark more often than not, and allows the group to express a wealth of deeper emotions, in all their joy and sorrow, grief and rage, agony and ecstasy and loss.

Intelligently composed, and emotionally exposed, Restoration is, above all else, a rewarding musical journey. It’s an album of fire and ice, of frozen beauty and burning passion, with a truly distinctive voice all its own.

EDITOR’S NOTE: Restoration is available for download and as a CD on Bandcamp via the link below. The band’s logo design is by Cristophe Szpadjel, and the album art was created by Zack Morgenthaler. You can connect with Amiensus on Facebook at this location.