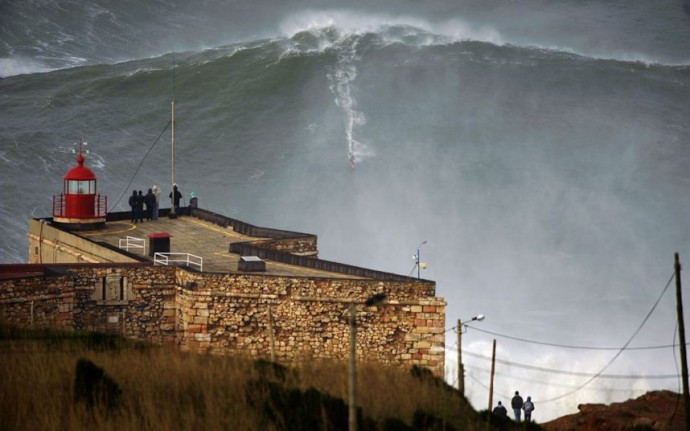 That’s a big fuckin’ wave, innit? If you look closely at the photo, you’ll see a puny human surfing down the face of that titanic wall of water.

That puny human is veteran surfer Garrett McNamara, and it appears that on Monday of this week (January 28) he broke the world record for the highest wave ever ridden. This one reportedly was 100 feet high (30.48m), though I have no idea how such things can be measured.

This took place off the coast of Nazaré in Portugal on Monday (January 28). It was reportedly 100ft high (30.48m), although that is subject to verification.

If the record is confirmed, McNamara will beat his own world record of 23.77 metres, which he achieved in 2011 at this same place after being towed into the wave by a jet ski.

And now for the real bonus — this event was captured on film, which you can see after the jump, long with film of McNamara setting the last record in 2011. But first, a few excuses by your humble editor.

I feel like Garrett McNamara at the moment.  I’ve been swept along by a big fuckin’ wave of work and travel that will prevent me from adding any more content to the site today.  Most of the blog time I’ve had over the last 24 hours was devoted to trying to pull together all the songs in our Most Infectious Song list in a single place . . . and I didn’t even get that done.

Anyway, I should be down off this wave, hopefully in one piece, this weekend.

Now, watch Garrett McNamara and be amazed (the video from 2011, which is the third one below is even more amazing to watch than the first two).

3 Responses to ““THAT’S METAL!” – BUT IT’S NOT MUSIC: THE BIG FUCKIN WAVE EDITION”