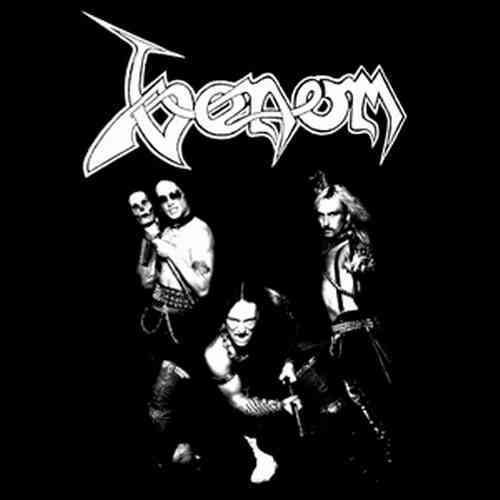 On April 2, 1986, the seminal British metal band Venom played a gig in Trenton, New Jersey, at a punk club called City Gardens. Also on the bill: Black Flag, as then fronted by Henry Rollins.

Legend has it that a Black Flag roadie recorded the entire show — and then cut out all the songs in Venom’s set except a few nano-seconds of the guitar intros and outros, leaving behind the between-song stage banter of Venom’s frontman Chronos. The only part of that story that’s legend is who did it — because someone plainly did.

This 8+ minute bootleg montage of Chronos communing with the punks, metalheads, and assorted refugees from the law in the audience was subsequently released as a seven-inch “single” on the Ecstatic Peace label. Somehow, I’d never heard this until a good friend sent me a link to an mp3 of the single yesterday.

Let’s just say it’s not the finest example of metal stage banter, but let’s also say that it’s representative of the majority of metal stage banter, which is to say that it’s a caricature of itself. It’s dumb, meaningless, and unintentionally funny, but also kind of endearing. To quote one blogger who wrote about this in 2009, “There’s a lot of Spinal Tap in so much heavy metal…”

Here’s my theory about stage banter: the more into the music you are, and the more fucked up you are, the more willing you are to applaud and yell over utter nonsense being uttered on stage between songs. If you think a band is killing it with the music, you’re more inclined to convince yourself that the frontman is killing it with his repartee, too.

Or maybe you actually realize that the banter is knuckle-dragging gibberish, but you’re willing to cut the dude a break because the music is so fuckin’ good, and because it’s fun to be talked to by someone whose music you dig even if he can’t hear you talking back.

On the other hand, when you come across someone who really DOES have excellent, clever, funny stage banter — or ultra-serious banter that actually makes sense — it’s a big bonus.

There’s no bonus in this Venom montage, but you know, it’s a bit of fuckin’ history and it is pretty entertaining as an unintentional parody. Check it out, and as you listen, here’s a question that you might consider answering in the Comments: Of the metal bands you’ve seen live, who had the best stage banter?