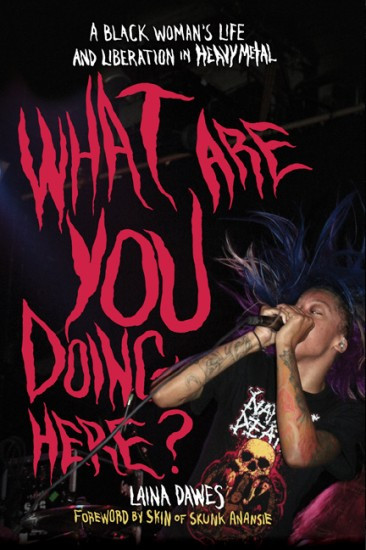 I think Ian Christe’s Bazillion Points Books is one of the most important forces in metal culture, as well as music publishing in general, today.

Then again I’m biased: I used to work there. The vast majority of my time at Bazillion Points was spent working with Ian on Metallion: The Slayer Mag Diaries, but one day Ian passed me a thick stack of paper held together by an overtaxed paperclip. The byline read: Laina Dawes. It was a brisk, easy read about the struggle of black women in the heavy metal scene. Up until that point, I wasn’t aware that there were any black women in metal—ever. Therefore, I was part of the problem. The rest of the details are fuzzy, though I recall a great deal of discussion about Skunk Anansie, a band I had not yet listened to.

That paper, ‘What Are You Doing Here,’ was the first book pitch I ever edited. Four years later, I hold the final product in my hand. I’m not sure if the edits I made ever found their way into Ms. Dawes’ book—probably not; I did a really shitty job!—but whatever changes she made were for the better.

What Are You Doing Here? is one of the most necessary books on heavy music in circulation. It ignores, for the most part, the evolution of heavy music out of rock and roll, and completely shuns the sub-genre debate. And it is stronger for it. Compared to the struggle of non-whites and non-males in our society, debates over the relative quality of one album to another feel moot. 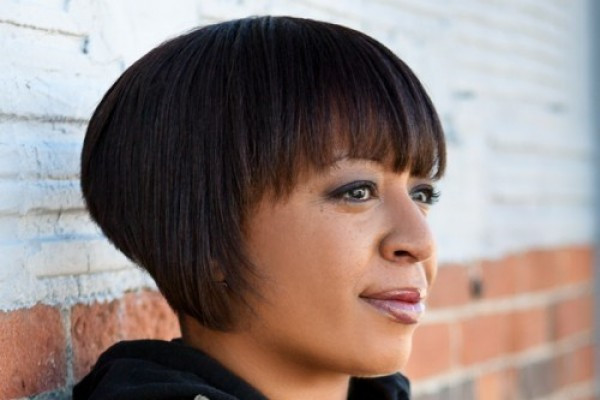 What Christe and Dawes have created is a to-the-point book. One could read it in an afternoon. The introduction by Skin of Skunk Anansie is worth the price alone. Dawes writes in a conversational first-person perspective, but leaves much of the talking to the various black women in metal Dawes interviews. These women’s stories sometimes inspire and sometimes enrage the same way the best metal and hardcore music does. Militia Vox now holds a special place in my heart—her flame burns hottest and longest, and should she ever abandon Judas Priest cover bands for an original project I will gladly listen without any interruptions.

Autobiographies and biographies excepted, most  music books of this sort chronicle a genre from beginning to end, and leap from locale to locale, covering many subjects at once. It would have been easy for Dawes to just say ‘the first black woman in metal was ___’ and go on from there. She does not do anything like that. The book reads, in a sense, like an anthology, a series of smaller anecdotes framed by Dawes’ wider journey. Sometimes she became my Rod Serling in the Twilight Zone her interviewees live in.

Other times, Dawes herself  takes the role of protagonist in a story with no clear villain. What could have easily been egotistical or whiney is neither. I related to her even more than I did with Ian in Sound of the Beast. Christe’s book enticed my endless hunger for information and desire to catalog, to curate, but Dawes’ book captures my rage—to me there is no emotion more central to heavy metal. Nerdiness is metal’s fuel, but righteous indignation is the flame itself. What Are You Doing Here? begins with her childhood as an adopted daughter in Canada—every adjective in her looks contrary to her surroundings. It’s the sort of radical displacement that many angry youngsters identify with, but Dawes’ experience seems worse than almost any teen angst I could imagine.

As the book progresses, it becomes at once a history of black women in hard rock/heavy metal, and Dawes’ search for a home in the genre. Virtually every step along the way was fresh and new. Her examples are marvelously quirky, from the bands she espouses—in particular Mother’s Finest, a fine proto-metal act that owes her a debt of gratitude for their spotlight in this work—to the historical sources she draws from—the story of Saartjie Baartman comes out of left field and twists the book into its darkest third segment. Dawes’ personal anecdotes feel lived in. As hard as she is on everyone around her, Dawes is hardest on herself, as proven in a recurring story about a woman in a Napalm Death shirt with whom Dawes ponders striking up a conversation, but never does.

If you’re reading this, Napalm Death woman, you should find Laina Dawes and thank her for immortalizing you.

Metalheads come across as Dawes’ home tribe, but she does not spare us. Everyone takes their licks. Phil Anselmo’s now-legendary racist tirade takes perhaps the hardest blow, but the majority go out toward the nameless mobs of hashers that casually fall into racism, sometimes not out of hate but out of a desire to fit in. For a nonconformist subculture, we can certainly rest too comfortably in our uniforms. Dawes turns her pen on non-metal loving African Americans and African Canadians as well. She displays those truths bleeding the paws of liberal academia: too often women are the enforcers of patriarchy, too often blacks enforce their own segregation. Dawes records instances of both. While metal culture could be a safe harbor from the hypocrisies of the mainstream, it fails more than it succeeds.

What Are You Doing Here? is a success story — not the story it tells, but its very existence. Its sales figures, and widespread media coverage, are proof at the very least that people want to get better. Maybe the gloves come off, now. I’m sure there’s some people who are furious that this book even exists. Fuck them. Their places in this culture are replaceable. Dawes’ book opens the door for outsiders to enter, get interested, and start headbanging. I’m sure they exist already: adventurous people of African descent with an ear for abrasive music and a hunger for the devil’s music. They have a place with us; neither melatonin nor chromosomes matter in the pit. If you don’t believe that yet, go into What Are You Doing Here? with an open mind. It can change your mind—and it comes highly recommended.

EDITOR’S NOTE: Softcover copies of What Are You Doing Here?: A Black Woman’s Life and Liberation in Heavy Metal, can be ordered from Bazillion Points via this link. The book is also available in eBook form via the Amazon Kindle, Barnes & Noble Nook, Apple iTunes Books, and Kobo platforms.

You can find out a lot more about the book at this location:

And below you can check out a 20-minute January 2 interview that Ms. Dawes gave on the “Soundcheck” show on New York City’s radio station WNYC 93.9 FM.

3 Responses to “BOOK REVIEW: “WHAT ARE YOU DOING HERE? A BLACK WOMAN’S LIFE AND LIBERATION IN HEAVY METAL””