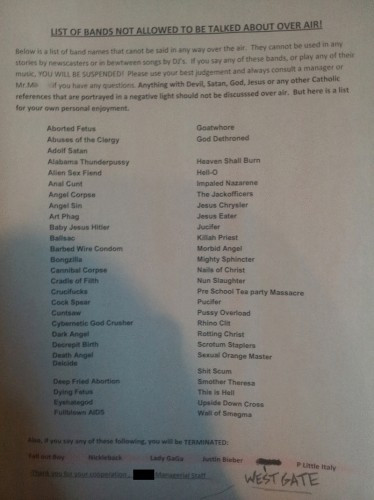 This little story originally reported on gawker has been making the rounds on the internetz this morning, and it’s just too good not to share.

According to a notice posted on the employee bulletin board at Seton Hall University’s heavy metal radio station WSOU, uttering any band names or playing any songs with the words “devil,” “Satan,” “God,” “Jesus,” or “any other Catholic references that are portrayed in a negative light” will result in suspension.

But to take any guesswork out of which band names aren’t appropriate for the airwaves at “Seton Hall’s Pirate Radio,” the management drafted a list of the 53 dirtiest band names that you can never say on the radio, a la George Carlin’s iconic monologue about TV.

Completely understandable and appropriate. Seton Hall is, after all, a private Roman Catholic university (located in New Jersey), the Archbishop of Newark is the president of its Board of Trustees, and lord knows that the Catholic Church has never tolerated filth, depravity, or degradation . . . except among minor church functionaries known as “priests”, but that doesn’t count.

I’m sure the metal lovers at Seton Hall will survive this effort to censor their radio station, so it’s not like this is worth taking to the streets in protest. I mean, really, who gives a fuck?

I’m enjoying this story much more for the band names on the list. If you click on the image at the top of the post, you’ll see a bigger version of it so you can better make out such excellent names as Ballsac, Barbed Wire Condom (I guess they’re on the list because the name relates to birth control?), Deep Fried Abortion, the Jackofficers (what’s satanic about beating off? I always assumed that was a staple of celibate life), Mighty Sphincter, Rhino Clit, and my personal favorite . . . Wall of Smegma.

I actually have my doubts that this really represents an edict from the powers that be at Seton Hall, as opposed to a bit of student humor, but whatever it is, the list is a good start — one that can be improved upon. Your suggestions in the Comments are welcome.

19 Responses to “BAND NAME CENSORSHIP: LIPS THAT TOUCH THESE NAMES SHALL NEVER TOUCH MINE!”