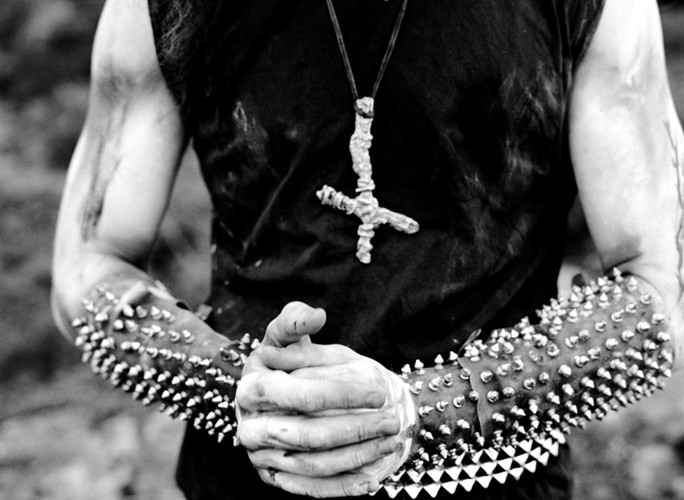 (We’ve got something different for you, something I hope will provoke thinking and discussion.  This begins a 5-part post by cultural anthropologist [and metalhead] David Mollica on the subject of metal culture, based in part on extensive field research in bars.)

Hey NCS readers, Islander has kindly allowed me to talk at you about the metal community and why we do what we do for a little bit. I’m going to cover the whole media perception, violence, and counter-culture thing first to get it out of the way, then move on to some more interesting stuff in later posts. So first a little background:

I study cultural anthropology and mass media in addition to being a metal head and thought it would be cool to mix a little fun with my serious business. So, a couple years back I somehow managed to convince my adviser that letting me hang out in bars and listen to Iron Maiden was a legitimate form of fieldwork for my Master’s dissertation. The end result was a rambling 33 pages of material, some of which I’ll be talking about here. Since most of my field work took me to places where I had to keep up with the livers of London natives I may have missed a few things, so feel free to voice your thoughts in the comments. I like discussion. If you want a copy of the paper email me at gilderling@gmail.com.

Let’s start with a question you might not think about all the time: Why do you like Heavy Metal and what got you into it in the first place? Not only is this stuff grim, aggressive, angry and over the top, but we also see those things as standard positive qualities of the music. We expect macabre subjects and weird note progressions. So what drives us to listen to this instead of more mainstream or easy going stuff?

When I asked people that question during interviews I got a lot of different answers ranging from the music being more lively and authentic, good for letting out steam, to feeling that the music spoke to them on an emotional level that radio friendly stuff never could. However, the best answer I’ve heard to that question came from my friend Edward Banchs, a venerable fellow who writes about metal and Africa on the interwebs, when he told me that metal is ‘just being honest, like life’s a struggle you’re going to have to fight to go on’. We are also pretty hardcore about our love of the music, which drives away casual listeners who think we take this stuff too seriously. Finally, every person I interviewed thought of themselves as a lifer. They were stuck in and even if they didn’t like going to shows anymore they still felt comfortable around other metal heads and continued to listen to the music.

But then again, everyone else seems to hate this stuff. I mean, I once read a psychological study about subjective musical taste that was titled Anything but Heavy Metal! For decades popular media, fundamentalists, and governments have taken issue with this music. From the PMRC in the 1980’s to Moroccan metal heads being charged with what basically amounted to treason a few years ago because of the music they listened to, the perception of metal heads as young, degenerate, violent, and unproductive persists even though that clearly isn’t true…for the most part. There will always be people like this guy to make us look like the special flowers the media portrays us as. Most of us have jobs, have gone to college, have families and function just like everyone else, but much of the dialog in popular media is tied up with presenting the music as an influence that can literally kill your children!

All the people I interviewed and hung out with, including those at concerts, were functional adults with responsibilities. I focused on adults because the contradictions between popular belief and reality were too striking to ignore, though it also allowed me to reconcile the need for cultural participation and observation (what we call ethnography) with hanging out in metal bars and drinking with people I liked. On a related note, if you are ever in central London I strongly suggest checking out Crobar; it is just about the coolest bar in the world. Most of the academics who had done field work with metal heads had relegated themselves to major concerts in the United States and Europe, interviewing people who they didn’t spend any time with on a regular basis. They saw mostly younger, white males because those are the people who show up at North American and European festivals the most (more on this in later posts).

My research and experience have led me to believe that established power structures hate metal so much because the music adopts oppositional codes in almost everything it does. For example, we probably like songs about Satan so much because it is in opposition to established religious norms, not because we are all evil doers out to sacrifice delicious goats and join suicide cults. We like crazy discordant note structures, growling vocals, and messed up rhythms because it opposes a mainstream song writing style that many of us find outright boring. We can understand and identify with the anger, sadness, and oppositional thinking because that is, in some way or another, how we think and feel. That’s also why it gets pigeon-holed into the realm of rebellious youth culture, specifically viewed as music for ‘young, white, disillusioned, middle class males’.

So what’s my point in all this? Just to say something that most of us know already: Much like any other social group, metal heads build up their communities based on things they have in common. We all like metal so we hang out together when we can. Political and religious beliefs can become irrelevant, at least temporarily, as we form a group of friends and acquaintances around stuff we like. We aren’t that different from anybody else as people, we just happen to like some weird shit and maybe feel a little differently about the world. So metal gives us that nice little point in common that transforms a stranger from some guy with long hair to a decent dude who shares some of the same interests. It makes him look more like a person, so we find it easier to talk to him. That’s how social groups form, it’s why the nerds and the jocks don’t hang out together, and we do it too.

David is an over opinionated contrarian, general antagonist, and semi-professional examiner of musical culture. He is equally likely to be reading about economics so he can argue about it better as he is to be banging his head to some old school thrash metal. He writes for Underground Entertainment in Altoona, PA and plays bass in Black Sun.