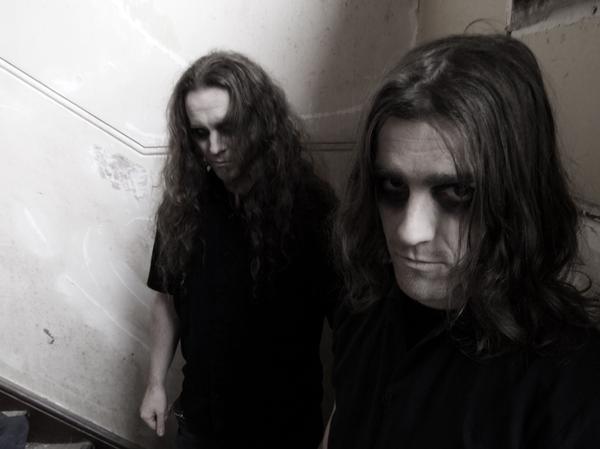 (In this 32nd installment of THE SYNN REPORT, Andy Synn reviews the full-length discography of a band from the depths of Tasmania — Ruins.)

I’ve had this band primed and ready to go for a while now, but I’ve been waiting for the right moment to unleash it. With the release of their fourth album Place Of No Pity at the tail-end of last year, now seems the perfect time to introduce you to the cut-throat black metal of Ruins.

The Tasmanian twosome (Alex Pope on vocals and guitars, David Haley on drums – recently upgraded to a full quartet) started weaving their black magic in 2004 with the Atom and Time EP, and have since unloaded four lethal rounds of their brutal, remorseless attack into the world.

The guitar tone is the sound of a man strangling the life out of his instrument, wringing every drop of black blood from the contorted strings, the vocals a blast-furnace bellow of pestilential misanthropy, and the drums… Well, it’s the one-man wrecking machine David Haley behind the kit, delivering an overwhelming barrage of sonic devastation and brooding, slithering groove. 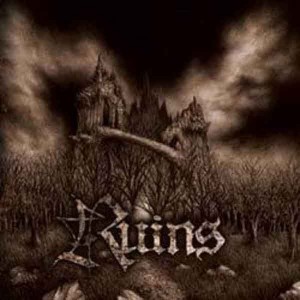 As debut albums go, Spun Forth As Dark Nets is as vicious and as virile as they come, the title track kicking things off with a vicious flurry of rib-cracking kicks and scathing riffage, topped with Pope’s ragged, snarl. The hammering footwork and snappy, chaotic snare flurries drive the song onwards at an unerring pace, while imposing pillars of thunderous doom play off against lightning flashes of dissonant angst and contorted, blackened chord patterns

The suicidal atmosphere immediately apparent on “Cold Dark Sea” has more than a hint of Shining’s self-destructive nihilism to it. The harsh chords wash over the listener in waves of focussed negativity, while the lurching, mid-paced riffs and sharp, jagged hooks have a bleak industrial misery all their own.

With a burly antagonism reminiscent of Immortal at their most blizzardly, along with a cadaverous barking vocal performance not a million miles away from Abbath’s beastly delivery, “Draw Near The Ice” detonates like an atom bomb of frozen aggression, spraying dissonance and shrapnel, and leaving behind a smoking crater of strained, crippled chords and anguished disharmony.

“No Trace Or Rumour” begins as a full-bore, charging number of skull-caving drumming and vituperative riff-work, undercut by a darkly resonant string of melody, before opening up into a slower, more ominous piece of noxious, choking riff-clouds and sucking, gut-wound bass-lines which drags and crawls at a sickening, poisonous pace, interspersed with moments of lunatic, frenzied violence.

The malicious contempt embodied by Pope’s wrenching vocal performance on “The Ends Of The Earth” is matched only by the massive power of its death-metal tinged riffage, the song being an absolutely head-crusher of scattergun blast work and abrasive, sandstorm guitars which carve and mutilate with sadistic glee.

Utterly unforgiving, Spun Forth As Dark Nets is about as rabid, and ravenous, a statement of intent as I have ever come across. 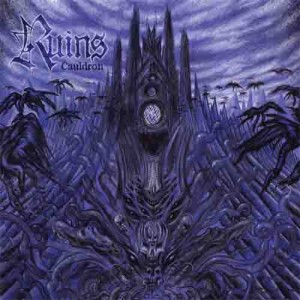 The blighted aggression and haunted alienation of Cauldron is the sound of a band rubbing filth and dirt into their wounds, yet at the same time displaying the fruits of their labours with a slicker, sicker, and more punishing aural delivery.

The chilling atmosphere of “Where Time Is Left Behind (Echoes Of Ghosts)” sinks deep into your bones, before fracturing them with a monolithic metallic assault of steely riffage and iron-clad drums. Calamitous chords crash and clash with chiming disharmony beneath the relentless onslaught of David Haley’s gale-force kicks, while the final bars see an unexpected transformation occur, kindling a black flame of melody atop an altar of stuttering, limbic rhythms.

The serpentine undulations of “Threshold Forms” ripple and writhe in ecstatic anguish while Pope’s vehement vocalisations declaim death and calamity, his groaning, strangled moans channelling the ghost of Celtic Frost. Twisting and turning, the song liberally vomits up chunks of sullen, infectious riffage and pulverising drumming, shot through with a virulent strain of viral melody.

The brutally titled, and brutally delivered “Hanged After Being Blinded” executes its mandate with malevolent intent and fanatical focus. Blade-like chords glimmer with malice as the drums beat out a cavernous cadence, while the vocals spit forth a scalding stream of vile imprecations. Throughout all this, rock-hard undercurrent of leather-clad, thrusting beats gives the song a rapacious, sexual undercurrent.

Dedicated disciples of Satyricon, the band weave a monstrous, hypnotising hymn of horror on the 7-minute monument to misanthropy that is “Genesis”. Accenting their remorseless aggression with mesmerising sub-conscious hooks and a plethora of monstrous-riffs, the gruesome twosome gleefully taint their recipe with a heavy helping of gargantuan grooves and a touch of Satanic, bluesy nihilism.

The eerie cold of “Suicidal Pulse” conjures shades of demonic degradation, dark introverted passions and cynical self-loathing set to the violent strains of the band’s blistering, frantic black metal. Unforgiving and unflinching in its base instincts, it’s also sickeningly compelling and catchy, the riffs squatting on your brain like a many-tentacled thing of horror.

Ugly and hopeless, yet never anything but captivating, this is a truly visceral listen, start to finish.

Sample song: “Hanged After Being Blinded” 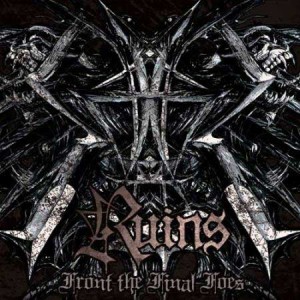 Heavier and harder than its predecessor, Front The Final Foes has more of a Goatwhore-esque grind to its pitch black glorification, yet where the Bayou-dwelling black metallers go in for belligerent, pugilistic aggression, the Tasmanian devils go for a more brooding, predatory vibe that sets them apart from both their peers and influences.

“Breath of Void” marches, rather than swaggers, into town, claws sharpened and teeth bared, looking for a fresh victim. Its scything, diabolical guitar riffs shudder with hatred, held in check by David Haley’s lithe, loose-limbed precision behind the kit. Psychotic explosions of sonic violence shatter the song’s knife-edge tension as the band ricochet between raging extremity and heaving enmity.

“The Sum Of Your Loss” is a morbid vision of creaking rhythms set atop a foundation of piston-driven drum-work. The angst-ridden vocals and mercurial guitar lines insinuate themselves beneath the skin with an oily, repugnant grace as the song’s unrepentant bleakness takes a terrible emotional toll, lightened only by  injections of potent, struttingly arrogant, riffage.

Tortured and tormented, “Cult Rapture” is a furious scorcher of a song whose skin-shredding, shape-shifting riffage is perfectly complimented by Pope’s gravelly, sandpapered vocals. Guitar-focussed and ruthlessly aggressive, it winds razor-wire tremolo lines and punchy, pugnacious riffs together into one skull-crushing shock to the system.

The total and complete desolation of “Annihilate” is more than just a crushing bulldozer of a song, accentuating its bone-grinding heaviness with a frostbitten edge of emotionless void. Black-hearted and soulless, the warping, repetitive riff work showcases the band’s love for Volcano-era Satyricon, while the sheer intensity of Haley’s drumming could give Frost himself a definite run for his money.

The lean, mean, and efficient killing machine of “Hallways Of The Always” delivers an avalanche of carving tremolo guitars and ear-splitting, hammering snare-hits, tied to a black cascade of cruel disharmony, which reaches its peak in the tracks monumental, domineering chorus refrain.

The album ends on “With These Winged Words”, whose leviathan coils of looping bass-lines and hissing riffs stalk and slither around the crumbling granite edifice of Pope’s cracked and broken vocal delivery, tightening their grip and choking the life from his very last gasp. Over 7 minutes of lightless, constricting horror and searing, flesh-scarping venom later, the song culminates in a despairing funeral-dirge of rotting, leprous chord progressions which fade slowly into dark, empty nothingness.

Titanic and merciless, this album is an absolute hammer blow of formless, relentless hate – for everyone, and everything. 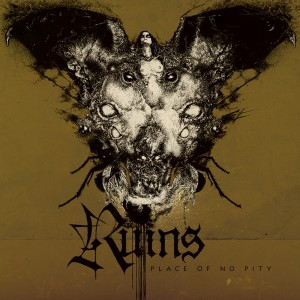 Late last year the antipodean assassins came back with a vengeance, unleashing their fourth album Place Of No Pity, and while it slipped through the cracks of my year-end round-up (I did have it, but not the time to write it up properly), it continued the band’s legacy of brooding, bruising black metal.

Kicking off with a guttural “Urgh!” that would make Niklas Kvarforth proud, “A Lesson In Ruthlessness” marches brazenly down the left-hand path, locked in step by sequences of crisp rolls and scatter-shot fills. Moving from a moody, chugging stomp to a raucous, hammering pace it hooks the listener in with its raspy, death-rattle vocals, finally culminating in a savage, neck-snapping finale.

“Death Lends The Ultimate Touch” is a hypnotic, droning miasma of a song, with a thick, choking bass presence and a sleek, agile drumming performance. The grey-clouds of melody which hang over the track give it a very distinctive character, and allow the song to flex its muscles with some razor-clawed tremolo runs, and feral, rapturous melody lines which scintillate and shimmer with dark promise.

The voracious “Place Of No Pity” strikes hard with its towering guitars and burly, blasting drums, brutalising the listener with nine minutes of prime-cut black metal riffage and pounding, elephantine rhythms, leading into the all-destroying tumult of “Desolation”, which marries contorted complexity to an industrial sized, guitar-based assault. Heaving, heavy, and sadistic, the rampant aggression displayed is tempered by a forlorn, depressive atmosphere and a shroud of despondent melody.

A haunting, cursed vibe permeates “Let Them Perish”, a gutter-dwelling, desolate composition whose scathing, repugnant guitar tone is backed up by an infernal drumming performance, courtesy of Haley’s furious feet, the track, wallowing in its own self-inflicted misery right up to its sludgy, grief-stricken conclusion.

Moving back and forth between hellish hammering and a burly, loping swagger, the aptly named “Merciless” closes the record with a combination of harnessed hatred and sinister resonance. Pope and his brethren peel off dissonant, paint-stripping riffs from their instruments as if their lives depend on it, all the while layering them with nagging, narcotic anti-melodies and caking them with grisly vocal grime.

Absolutely murderous, every aspect has been sharpened to a lethal point, leaving behind bleeding physical and emotional wounds which refuse to heal.

Sample song: “A Lesson In Ruthlessness”