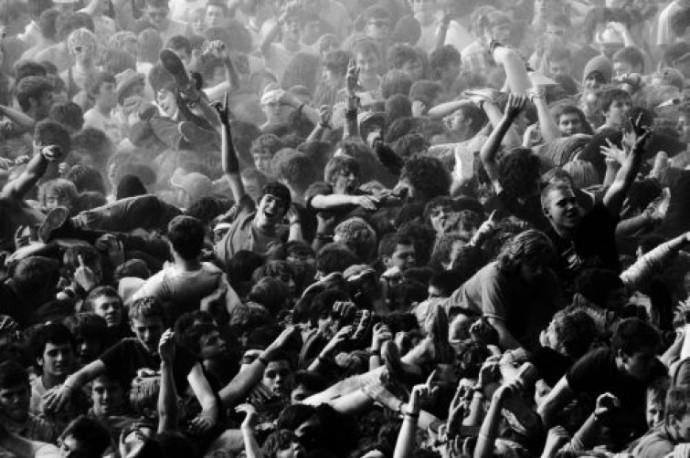 “Human collective behavior can vary from calm to panicked depending on social context. Using videos publicly available online, we study the highly energized collective motion of attendees at heavy metal concerts. We find these extreme social gatherings generate similarly extreme behaviors: a disordered gas-like state called a mosh pit and an ordered vortex-like state called a circle pit. Both phenomena are reproduced in flocking simulations demonstrating that human collective behavior is consistent with the predictions of simplified models.”

Thus reads the abstract for a scientific paper published today with the title, “Collective Motion of Moshers at Heavy Metal Concerts”. The authors are four gents at The Laboratory of Atomic and Solid State Physics at Cornell University in upstate New York. To avoid confusion, allow me to repeat: This was written by actual scientists, not stand-up comedians.

The authors described pit action as follows, “Often resulting in injuries, the collective mood is inﬂuenced by the combination of loud, fast music (130 dB, 350 beats per minute), synchronized with bright, ﬂashing lights, and frequent intoxication.” Stunningly, they observed that “[t]his variety and  magnitude of stimuli are atypical of more moderate settings.”

They expected to find a broad distribution of speeds and chaotic movement that could not be “well described by simple analytic expressions.” Instead, they found that mosh pits closely resemble the equilibirum state of molecules in classical gases.

The researchers performed their study by gathering YouTube videos of mosh pits and circle pits and then used particle image velicometry techniques (whatever the fuck that is) to measure the collective motion of moshers, after correcting for camera shake and distortions in perspective.

They then used “a standard flocking simulation software” (whatever the fuck that is) to simulate the observed behavior — and they found a close fit between the simulations and what they observed in the videos. I enjoyed this description:

“Thus, we use a Vicsek-like model to simplify the complex behavioral dynamics of each human mosher to that of a simple soft-bodied particle we dub a Mobile Active Simulated Humanoid, or MASHer (SI). Our model includes two species of MASHers to reflect the typical crowd at heavy metal concerts. Active MASHers are self-propelled, experience flocking interactions, and are subject to random fluctuations in the forces they experience. Passive MASHers prefer to remain stationary, and are not subject to flocking interactions or random forces.

Though initially both populations are uniformly mixed, we found that with sufficient time the flocking-interaction leads to a spontaneous phase separation with a dense population of active MASHers confined by passive MASHers.”

Honestly, I don’t pretend to understand much of this, except for the surprising conclusion that what looks like the utter chaos of a mosh pit turns out, at some level, to be predictable and stable.

It also wasn’t evident to me how this kind of study could have contributed to anything, er, useful — other than the amusement of confused metal heads.

HOWEVER, I then came to the part of the paper in which the authors concluded that “heavy metal concerts [provide] a unique model system for reliably, consistently, and ethically studying human collective motion.”

Further studies in this unique environment may enhance our understanding of collective motion in riots, protests, and panicked crowds, leading to new architectural safety design principles that limit the risk of injury at extreme social gatherings. Moreover, these concerts have the further advantage of exhibiting a rich variety of states such as the wall of death (moshers split into two groups separated by an open space and, when signaled, simultaneously run at the opposing group), collective jumping (locally correlated, globally decorrelated), and soft modes in jammed attendees. Thus, the extreme conditions at heavy metal concerts offer new opportunities for studying a wide range of collective behaviors that arise in extreme social gatherings of large human groups.

If you’re interested in learning more, you can download the entire paper via this link. And below are some of the videos used in the study:

(Thanks to Sylvia, Phro, and Vonlughlio, all of whom tipped me to this study.)

7 Responses to “MOSH PITS ARE A GAS”